Back to Profile Gallery > Atlantic Petroleum

Atlantic Petroleum is an independent Faroese exploration and production (E&P) company with oil and gas interests in the North Sea, the Celtic Sea, and on the Faroese Continental Shelf.

These assets include 14 licenses containing over 30 fields, discoveries, and prospects. Atlantic Petroleum was founded in 1998 by eighteen Faroese investors, with the aim of using the first Faroese oil and gas licensing round as a basis for entering into a partnership with strong international oil and gas companies. In line with its long-term strategic goal, the company expanded its activities into UK waters in 2001, and two years later acquired a package of assets from Premier Oil plc including three field discoveries – Chestnut, Ettrick, and Perth. In 2008, Atlantic Petroleum discovered the Blackbird field, in close proximity to the Ettrick field. Blackbird is currently being developed for first production in 2012. 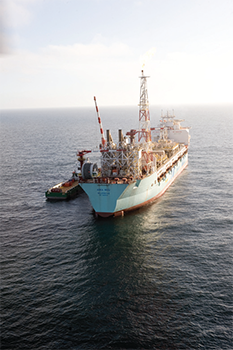 The concept behind the business is investment in smaller prospects or discoveries, which do not typically lie within the focus of larger E&P companies, and to be a minority partner in a high proportion of ventures. At present Atlantic Petroleum has partnerships with 15 international oil companies operating in north-west Europe. As global oil resources become more difficult to obtain, Ben Arabo, CEO, explains how this approach benefits the business in the competitive E&P industry: “Typically we look for equity opportunities in both exploration and development ventures of approximately ten to 20 per cent. Not only does this help limit our risk on any single project, but having a greater number of ventures provides us with a better chance of success in the exploration aspect of the business.”

Currently it is not part of Atlantic Petroleum’s strategy to operate licences itself, however the company works in close collaboration with the operator, using its extensive geological, geophysical and engineering insight to contribute to the successful maturing and development of the licences. Exploration on the Faroese Continental Shelf is still in the early stages, and combined with the area’s difficult geology, this makes ventures in this region more high risk in terms of making commercial discoveries. Atlantic Petroleum complements these more high risk, high reward ventures, with its present production fields of Chestnut and Ettrick and exploration ventures on the UKCS, providing it with short-term gains whilst it develops its longer-term prospects.

Focusing on the core competencies of the business, Ben says: “I believe the main strength of Atlantic Petroleum is that we have a complete value chain, from exploration, through appraisal, to development and production. At present our production is approximately 2900 barrels of oil a day, which makes us quite unique as a small company as it provides us with significant cash flow to expand and fund exploration activities ourselves. This, combined with our experienced exploration, team enables us to react quickly to attractive new ventures as they arise in order to strengthen our portfolio further. Primarily we look for equity in ventures located in areas that we know on a technical level, which are close to our existing infrastructure.”

Having initially gained a 3.75 per cent equity share in the UK Perth field in 2003, Atlantic Petroleum last year increased this to 6.62 per cent following the sale of some other license partners’ equity. The company also recently announced that it has signed an agreement with Nexen Petroleum UK Ltd to increase this by an additional 4.18 per cent. The prospective oil volumes of the Perth field are thought to be large, however there is still risk attached to the venture due to the complicated development process. Despite this, Atlantic Petroleum sees the field as a potentially high yield venture, and is supporting the operator’s aim to submit a field development plan this year with first oil production possible in 2013/14. Atlantic Petroleum was also successful in the UK 26th licensing round in October 2010, gaining two new exploration blocks – Anglesey blocks14/9, 14/14a & 14/15, operated by Bridge Energy, and Biscuits block 21/30e, which is also operated by Bridge Energy, alongside additional partner Idemitsu Petroleum.

Despite the North Sea being considered a mature market in the oil and gas industry, Atlantic Petroleum continues to identify and capitalise upon profitable ventures in this region. With these activities contributing to the company’s objective of developing commercial offshore oil and gas assets in north-west Europe, Ben concludes with Atlantic Petroleum’s aspirations: “Naturally the development of the fields themselves is a substantial expense but now with Ettrick and Chestnut up and running we are seeing very good rates of return. The oil price has risen tremendously over the last year, and this has been very beneficial to us in the short-term, in terms of our share prices and overall earnings. If we find ourselves constrained at all as a business, it is more opportunity constrained than cash constrained. With this in mind we are always looking for new opportunities for the business, particularly in line with our goal to take part in exploration drilling this year. We are quite confident about the prospects for Atlantic Petroleum in 2011.”