Located in the industrial port complex of Suape in Ipojuca, in the north east of Brazil and operating under the vision of being a landmark in the naval and offshore industries of the southern hemisphere, Atlantico Sul Shipyard (EAS) is a widely recognised specialist in modern vessel design.

The company’s 10,000-strong workforce has the capacity to manufacture all types of carrier vessels up to 500,000 deadweight tonnes (DWT), as well as semi-submersible offshore platforms, FPSOs, tension leg platforms and spar deep draft floating structures. “Our facilities invite clients to take advantage of the shipyard’s unique and privileged location in relation to global maritime carriage and the large deepwater oil and gas production fields,” says the EAS CEO, Angelo Bellelis.

Originally established in 2005 when the group’s Camargo Corrêa, Queiroz Galvão and PJMR Empreendimentos teamed up to form a business partnership in combination with the technological support of Samsung Heavy Industry (SHI), EAS has generations of experience to its name. In June 2008, the company boosted its brand to the global level with the entry of SHI in its business partnership.

Two years after its inception the shipyard began to take shape with the start of excavation works and even though completion of the plant was scheduled for the fourth quarter of 2009, the unit began its operations in July 2008. Indeed, the construction of Atlântico Sul Shipyard can be compared to an operation of war with 10,000 workers and 300 companies including contractors, suppliers and outsourced service providers being involved in the huge project implantation. In the same year as its completion the company rose to worldwide appreciation when its brand was boosted by the entry of Samsung as a shareholder. Having received over R$1.8 billion of investment, the shipyard is considered to be a distinct landmark in the revitalisation of the Brazilian shipbuilding industry.

With only two years of operation to its name and a distinct ambition to be one of the largest and most active yards in the world, EAS made its debut at the Rio Oil and Gas trade fair in September 2010. As one of the most important events for the local oil and gas industries, the company recognised the significance of maintaining a presence for future business and collaboration with industry partners. EAS decided to become the main sponsor of the Pavilion Pernambuco with the objective for this representation to act as a catalyst for business during the event, while other local companies and government representatives from the various towns surrounding the Saupe Complex also supported the organisation. Endeavouring to strengthen its position and brand among its peers and customers alike, EAS welcomed three times the predicted number of visitors to the opening of the Pavilion and management were thrilled with the company’s involvement in such a prestigious event.

Ever since its creation, the shipyard’s operations have remained dedicated to the core values of people; appreciating and enhancing the skills and professional development of its staff, excellence in every project it undertakes, innovation for the construction of its future and ongoing success, ethics, social and environmental responsibility. Such credentials have helped the company to form positive long-term relationships with all of its core clients, which include the market leaders Petrobras and Transpetro. A commitment to serving its customers is a further key asset, placing priority on safety and quality, and striving to value its human and technological capital by applying the best practices of social and environmental responsibility, aiming at increasing the wealth of its shareholders along with building prosperity with sustainable development for all those involved in its activities. 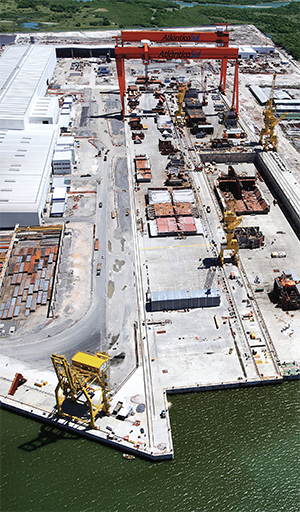 Indeed, the organisation has received numerous awards for social responsibility, employee training and environmental appreciation since its inception only five years ago. In July 2010 the social responsibility programmes of Atlântico Sul Shipyard became the highlight of the seminar on ‘Economic Growth and Social Justice’ held in Rio de Janeiro and promoted by the newspaper O Monitor Mercantil. Taking place at the headquarters of the Brazilian Development Bank (BNDES), the event gathered together important partners such as EAS, Petrobras, Brazilian Union of Shipbuilding, Ship repair and Offshore Industries (Sinaval), The Institute for Applied Economic Research (IPEA), among many others. Gerson Beluci, administration and institutional relations director of Atlântico Sul Shipyard talked of the programmes of EAS, such as the Professional Qualification Programme through which over 3000 workers of the metropolitan region of Recife have been trained as shipbuilding workers. Many of these workers had none of the required qualifications before entering the programme. A further housing programme was also highlighted for its impressive promise to build over 1328 houses for employees of the company, totalling an investment of R$78 million.

This commitment to social-environmental sustainability is fast becoming recognised as a key selling point and mainstay of the shipyard’s operations, not only through its schemes of work but also through its active integrations policies. The company has teamed up with Ethos Institute for Business Social Responsibility, one of the most important organisations of its kind in Brazil. The Ethos Institute, founded in 1998 by a group of entrepreneurs and executives has an internationally recognised presence. As a result of its programmes and its pro-active policy Atlântico Sul Shipyard is beginning to stand out from competition through its increasing number of industry accolades. In September 2008, thanks to its Professional Qualification Programme, the company was granted an Honorable Mention in the field of education from the Regional Department in Pernambuco of Social Service for the Industry (Sesi).

Two months later it obtained a further recognition by winning the Human Being Prize, Paulo Freire 2008, granted by the Brazilian Society of Human Resources, Pernambuco Chapter (ABRH – PE). Two specific projects were selected for entrance in this prize, the first being the Birthplace of Talents initiative, which transformed an old municipal slaughterhouse into a model school and vocational teaching facility and the Eng° Francisco C. E. Vasconcelos Training Centre. The latter of these is the first technical school to be built by a private company in Pernambuco, covering a sheltered area of over 2700 square metres and boasting a production line similar to the lines of a manufacturing unit. The rest of the area is taken up with 32 welding boxes, tool shop, classroom, canteen, administration offices, locker rooms, warehousing and a kitchen. All of the state-of-the-art equipment is exactly the same as that in daily use in the shipyard and the facility acts as a training and professional qualification centre to all employees admitted into the operational area of the company. It is this dedication to the improvement of employees, social mobility of the local community and longevity of the industry that makes EAS a centre of excellence.

At present the Shipyard has the capability to process 160,000 tonnes of steel a year. The facility covers an area of 1.62 million square metres including a sheltered industrial area of 130,000 square metres and a 400-metre long, 73-metre wide dry dock with a depth of 12 metres. Two Goliath gantry cranes weighing 1500 tonnes each add to its capabilities, as do two 50-tonne and two 35-tonne cranes. The wharf area boasts a 730-metre long outfitting quay equipped with two 35-tonne cranes of its own, while a supplementary 680-metre long quay area is dedicated for use in the construction and repair of offshore platforms. It is this impressive scale that enables the plant to offer substantial reductions in building time, while placing it in the distinct group of fourth-generation shipyards, on a par with the Asian plants that stand at the forefront of today’s worldwide ship building industry.

With its aforementioned portfolio of products and services being one of the broadest in the industry, the shipyard is able to provide an entire range of tankers including VLCCs, Suezmax, Aframax Panamax, clear oil products, dark oil products and gas carriers. In addition, bulk carriers, container ships, cargo ships, chemical carriers, drilling ships and offshore installations are a distinct characterisation. The modern project department, manned by a team of highly skilled engineers widely experienced in the national and international markets, is devoted to the development and detailing of ship and platform layout and engineering. Utilising only the most up-to-date software and hardware tools affords a specialisation unrivalled anywhere in the region.

Whilst endeavouring to build up its repertoire of project references, customer associations and industrial partnerships, EAS is currently committed to transforming the social reality of Brazil, particularly in the northeast and Pernambuco. Not content with being one of the most modern facilities in the southern hemisphere with some of the broadest capabilities, the company has hopes to play a part in creating a more equitable society with citizens gaining access to the same education and employment opportunities. This ambition starts with the creation of 5000 direct and another 25,000 indirect jobs that will directly impact the labour market in the metropolitan area of Recife. Residents of deprived communities of the five municipalities in the vicinity of the Saupe Complex have already benefited from training opportunities and income through the 2800 direct jobs created in the first industrial stage of this huge venture. As only the start of what is yet to come, Atlântico Sul Shipyard is already well on the way to becoming a global example for ship building excellence and sustainability.