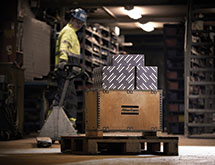 Post-World War II, Atlas Copco Mining and Rock Excavation Technique rose to prominence with the invention of one-man drill machines. Sixty years later, one worker can now operate multiple Atlas Copco machines from the comfort and safety of an office, a testament to the Swedish company’s continued innovation.

Atlas Copco got its start in 1873 manufacturing products for railways. Eventually, the company began making various instruments for the Swedish mining industry before creating global demand with the advent of its one-man drill machine. Now, Atlas Copco is the largest manufacturer and servicer of compressors in the industry. “There’s little in the world we don’t manufacture compressors for,” says Andrew Lyon, general manager for Atlas Copco Mining and Rock Excavation Technique, Canada.

In addition to compressors, the mining business area produces and provides services for most aspects of underground and surface mining equipment, including exploration rigs, surface/underground blast hole rigs, underground load and haul machines and drilling consumables such as drill bits and rods. Manufacturing is done primarily at Atlas Copco’s India, China, Sweden and U.S. plants, but the company stocks parts at its regional offices so it can more quickly service machines for customers. “We try to keep as much as financially viable in Canada,” Lyon says.

Globally Local
With direct sales and service locations in 90 countries – and a reach that touches 60 more countries – Atlas Copco has the largest footprint of any original equipment manufacturer in the mining supply industry. Its presence may be global, but having so many locations is part of Atlas Copco’s strategy to be seen as local to virtually any customer. Canada alone has 22 branches across the country, serving more than 300 active customers.

As part of its local focus, Atlas Copco’s mining business area in Canada prefers to work directly with its customers. “It gives us direct contact with our customer base, which builds that trust and the ability to build that relationship to overcome issues should they arise, or, more importantly, add value to the customer,” Lyon says.

Realizing that desire to be seen as a local company means working with local suppliers. Vendors play a key role in allowing Atlas Copco to serve its customers and the company takes care to treat those partners with respect. “It’s very important that we get loyal support from our local suppliers,” Lyon says.

Atlas Copco holds regular meetings with each of its suppliers to discuss issues and see where things can improve. Recently, the company has tackled logistics and supply chain problems to find more efficient ways to deliver parts and consumables to customers.

One change that has helped its supply chain was the opening 12 months ago of a new warehouse in Edmonton that services western Canada. Its main warehouse in the Greater Toronto area, serves the central and eastern portions of the country. The Edmonton facility consolidated warehouse operations and has improved the delivery performance of parts and consumables by 50 percent in terms of time, Lyon says.

With a global footprint, Atlas Copco wants to ensure each branch is providing a high level of service. The company has its own internal bible, called “The Way,” that contains all the standard procedures that must be followed at every level. The book covers a breadth of topics, including legal, operations, branding, communications and marketing. Beyond the written requirements, Atlas Copco has sought to standardize its facilities. All locations are ISO-9001, 14001 and 18001 triple certified, for quality, safety and the environment.

Still Innovating
By working with data and phone companies, Atlas Copco has developed technologies to improve cost performance and enable better communication between its staff and customers. Now, if a technician is on site servicing a machine he or she can fill out their location and time frame to instantaneously schedule the delivery of parts and required service without having to return to the local office. That allows the component to be potentially delivered while the technician is still with the customer, decreasing downtime.

A partnership with a cell phone supplier has made for safer trips to and from locations. All of Atlas Copco’s service, marketing and management vehicles are now equipped with distracted driving prevention devices, that inhibit drivers from sending or receiving emails and text messages while the vehicle is in motion. “I, as the general manager, and our management team want distraction removed from our vehicles,” Lyon explains. The precaution has received accolades from customers who appreciate the initiative to improve road safety.

Atlas Copco is matching those partner innovations with advancements in its own products. As after World War II, the company continues to develop the next leap forward for the mining industry. New machines allow for one person to operate a surface drilling rig without even needing to be on site. “[Customers] can work remotely between shift changes and remove the operator from any potential danger,” Lyon says. The next step is autonomous operation. Already, some drill rigs can operate fully autonomously, allowing for continual safe operation.

Atlas Copco’s focus on value and innovation doesn’t necessarily mean offering the most expensive product. The company strives to build machines and consumables with the lowest operating cost per hour or meter drilled, although the upfront price may in some instances be higher. “You buy quality, you get quality, performance and life out of the products,” Lyon says. “We are continually trying to demonstrate to our customers, that buying value – Atlas Copco – is an investment to get a return rather than going in and buying something cheap that won’t last or perform.”