The revolutionary device’s primary function is to explore and map the extent of hydrocarbon resources, by drilling and burying itself into the underground, carrying a full package of logging sensors. This method incurs substantially lower risk and cost, and is less complex than using an expensive drilling rig.

The tool penetrates the seabed and the underground using a mechanical drill bit, which is driven by an electrical motor to loosen and crush the formation ahead of the tool. The crushed formation is transported through the device and deposited in the void behind the tool while the excess volume is forced and injected into the formation through fractures generated by the Badger Explorer. The tool carries an electrical cable, which is spooled up inside the unit, connected to the surface and powers the electrical motors. The same cable is used for continuous transfer of data back to the surface.

Though it is still in the development stages, the Badger Explorer is set to revolutionise the field of exploratory drilling and mapping of additional resources in and around producing fields. The idea was first investigated in the late 1990s when the International Research Institute of Stavanger began looking at the practicalities of a remote drilling device. Having gained the support of oil companies, Badger Explorer ASA applied to the Norwegian Research Council to obtain money to start the project in 2003. By 2004 the company had received $1 million from the Research Council, which combined with investment from active participants such as Exxon Mobil, Shell and Statoil, reached a total funding of $4 million in Spring 2005. Research commenced immediately with the studying, engineering and building of prototypes to try and entice more companies to support the project. 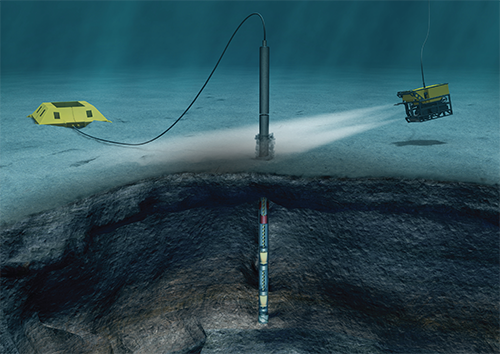 The prototypes and research gave encouraging results that raised the Explorer’s profile, resulting in a number of investors hearing about the concept and coming up with more money to aid its development. By the end of 2005 with nearly $15 million in the bank, the company was in a strong enough financial position to continue the project’s progress. The Norwegian patent was awarded in 2002, while the US application was granted in May 2006, opening up even more potential for the Explorer.

Recent progress with the device has met with some challenges, as president and CEO of Badger Explorer ASA, Kjell Erik Drevdal explains: “We recently performed a full-scale burial test with the prototype. Shortly after this winter came to Norway, which typically brings a period of much slower activity until the cold weather abates. However this last winter was extremely cold and we were very much affected by that – so much so that we had to take a break in the test. When we tried to start up again, we encountered some failures due to the cold, so we had to slow down the progress until the weather improved. Finally in March we resumed full testing on the site, and in April we were able to undertake the approval concept drilling, which means drilling the battery in a closed-in cavity and plugging over a certain time period. The purpose of this testing was to prove that the concept is viable and that all the different elements work together, so we are very pleased that the test has been successful.”

Since the Badger Explorer was first designed, the concept has naturally undergone a number of changes to its development, as improvements are implemented. Kjell explains how new innovations can benefit other parts of the business: “This type of technology development project will always generate new ideas and new ways of solving problems. In the process of researching new technologies and innovating, we have come up with technologies that can be used in other applications in other areas of the industry. We have produced a number of spinoff technologies that have improved other parts of the business. In addition to that we are improving the Badger Explorer all the time, from design to what kind of materials we are using. The basic concepts stands, but the choice of technology that we employ is constantly improving.”

One of the most important benefits of the Badger Explorer is the reduction of harmful effects to the environment, which can often be associated with this type of drilling work. Kjell elaborates: “With the Badger we can carry out all the necessary measurements while drilling down, ultimately using Badger as a drilling planning tool. At some point in a project we will need to bring in the rig and drill a physical hole to see how the reservoirs are producing, but then with all the physical parameters that Badger has measured, we know exactly the temperature profile, what the different formations are, what is contained in them and water pressure, and it’s much easier to plan a safe drilling operation as a result.”

Kjell continues to outline the benefits of an environmentally friendly drilling solution: “The world will need oil for a long time to come, so it is clear that we need to carry out more exploration, but we need to do it in a safer and more environmentally friendly way. That is exactly what we can offer with the Badger, and we can also offer our services at a cheaper rate and a faster pace, with more exact data. So customers really get three or more benefits in one drilling solution. Obviously there is a lot of interest out there in the Badger but our contract with Shell, Exxon Mobil and Statoil means that they are supporting us with funding, resources, logistics and vessels, and so of course, they have first right of refusal over our services, so they have the right to buy whatever we can produce. In that way the rest of the market is locked out, but if we can produce and provide more than those three companies can take then we are free to offer our services to whoever is interested and there are a lot of interested parties.”

For now though, Badger Explorer ASA is focusing on completing testing of the prototype model and moving into the next stage of the Badger’s development. Kjell explains: “The first effort now is to agree with our partners that we have reached the stage of conclusion with regards to the prototype project. We in Badger Explorer ASA have claimed that we have proven the concept, and that we now have reached a stage where we can define and build a pilot. Once that is agreed upon and completed we will begin the pilot testing within the next couple of years and if that is successful, we should be able to drill down into the ground several hundred metres.”