For around 50 years, Bahrain has enjoyed the benefits of relatively inexpensive domestic gas production from the Khuff formation. Khuff gas is used extensively for the generation of power and water, for industrial processes and for enhanced oil recovery. However, Khuff gas production is set to peak in the near future, while at the same time gas demand continues to rise. The development of supplementary domestic gas resources is being investigated, but these supplementary supplies have uncertainties in terms of timing and rate of delivery. As a result, the Bahrain LNG Import Terminal (the Terminal) is being developed adjacent to the Khalifa bin Salman Port (KBSP) facility, with the goal of providing additional security of supply of gas to Bahraini gas consumers.

“One of the key goals the project has set itself to achieve is to ensure the supply of natural gas during peak periods, thus complementing the existing energy infrastructure in Bahrain, and guaranteeing that no shortages will occur, as demand grows,” explains Terminal Project Director Tony Bingham. “This flexibility of the terminal will enable the Government to use it only when they need to bring in extra gas and we expect that it will come in particularly handy two or three years after it has started operating commercially, due to requirements growing gradually.”

Bahrain LNG WLL has been granted a 20-year concession to develop, build and operate the Terminal for the National Oil and Gas Authority of Bahrain (NOGA) and the facility is designed for 40 years of continuous natural gas delivery operations. The shareholders of Bahrain LNG are nogaholding (30 per cent), Teekay LNG Partners (30 per cent), Gulf Investment Corporation (24 per cent) and Samsung C&T (16 per cent).

A spokesman from Bahrain LNG gave some more details about the facilities. “The Terminal consists of an offshore facility with floating storage and includes a regasification unit mounted on a regasification platform adjacent to the floating storage jetty. The Terminal also has an onshore facility, which includes nitrogen ballasting, pressure control and measurement. The LNG storage capacity is 173,400m3 and gas produced in the Terminal will be supplied into the Bahraini gas distribution network.”

He continued: “The terminal contains facilities for berthing and unloading LNG ships of between 125,000 and 266,000m3 capacity, storage of LNG in the floating storage unit (FSU) ‘Bahrain Spirit’ (unloading will be carried out on an across the jetty basis), LNG regasification (at a rate of up to 800 mmscfd) and injection of gas into the distribution network. The facilities have been designed to operate safely and reliably over a wide operating range to provide security of supply and flexibility. The configuration of the Terminal, including an offshore jetty with two berths and regasification facilities with a separate FSU, is rare but not unique and the main elements making up the facilities are tried and tested.”

The new-build FSU, Bahrain Spirit, owned by Teekay, was delivered in the second half of 2018, and was briefly subcontracted and used to transport LNG in Asia. Once the Terminal is complete, LNG will be delivered via carrier ships, stored in the FSU and then turned back into natural gas using sea water to warm the LNG.

Tony gave some extra insight into this process and the engineering behind it: “Once the LNG is turned into natural gas, it will be transferred in a buried pipeline to shore. There is a facility onshore in which the nitrogen is injected into the regasified LNG supply to get it down to the right calorific value and then the resulting gas mixture is fed into the gas distribution network. In the 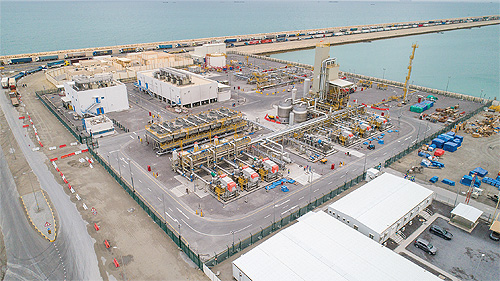 construction of the pipeline, we made extensive use of a method called horizontal directional drilling (HDD), which allowed us to run the pipeline up to 28 metres underground underneath the port causeway and for about 2.5 kilometres horizontally from the onshore receiving facility across the inner port area from where it runs to the Hidd metering station where it is tied to the existing gas network. By employing this practice, we were able to complete the pipeline installation works in a shorter time frame without the need for subsea trenching of the inner port or onshore trenching of the causeway, which would have impacted the only road between Bahrain and the Container Terminal – a busy vein between the Kingdom and the rest of the world.”

At the time of writing, the construction of the Bahrain LNG Import Terminal is 99 per cent complete, with 2018 being a year of intensive development that saw the project progress considerably. Alongside the delivery of the pipeline Tony has just discussed, a number of key milestones across the various facilities were also reached last year.

At the start of April, the dredging works were completed to ensure the required water depth was achieved at the jetty berths, in a turning circle for LNG ships, and in the access channel. Two months later, the final Accropode – a concrete block designed to resist the action of waves on breakwaters and coastal structures – was placed in the Terminal breakwater, helping to ensure the protection of the offshore facilities and the floating assets.

In parallel with the offshore activities, the majority of the civil works regarding the multitude of onshore buildings was completed. Following that was the arrival of sizable equipment to form the Nitrogen Production Facility (NPF) in April and since then, integration works have been in place to tie the equipment packages together.

During the second half of 2018, the Regasification Platform module sailed to Bahrain from its construction yard in Thailand. The module was rolled out onto a barge using heavy lift low loaders and then the barge itself was towed to a deep-water anchorage offshore Thailand and floated onto a heavy lift vessel ready for piggyback transportation to Bahrain. The vessel arrived in Bahrain in September and was installed on top of the offshore jacket structure that had been built in South Korea and delivered to Bahrain earlier in the year.

To cap it all off, the end of 2018 marked the successful delivery of the FSU’s first cargo, which was delivered to Japan with the FSU acting as an LNG ship. “When the Terminal is not in use, the FSU will be able to leave it and go trading,” Tony explains.

With much of the preparation and construction now complete, the next stage of the project is to finish pre-commissioning and to start to introduce LNG into the Terminal for gassing up and cooling down the facilities and to complete commissioning. The spokesman from NOGA noted that the LNG needed for commissioning and testing is being procured by NOGA in two parts, in line with Bahrain LNG’s indicated schedule. “This involves a part cargo, which has already been delivered on a FOB basis to the Bahrain Spirit, and which was intended to be used for gassing up and cooling down the terminal, and an ex-cargo ship for the remainder of commissioning and testing,” he stated.

He continued with some details on how significant the Terminal is to the wider Bahraini economy: “Natural gas is a very important energy resource in the Kingdom of Bahrain. Gas is used for power and water production, by industrial users and in oil production. The largest demand comes from the industrial sector with over 80 per cent of industrial gas demand being from three principal consumers: the ALBA aluminium smelter, the Bahrain Petroleum refinery and the Gulf Petrochemicals Company. The next largest sector is power and water production with the vast majority of power produced in Bahrain being produced using gas. Finally, gas is used in the oil production sector to assist the production of hydrocarbon liquids.

“The main effect of the completion of the terminal will be an enhancement of security of supply of gas, which will help to maintain Bahrain’s status as a reliable and secure place in which to live and from which to operate businesses. The Terminal will also provide local jobs both directly and indirectly through service providers.”

NOGA is also looking forward to being involved in the future expansion of the LNG market. “The supply of LNG is continuing to grow and there is still a lot of potential as demonstrated by the number of new LNG projects that are in various stages of planning,” the spokesman commented. “This growth in LNG supply, particularly from places such as Australia and the US, is facilitating more flexible trading terms, shorter contract periods, the entry of new participants and greater competition in the industry. As a future consumer of LNG, the Kingdom of Bahrain welcomes the further development of a global market in LNG and increasing competition in supply.

“Furthermore, we believe that a link to the Saudi Arabian gas network could provide the Terminal with additional exciting opportunities in the future, and we are supportive of the development of a GCC gas grid.”

With ambitious aims for the future of the Bahrain LNG Terminal project, NOGA is looking forward to the successful entry of the Terminal into its commercial operation phase. The focus is now fully directed at performing the required commissioning works and facilitating the transition into operations. Important scopes are to be executed to ensure that the terminal is safely commissioned and supplying energy to the Kingdom of Bahrain. 2019 promises to be an exciting year of development for the Bahrain LNG Import Terminal Project.