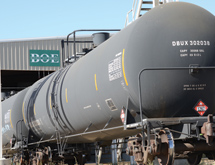 Started with a single customer loading on average 20,000 barrels per day of crude oil into railcars, the Bakken Oil Express rail hub in Dickinson, N.D., has continued its growth to its current size with five loops – two for loading, two for staging and a perimeter loop – and daily average loading of approximately 108,000 barrels daily. The hub can accommodate five unit trains at once.

Despite the sizable capital investment required to establish a rail hub, approximately one dozen such facilities compete with Bakken Oil Express, Managing Director Steve Magness estimates. “We’re probably the largest,” he declares. “We’re the only facility that loads two trains simultaneously. We built it to be very high volume and very efficient.”

A subsidiary of Lario Logistics, the Bakken Oil Express rail hub is an open-access, multiple shipper unit train-loading facility. “We have multiple customers at the facility, which is a little bit unique,” Magness maintains. “A few others do, but most have just one customer or just a few.”

The rail hub is in a unique location. “We’re pretty far away from most of our competitors,” Magness notes. “Most are up north of us. It’s an advantage for us that’s logical to us but may not be logical to them. We’re on a different rail leg of the BNSF Railroad than they are, so we have less congestion. The BNSF is a good partner.”

Pipeline to Truck
In October 2011, the Bakken Oil Express rail hub – which is located within the Three Forks shale oil play – accepted its first truck deliveries and was connected to the Four Bears/Belle Fourche regional pipeline system. In November 2011, the first train consisting of 103 oil tank cars containing approximately 70,000 barrels of oil was loaded and departed.

Each of the hub’s rail loops are approximately 8,000 feet long. Tank storage has been expanded from 215,000 barrels to 640,000 barrels in seven large tanks. The Bakken Oil Express rail hub never purchases the oil – it only stores the oil in its tanks until it can be loaded on a train and charges a fee for that service.

“We can fit in five days of loading in those tanks,” Magness calculates. The rail hub has 16 truck stations and is adding six additional truck stations in January 2014. The Bakken Oil Express rail hub also is building a second pipeline that is scheduled to be operational by April with the capability to transport 160,000 barrels of oil daily.

The current rail-loading capacity is 108,000 barrels of petroleum daily (BOPD), with a loading time of approximately 12 hours per train. Plans are in place that would allow for additional loops, tanks, rail-loading racks and pipeline connections, which could potentially expand the facility’s throughput to more than 210,000 BOPD. “We’ve never stopped building,” Magness concedes. “The tank crews that are out there built our first tanks and they just stayed onsite and kept building tanks.”

With 360 acres zoned industrial, the Bakken Oil Express rail hub is also equipped to handle unit trains for oil field service materials. The rail hub transloads frac sand and dry powdered cement for concrete from trains onto trucks. Currently, transloading is a small portion of the rail hub’s activities. “We see that growing,” Magness says. “That is one of the reasons we are building the industrial park next door.”

Rail Growth
Magness cites multiple advantages to shipping crude oil by rail rather than pipeline. “You can load a rail car and it gets to its destination in a matter of a few days,” Magness points out. Transportation of oil by train is faster than by pipeline because of the indirect route pipelines take through multiple pipeline systems to arrive at their destinations.

Rail allows owners to send their oil to a variety of destinations instead of only the terminal where the pipeline ends. It also allows them to get product to market faster or slower when its price fluctuates.

Additionally, mixing different types of oil in the same pipeline can reduce quality and necessitate product loss allowances, which is used to compensate owners for any product loss or quality downgrades to the oil. Oil companies also must make long-term commitments – sometimes up to 15 years – to a pipeline, whereas oil can be shipped by rail with three-year to five-year commitments.

“We feel like the need for this facility and crude by rail is increasing in North Dakota,” Magness says. “More and more companies are getting involved in crude by rail.”