Back to Profile Gallery > Bandak Group

A market leader in its home market of Norway, Bandak Group AS is a world-class provider of mechanical based engineering services, tubular products and services, and subsystems for the offshore oil and gas, maritime, and defence and space industries.

Encapsulating seven different companies, the oldest entity of the Bandak Group AS dates back to 1861, and the newest was incorporated just this year.

This is ITM AS, which is a total tubular product and service provider to the major oil service and E&P companies. This sees the Bandak Group broadening its scope outside of the subsea market, which has long been a focus for it. This acquisition partly came about as a result of the Bandak Group’s own purchase byHerkules Capital Focus in 2010, a Norwegian private equity firm.

“Since we became a partner of Herkules we have really started to see strong growth through acquisitions and investments intoour existing companies,” elaborates Geir OlavRyntveit, senior vice president of businessdevelopment and project. “We’ve also beenable to bring together these different entitiesinto a more integrated structure. Each of the companies wouldn’t have had the size, resources or capital necessary to do this on their own so Herkules has really been instrumental in this consolidation.

“Likewise, as a result of that we feel we are in a stronger position to serve our customers,” he continues. “Part of the rationale was that customers typically want fewer suppliers that can provider a broader package of services. They also require partners that have the competency to handle more complex deliveries in terms of documentation and quality. Therefore becoming a bigger player has been important for the Group in being able to take on these types of projects.”

As a Group, Bandak has production facilities throughout the south and east region of Norway, as well as from Stavanger in the southto Alesund in the north along the west coast. Furthermore, it maintains a site in Kuala Lumpur, Malaysia. With skills in engineering,welding, machining, surface treatment, assembly and test, and servicing, the Bandak Group is a competent partner in executing demanding projects from concept to delivery. 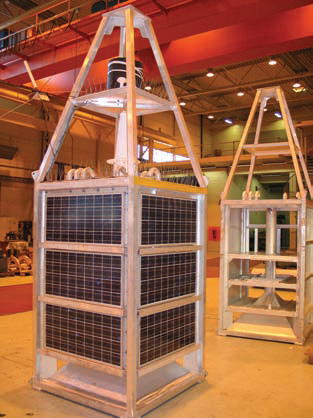 As to the current activities of the Group, Geirnotes: “We’re working on a lot of the differentmajor subsea developments taking place around the world. This includes projects in Brazil, in the Norwegian sector of the North Sea, in Africa aswell as Asia/Pacific. On the whole the marketlooks very promising, with good levels of order backlog, and we are undergoing discussions with several customers on a strategic level to be able to provide them with the capacity they foresee they will need for the next few years.”

He continues: “As an industry we face general challenges around the availability of resources and of qualified workers, particularly in the subsea sector. There’s also a need to improve project execution, on-time deliveries, and cost efficiencies, which is an issue for the whole industry, and we are part of that.”

There is also a desire to take the competence that the company has built up in subsea production, and transfer that into the maintenance, service, and aftermarket segment, as opposed to the new build sector where Bandak mainly has operated so far. The acquisition of ITM and its three coastal bases in western Norway is an important step in achieving this, offering the Bandak Group a local presence for the service market and preparing it for further growth.

In terms of the longer-term future, Geir describes how the Bandak Group is following a number of different paths: “Firstly we want to become even better and stronger in what we do today, so our current activities in producing equipment and smaller subsystems for subsea developments. This is where we have a good position, especially for connectors and tie-in equipment.

“Secondly our aim is to become more exposed and recognised within the maintenance and aftersales market, and thirdly to explore opportunities we have developed from our position in Malaysia, which gives us great scope for the Asia Pacific market. In addition to this we have a lot of positive internal improvement programmes underway to streamline the group further, better integrate it, and to attract and build more competence. It’s very important to get the group to function as a group, rather than separate companies. Likewise these internal improvements are vital to achieve our strategic goals according to growth, but also secure the quality of what we do,” he concludes.