Back to Profile Gallery > BAPCO

Established in 1929, the Bahrain Petroleum Company (BAPCO) was the first to discover oil in the Arabian Peninsula in 1932 and began exporting in 1934

Refining began in 1936 and the company has since helped shape the modern Kingdom of Bahrain through its wealth and the development of Bahrain’s manpower, with many of the highly skilled personnel occupying senior positions in both private and government sectors.

The company boasts a 260,000 barrel per day refinery, storage facilities for over 14 million barrels, a marine terminal for its petroleum products and a marketing terminal. Approximately one-sixth of the crude refined in the Bahrain Refinery originates from the Bahrain Field, while the remainder comes from Saudi Arabia through pipelines extending 27 kilometres over land and a further 27 kilometres under the sea. Almost 90 per cent of the refined products, such as LPG, aviation jet fuel, gas oil, heavy lube distillate and fuel oil are exported into the international market.

Mahdi Hassan, maintenance general manager of BAPCO, elaborates on the exporting side of the business: “Our prime customers for crude oil and refined products are based in the Middle East, the Far East, India, South East Asia and Africa and through our JV with Neste and Nogaholding we export high quality Group III lube base oils. We also sell aviation fuel at the Bahrain International Airport through our affiliate, Bahrain Aviation Fuel Company (BAFCO), in which we are a 60 per cent share holder.” The company also provides the full requirements of natural gas to the power generating plants and other industries in Bahrain. 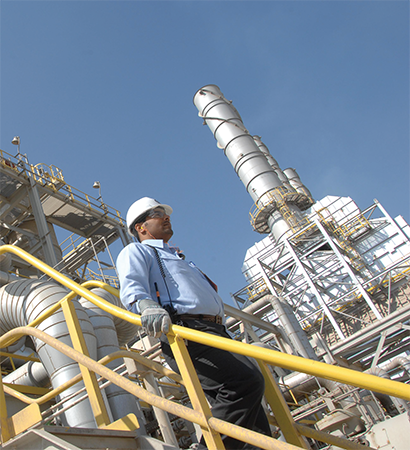 To remain innovative and competitive in an ever-changing market, BAPCO has completed its $725 million low sulphur diesel plant, allowing the company to export ultra low sulphur diesel to countries with stringent environmental standards. “Environmental protection plays a major part in our $1 billion investment programme, which includes the commissioning of the $151 million Refinery Gas Desulphurization Plant (RGDP), and air quality has been further improved,” says Mahdi. The company is also continuing with its strategic Bapco Modernization Program (BMP), which has the primary objective of improving competitiveness through selling high-quality value-added products and increasing the efficiency of the refinery in compliance with the most stringent international safety and environmental standards. The BMP is anticipated to raise the output of the refinery in the future.

To ensure the skills of its workforce match modern business and technological demands BAPCO has created an ambitious human resource development programme. Spread across different levels of pre-service and in-service training, the company gives employees new and old the opportunity to gain skills and qualifications. “Every year we provide a number of local and overseas scholarships to secondary school graduates in specializations related to the oil industry, which gives us the opportunity to contribute in the development of the young Bahraini generation and also prepare a new highly skilled workforce with rare specializations to join us,” enthuses Mahdi. “We also offer a number of management and leadership programmes to prepare individuals to take up higher managerial positions within the firm.”

BAPCO strives to retain its excellent reputation by continuing its compliance with the highest international safety and environmental and quality control standards. The company recently completed a successful major maintenance project that involved shutting down 12 process units and interrelated facilities; one of which was the Fluid Catalytic Cracking (FCC) Complex, one of BAPCO’s oldest units that consists of five separate, but linked, process units. “The planned Turnaround and Inspection (T&I) was completed in a record time of 33 days from oil out to oil in and there were no recordable injuries in nearly 700,000 man-hours of work,” highlights Mahdi. “That is a remarkable achievement considering the congested layout of the units and the hazardous nature of shutdown work. The success of this operation was made possible by the meticulous planning and enthusiastic efforts of both BAPCO and contractor safety officers.”

Following the recently completed maintenance programme, which also included the successful shut down of the fifth Crude Distillation Unit (5CDU) for a planned T&I, BAPCO is commencing with the planning and preparations for the biggest turnaround in its 80 years history. Scheduled for execution in the first quarter of 2014, the project will involve shutting down the Low Sulphur Fuel Oil (LSFO) complex, the fourth Crude Distillation Unit (4ACDU), BAPCO’s largest crude unit, and the fifth Vacuum Distillation Unit (5VDU), expected to consume in excess of one million man-hours. These shutdowns will involve more than 2,500 BAPCO and contractor personnel.

With exciting new initiatives, programmes and investments within the company, the future is looking positive for BAPCO, as Mahdi concludes: “More than 80 years after company’s establishment the adventure continues for us with new ambitions in exploration, new initiatives in oil and gas field development and new global markets opening up. Our main focus for the future is completing the BAPCO Modernization Program and also looking into the replacement of the current crude pipeline, which will have the potential to deliver 350 KBPD. We will also continue to retain excellent relationships with our customers both on a local and international scale.”