Back to Profile Gallery > Beluga Shipping

Founded in 1995, a time when many businesses were focused on container shipping, Beluga Shipping had a vision of what the project and heavy lift shipping markets could achieve.

This foresight proved well founded, as the market has grown enormously in the years since, and Beluga Shipping’s development has paralleled this success. The demand for project cargo shipments has been very strong in recent years and according to various reports is set to rise further in the future, particularly in the super heavy lift segment.

In response to this growth, Beluga Shipping has developed a new series of super heavy lift vessels. Speaking to European Oil and Gas towards the end of 2009, Niels Stolberg, CEO of Beluga Shipping, outlined his plans for the P-Series: “The business sector involving heavy goods and project loadings with individual weights of between 800 and 1400 tonnes, the so-called super heavy lift 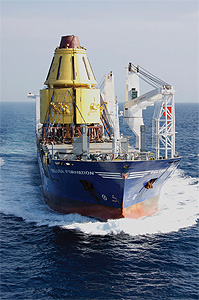 segment, is stable and accordingly represents an expansion-oriented, financially attractive sector. We are particularly aiming at this market with our new Beluga P-series, which can safely and flexibly ship super heavy lift modules. These are not nearly oversupplied in available tonnage, therefore the demand keeps up, and the charter rates remain solid and the order situation profitable.” For Niels, the entry into the super heavy lift domain is a logical development within the corporate strategy. The following adage applies as a general rule: The stability of the rate increases with the weight of the cargo – and the Beluga Shipping GmbH follows a clear strategy which focuses upon the super heavy lift sector.

The Beluga P-Series will consist of 16 state-of-the-art carriers, the first two of which has just completed her maiden voyage. The fleet will offer between 800 and 1400 tonnes of crane capacities, a deadweight capacity of 20,000 tonnes and an ice classification of Finnish-Swedish 1 A (German E3), all combined with a moderate fuel consumption. The cranes are not only quicker and stronger than those on current heavy lift vessels, but they are also equipped with additional loading tackle for smaller cargoes. In this way, two crane operators work together to guarantee the safe loading of valuable cargo.

The very first Beluga P-Series multipurpose project carrier, MV Beluga Houston has recently proved her capabilities by transporting several large reactors to shipyards in South East Asia on her maiden voyage. Shortly after the delivery in November 2009 from the equipping shipyard in Shanghai, the vessel headed for the port of Yokohama, Japan. There the special vessel loaded two reactors destined for Aratu in Brazil, each of them weighing 485 tonnes and measuring 21 metres in length. In the next port of Pyeong Taek, South Korea, another three reactors measuring 70 metres in length and weighing 300 tonnes each were loaded. In the Chinese port of Mailiao a further two heavy-lift modules completed the cargo, each weighing approximately 250 tonnes and spanning more than 40 metres. The successful maiden voyage of MV Beluga Houston demonstrated the kind of transport projects which can be performed with the P-type vessels in future. 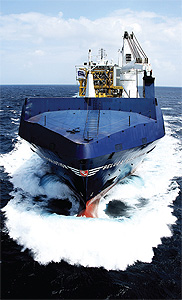 The newly constructed P-Series vessels are also equipped for voyages through polar latitudes, meaning they are able to traverse the route of the North East Passage along the Siberian coast. As a result, daily expenses and fuel consumption costs are reduced, as is the production of climate-damaging emissions. Aboard the P-Series vessels, new ballast water filtration systems are also in use, in order to avoid the so-called ‘marine invasion’ of small creatures and microorganisms into foreign habitats due to untreated ballast water. This also supports Beluga Shipping’s commitment to maintaining the ecological balance of the world’s oceans.

The shipping industry is dependent on reliable logistics partners that are capable of providing the appropriate special ships. For this reason, naval architects, design engineers and shipbuilders have developed, together with the fleet management of Beluga, a freighter type that offers this very constituency of customers a package of ‘all-in-one’ services. The Beluga P1 and P2-Series are optimally tailored to meet the demands of the super heavy lift market, which is a sector with enormous potential, particularly in the area of crane capacities of 800 tonnes and more. The oil and gas markets in the offshore sector can rely on financially strong investors. Even in the future the transportation sector can expect to benefit from the greatest challenges in the project and heavy lift areas. That is an important reason for Beluga Shipping to engage more than ever in this segment and to fulfil the increasing market demands by virtue of its new generation of multipurpose heavy lift project carriers.

For entrepreneur, Niels, this market strategy is a good and solid prerequisite for continuing the strategic expansion of his company. He comments: “It is vital that we load the heavy cargoes as safely as possible, and subsequently discharge them to the respective destinations, regardless of the extent of the existing harbour structure. Therefore, we have to be able to offer the international customer a variety of identically constructed ships that are each capable of being deployed according to the particular demands of each project. Given that our ships have a minimal draught, we are able to berth at nearly any quay around the world, an invaluable quality in the tramp shipping industry.”