Back to Profile Gallery > Benthic

In 2001 Professor Peter Davis from Sydney University in Australia conceptualised a seabed drill, and the attraction of local investors resulted in the production of a prototype system.

With support from operators such as Woodside, technical issues highlighted through the commercialisation of the system were steadily resolved and after five years of initial operation in Western Australia, Benthic expanded its horizons. Chief executive officer Stephen Pywell explains: “On award of more contracts, the decision was made to build PROD2. It came online in 2009 as a secondgeneration unit, and in 2012 Benthic introduced PROD3 to its fleet. All three operate throughout the world today.” 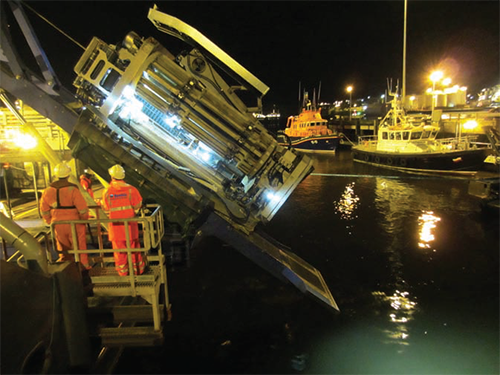 Operating in water depths down to 3000 metres, PROD can be deployed from DP anchor handlers, or PSV’s. “The system offers many commercial and technical advantages, especially in deepwater, where the fixed location on the seabed provides precise control over the drilling parameters without the effects of vessel motions, and allows multiple tools to be deployed in the same borehole, without the need to travel back to the surface for each tool change.”

Standard container packaging allows transport of the equipment by road or sea to anywhere in the world, and provides rapid mobilisation onto any suitable vessel. Stephen goes on: “Our main focus is deepwater geotechnical investigations with in-situ tools and coring equipment down to some 125 metres below the seabed in almost any geology from very soft sediment to rock. Although our main role is the acquisition of seabed data, we can also provide engineering support for such things as pipeline foundations and stability, driven and suction pile mooring systems, as well as general gravity foundations for subsea equipment.”

As oil and gas exploration continues, Benthic’s operations have expanded internationally, reaching the east and west coast of Africa, the North Sea, and even down to the Solomon Islands in the mining space. In 2012 the business relocated to Houston. Shedding light on the decision Stephen says: “Previously based in Sydney, we had restricted access to international markets; we had good knowledge on the local Australian market but were not engaged in Africa, the Gulf of Mexico, or South America, so with the move we were better able to build up an international network.

“Market conditions are solid and internationally there are many upcoming projects. We have interests in Mozambique and Tanzania, and Brazil has a portfolio of projects going forward. The Gulf of Mexico is making strong recovery now, post-Macondo, and operators are getting back into developing new projects, so 2014 is shaping up to be an active year.” With a new geographical advantage, Benthic is looking towards increasing its capabilities in the water. “We recently completed a project with Woodside in Australia and we are scheduled to commence work in Tanzania in 2014 at water depths close to 3000 metres, the deepest we have been so far. The drilling industry is already building and operating rigs with the capability to drill in 4000 metres water depth so it’s important for our next generation of machines to be ready for the demands of the market,” he highlights.

“In preparation, Benthic is already building a new generation of launch and recovery systems to cope with increasing depths and weather conditions, and is in final negotiation with a UK contractor for the build of PROD4, which is essentially the same as PRODs 2 and 3, although we are working on extending the water depth capability to 3500 metres. We are also in the engineering phase for PROD5, which will carry more tools and more pipe to significantly extend the capability to drill deeper into the seabed,” says Stephen. Benthic continues to focus on the development of an increasing range of new and enhanced in-situ and borehole tools to keep the PROD systems on the geotechnical ‘front line’.

Alongside the technology developments, Benthic invests heavily in the next generation of engineers, as Stephen details: “We have a graduate training programme in the company taking on six graduates across several disciplines. In 2014 we will take on a further six, both geo-sciences professionals and engineering professionals. Benthic is gearing itself up for long term oil and gas presence in major deepwater areas throughout the world and is well positioned to expand its capabilities and services as it goes forward.” Following the production of the new units, the business is considering the retirement and relocation of the original PROD1 to Houston as part of a new development and training centre, with courses running internally and externally to introduce seabed drilling to the wider industry.

Following activity in deepwater mineral mining off the Solomon Islands in 2012, Benthic sees a growing opportunity in that segment, where the PROD equipment can offer some distinct advantages over more conventional equipment in some of the most challenging environments around the world.

Looking beyond the forecast of a busy 2014Stephen addresses the future focus: “Ouroperational bases in Singapore and Houston provide good market coverage and we will continue to work towards further geographic expansion, expecting to go live in the Brazilian market in 2014, and continue exploring frontier locations in Africa and Asia.

“We plan to remain active across theentire range of the geoscience business,and are actively pursuing joint ventures or co-operation agreements with several specialist engineering companies in the industry, with a view to providing an increasing range of services to our customers.

“The long-term objective of the company is to increase our customer support throughconceptual engineering, interpretation anddesign services, and continue to expand ourgeotechnical core business through PRODsystems. We also see synergies with the deepwatergeophysical aspects of our projects andwant to become active in that field, primarilythrough autonomous underwater vehicles. Weare working towards making an entry into that market in 2015, which we believe that has lotsof potential.”