Within a few years Bergen Group has established itself as an international maritime industrial group with a main focus on the offshore industry and specialised vessels. But the solid experience within the Group has been gained through an extensive history going back all the way to the 1850’s.

Bergen Group, up to 2007 known as Bergen Yard Holdings, went from being a traditional ship building yard to include all segments of high technical developments within the offshore and ship building industry. This turned the company around from being a traditional ‘yard’ to becoming an offshore and technology based industrial group operating in both the national and international markets.

Today Bergen Group is a collection of companies specialising in services to the Norwegian Continental Shelf (NCS) offshore and vessel building industries. The Bergen Group includes several different companies beneath its banner, and Kristin Færøvik is CEO and head of the offshore division that includes Bergen Group Rosenberg and Bergen Group Hanøytangen amongst others. Though until now 2010 has been a relatively slow year for the company, business is beginning to pick up again with a new contract for Talisman’s Yme project.

Kristin explains what her sector of the Bergen Group is responsible for and the types of clients it engages with: “It includes EPCI contracts, major maintenance and modification contracts and fabrication. At Hanøytangen we carry out rig services and upgrades, and are looking to move into the decommissioning market segment. Until now we have worked with all of the major oil and rig companies, such as Statoil, ConocoPhillips, Transocean, BP and Talisman.”

Talisman is currently the operator for the Yme project, a previously abandoned oil field that is currently undergoing redevelopment. Dutchbased holding management SBM Offshore has been contracted to deliver a jack-up platform, and Bergen Group Offshore is co-operating to install the platform’s three legs alongside a number of lifeboat platforms. Talisman will then lease the platform back from SBM Offshore once the field becomes operational. “This is the first time an abandoned field has been re-opened on the Norwegian Continental Shelf, so from that perspective it is a very interesting project,” Kristin comments. 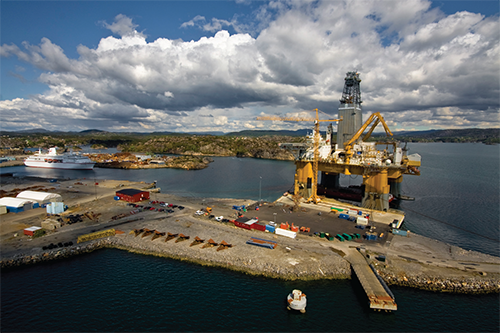 This project has come at a time when the supplier’s market has hit a lull. Although the major operators stopped investing and commissioning new projects in 2008, this took a while to filter through to contractors who were still engaged in projects started before the financial crisis. Bergen Group Offshore, however, has weathered through it successfully and, with tendering activity increasing, expects to see new projects starting up over the next few months.

Having had 25 years of experience in the industry, 18 of which were with BP and seven with Marathon Petroleum, Kristin’s recent appointment to the company will be a boost in this respect. The Norwegian oil industry is a relatively small community and with such a long presence, Kristin has developed an understanding of what clients want as well as a network of contacts and relationships that she brings to Bergen Group.

Nonetheless, she is quick to assert the importance of other employees: “They are a great team and very knowledgeable. Rosenberg has been in existence for more than 100 years so there’s a lot of experience in this organisation, with many people having spent their entire careers with the company. Although the company has changed owners a couple of times in the last decade, we have many people here in Rosenberg that worked on major projects. They maintain high standards in both the engineering and fabrication arms.”

Along with its experienced team, another strength of Bergen Group Offshore is the physical setup of its facilities. Unique within Norway, and perhaps throughout the world, the company has located its engineering and fabrication facilities next to each other. Kristin highlights the advantages of this: “The two departments can see each other and an engineer could put on a new coverall and walk straight through to the fabrication hall to see the items they have designed being built. This is excellent for risk mitigation when you’re working on projects that are heavy on both the engineering and fabrication sides.”

After tough recent months, future prospects for the company are beginning to pick up once more. The Yme project is progressing well, Bergen Group is seeing an increase in tendering activity and, with the Norwegian offshore industry returning to full steam, expects to capitalise on this regenerating industry. One emerging sector in which the company is taking an interest is decommissioning; with facilities at Hanøytangen already well equipped to handle such projects, this looks to be a market with potential.

Kristin concludes with confidence on the company’s future, seeing plenty of opportunity: “We certainly want to continue in the NCS EPCI market, and both the modifications and maintenance market have huge potential to grow. There is plenty of room for a company of our size and capabilities and it would be great to increase our market share.”