Back to Profile Gallery > Bhagwan Marine

Established in 1998 when it began operating with one single vessel, Australian firm Bhagwan Marine developed a strategy that focused on providing customers with exactly what they need through a positive ‘can do’ attitude, which resulted in a rapidly growing fleet and strong reputation.

Feeling fortunate to be a positive part of Australia’s maritime history over the last 13 years through its capable delivery of optimum solutions, the company took the strategic decision to create a new logo in 2013 that not only symbolised its desire for growth, but also its roots as a strong and forward thinking firm. The new design was that of a strong man, flexing his muscles and looking up and out to the future as he forges ahead through the bow wave. As the company continued to grow over the next two years, this logo has become increasingly synonymous with its focus on financial strength, a forward-thinking approach, reliability and superior service. 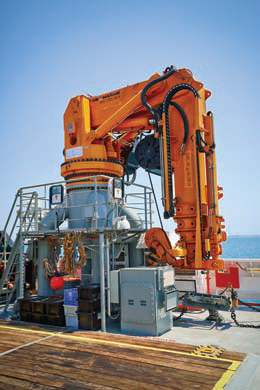 Not only does Bhagwan Marine boast an impressive number of vessels within its fleet, it also incorporates the very latest technology and safety features to every vessel that it delivers; a move that has proven highly successful against the challenges of operating at sea. Identified as the first Australian Marine Company to become certified for all three internationally recognised standards for quality (ISO 9001:2000), environmental management (ISO 14001:2004) and occupational health & safety (OHSAS 18001:2007) in April 2009, Bhagwan Marine has since maintained its focus on these areas of operation.

In fact, by continually looking for improvements in all areas of the business, the company remains at the forefront of innovation, design, certified vessel operation systems, health and safety procedures and quality assurance systems. On top of this, it focuses on leading the way in integrated management systems and the training of its personnel and crew, whether they operate offshore or on. This way of running a business has proven highly fruitful for Bhagwan Marine, as it doubled its profits from $13 million to $27 million and expanded its footprint over the last 12 months.

One of the key drivers of this major spike in growth was the company’s award of a long-term contract to supply a state-of-the-art dive spread for operations off the North West coast of WA. In line with this contract, Bhagwan Marine began the construction of a 56 metre DP2 hybrid catamaran DSV, which was given the title ‘Bhagwan Dryden’ and was completed in August 2014; operations began in November 2014.

February 2014 was a busy month for Bhagwan Marine, as it was also the time it chose to launch its free fleet app, BM LiveFleet for iOS and Android; the device allows anyone on a mobile device to view the company’s extensive fleet, read the specifications of vessels, examine schematics, look at photographs and track the location of each vessel in real time via a mapping interface. Initially released onto iTunes, the app was also made available on Android at Google Play and is a prime example of the firm’s commitment to delivering an increasingly efficient and improved means of sharing information. Furthermore, BM LiveFleet boasts Bhagwan Marine’s content management system, which saves on administration time, printing costs and eliminates inaccuracy across all mediums.

Meanwhile, the company’s fleet was further strengthened in September 2014 with the delivery of Bhagwan Dryden, a new-build dive support vessel collaboration. Arriving in Dampier, Western Australia, the state-of-theart 57 metre DP2 hybrid catamaran Bhagwan Dryden was supplied with permanent air diving, inspection and survey capabilities. She can work in shallow waters and is fitted with a TMS light work class Comanche ROV; she also boasts 260 m2 of clear deck space, a DP2 dynamic positioning system, a four point mooring system, firefighting capabilities, emergency hybrid capabilities and is fitted with a 21 tonne deck crane as well as a 20 tonne A frame. Based in Australia, she has been mainly operating on the North West Shelf and began a five-year contract, with the potential for a further three years, in October 2014. Under this contract, Neptune and Bhagwan Marine can market the vessel to third parties for chartering.

Following the arrival of Bhagwan Dryden, the company announced the acquisition of UK based firm Marine & Towage services (MTS) in October 2014, a move that has resulted in an immediate international presence for Bhagwan Marine, thanks to MTS’s offices and support facilities in Brixham and Falmouth. In addition to its two new offices, the company already boasts well-established Australian offices and support facilities in Geraldton, Dampier, Onslow and Exmouth (WA), Gove and Darwin (NT) and Brisbane and Gladstone (QLD). Furthermore, the company now boasts a fleet of 170 vessels and more than 850 personnel. With the new acquisition in place, Bhagwan Marine looks set to flourish as it takes on the expertise of towage, salvage and civil engineering provider MTS and merges these capabilities with its own operational strengths.