Back to Profile Gallery > BK Aalborg

BK Aalborg is a world leader in steam generators for large-scale concentrated solar power (CSP) plants. The company is based in Aalborg, Denmark, a city known worldwide for its long tradition of steam boiler development, and for which the name Aalborg has become synonymous.

Per Jørn Nielsen of BK Aalborg gives more details about the company: “BK Aalborg not only designs and delivers the steam producing equipment, but also follows the project from its inception to the final commissioning and handover. Projects vary from main component deliveries to complete turnkey installations including piping, instrumentation, mounting of valves and pumps as well as electrical and control systems, erection of steel structures and galleries and finally commissioning for both CSP plants and traditional steam boilers.”

He continues: “Our work within CSP is based on 25 years of experience with traditional steam boilers. We have adapted our knowledge and combined it with the innovative technology of solar power plants. We have delivered solar power boiler solutions for both saturated and superheated steam with capacities of 20MWe as well as steam generator systems for parabolic trough plants with capacities of 50MWe. At present, we have plants up to 250MWe on the drawing board. In addition to this, we are developing systems for molten salt as heat transfer media and for heat storage – the next generation of concentrated solar power.”

One of the new products developed by BK Aalborg is the CSP tower-module system, a scalable turnkey CSP sun-to-steam system, in the range of 250kWe – 10MWe. The height of the tower and the size of the solar field are customised according to need of output, geographical location and land available. The output from the CSP tower is steam, which can be used directly or in a variety of applications, and can be a stand-alone energy solution or be integrated in an existing facility. 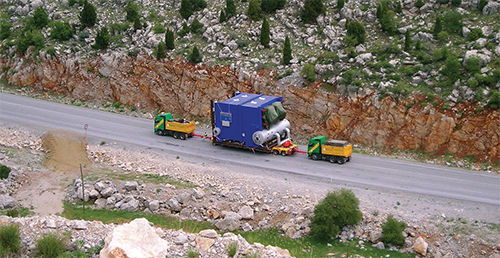 “We see the main users as factories or small communities who need steam. The steam can be used directly as process steam or to generate electricity, mechanical power, air conditioning or to produce drinking water. This solution could be an example of an energy solution for an oil refinery.”

Per noted that it was challenging to take the knowledge from steam boilers and make the move into solar power: “There is quite a difference, because in the traditional boiler market you have a burner that developed the energy, while in CSP we have the sun. At the beginning it was a challenge to convert this to make sure we got the right design, and we have put a lot of effort into this on the development side.” After some years working with CSP as the main product, BK Aalborg has decided to change the company name from BK Aalborg to Aalborg CSP. This name change will become effective on the 1st January 2011.

He continued: “We don’t have any production capability ourselves, so we do all the design work and then we contract out the manufacture. Of course we follow the production process ourselves and ensure our suppliers have only the highest quality assurances.”

A very recent project using BK Aalborg’s technology is currently underway in Spain. The project is supplying five times 50MWe steam-generating systems for concentrated solar powered parabolic trough plants. The total capacity is 1.5 times bigger than the offshore wind turbine plant, Hornsrev 1 in the North Sea or the capacity of 125 offshore wind turbines of 2MWe. Per explains: “We have now finished three of them and they are in commercial operation, and during next year we will finish the last two plants.”

Among other areas, BK Aalborg is also supplying evaporator units including steam drums, economisers, the piping gallery including valves, drain, headers, blow down tank, steel construction, and control system and is supervising the installation, commissioning, and legalisation of the plant.

Concentrated solar power is clearly a very important business area, and Per is keen for BK Aalborg to develop further in this area: “For the time being the countries that want to use ‘clean’ power are willing to pay a little bit more than what they have to pay if they use traditional boilers. So although it’s a little bit more expensive to use the solar power at the moment, for most of the countries, it is a ‘must do’ for the future, and that creates a driving effect for demand. Therefore I see we have a big opportunity to grow and to grow fast, and due to this enormous growth BK Aalborg is open for working in partnership with other companies. Looking at the market now and looking at what has evolved with concentrated solar power, I am happy to say that we have participated in the biggest part of it.”