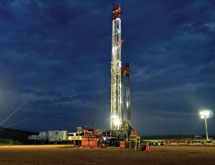 When Stuart Buckingham and his partners launched Black Hawk Energy Services in March 2010, they figured they would own and operate their three rigs in New Mexico and maintain its status as a small service company. “We started out and bought three used rigs and refurbished them with the intent of never growing any bigger than that,” says Buckingham, who serves as vice president and general manager.

However, when the market demanded more workover and repair services in conjunction with the oil and gas boom in shale plays throughout the United States, Black Hawk Energy found itself growing alongside the industry. Today, the company services 19 rigs, with eight in Texas’ Permian Basin and the rest scattered throughout Colorado, New Mexico and North Dakota. The company will commission its newest rig in fall 2012.

Black Hawk Energy Services offers 24-hour drill-out packages that include almost every piece of equipment associated with drill-out operations. This saves its clients time and money along with avoiding the inconveniences and costs associated with dealing with multiple vendors, the company says. Its rigs are capable of depths of up to 20,000 feet.

Although there is more demand for its services throughout the United States, Buckingham says Black Hawk Energy Services is biding its time before accepting additional work. However, Buckingham says the company is considering adding snubbing – which uses specialized equipment to insert pipe into high-pressure wells safely and efficiently – to its capabilities in the near future.

“We’ve expanded so quickly, right now we’re in a little bit of a wait-and-see mode,” Buckingham adds. “We’re looking at a lot of services to get into, including snubbing, and we want to be entrepreneurial and address customers’ requests for special equipment.

“We’re not actively seeking different opportunities, but we have a lot of people approach us constantly,” Buckingham adds. “We’ve expanded just about as much as our infrastructure corporately can stand.”

One-stop Shopping
Buckingham says its North Dakota customers appreciate Black Hawk Energy Services because its equipment is new and engineered to stand up to subarctic conditions, which means rigs will not have to shut down when winter arrives. It also helps that the company offers complete packages of equipment, allowing customers to work with a single source for their rig needs while dealing with a customer-centric workforce.

“Customers have embraced that and love it,” Buckingham says. “More than anything, though, we have really good employees that are the main contributors of our success.”

Although Black Hawk Energy Services employs quality and knowledgeable personnel, it simply does not have the staff necessary to take on additional work at the moment. Buckingham says a personnel shortage is a huge challenge for his company because competitors constantly lure employees away.

To maintain its staffing levels and recruit new talent, Black Hawk Energy Services has launched a number of initiatives. For instance, it says its compensation packages lead the industry to lure the best talent available and retain current employees.

The company also employs a safety staff and regular training courses to keep its employees out of harm’s way. Black Hawk Energy Services puts all employees through OSHA’s 10-hour safety training once they are hired. Field employees also must be trained to safely work with hydrogen sulfide, which is a material commonly used in the oilfield.