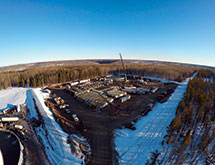 After succeeding in assembling a large contiguous block of land in the Montney Formation, Blackbird Energy is now moving to the next phase of its mission. The company has drilled two test wells on its 47 contiguous sections, now sitting at 65 contiguous sections, in the Elmworth area near Grande Prairie, Alberta.

“Our core asset is our Elmworth project,” says President and CEO, Garth Braun. “The project is focused on exploring, delineating and ultimately developing the Montney formation in Elmworth.”

The area is believed to be liquids-rich. “We have just completed drilling our first two wells,” Braun explains. The Montney area is approximately 200 meters thick, and one of the wells was drilled into the Upper Montney and the other was drilled into the Middle Montney. Test results have since been released and have confirmed the presence of liquids-rich gas in both the Upper and Middle Montney.

Blackbird Energy has been working on this project for the past two years. It was attracted to the region because of its history of production and cost-value. Elmworth is also close to services and major highways with year-round access available.

The biggest challenge for the Blackbird Energy team has been assembling the land. “We have been acquiring land cost effectively,” Braun states. Given that Blackbird was a small company when it began purchasing the mineral rights, it had to be strategic. Therefore, it selected its sections carefully, quietly assembling more than 44,000 contiguous acres.

Blackbird Energy then proceeded to license its first two drilling locations on its land, raise capital and drill its first two Elmworth Montney wells. “We completed the disposition of non-core assets for proceeds of $8.9 million in September, 2014, raised $37.4 million in October, 2014 through brokered and non-brokered private placements and raised a further $7.3 million of flow-through shares in December, 2014,” Braun says. This capital was needed to finance the drilling and completion operations. “It costs approximately $9.8 million to drill and complete each well,” he explains.

Low-Cost Play
Given the capital requirements, financing the Elmworth project is a business challenge, as is growing the land base. “We want to continue to grow our land base in area,” Braun says.

The success is a credit to Blackbird Energy’s team, Braun believes. “We have a highly motivated technical team, including the geologist and engineer who mapped the area extremely well,” he says. “We also have a very good drilling team.”

With depressed energy prices, only highly liquids-rich wells are of interest. This could well play for Blackbird Energy. As many plays are not feasible with low oil prices, projects with superior economics increase in demand. “In a low commodity price environment, you have to have the economics to make a play profitable at $45 oil,” Braun says. “We believe we have that play and that is important to us, and potentially to our competitors.”