Back to Profile Gallery > Blackwell Drilling 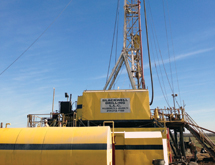 Blackwell Drilling’s operation is divided 90 percent into oilfield services and 10 percent into oil production, but owner Hal Ridlehuber plans to change that in the future. The company’s ultimate goal is to split the business 50/50 between oilfield services and internal oil production. With a few projects underway and more on the horizon, Blackwell Drilling is on its way to hitting that mark.

Blackwell Drilling provides drilling and oil rig services throughout Texas, New Mexico and Oklahoma to producers such as LCS and RHB. It’s also a minor player in oil production with three wells all in the Lone Star State – a 6,000-foot-deep well in Haskell, a 5,000-foot-deep well in Jones and a 3,800-foot-deep well also in Jones. Between the three wells, Blackwell Drilling is producing 120 barrels a day using conventional vertical drilling methods. However, the company is in talks to purchase an asset that will multiply its current production by nearly six times.

Worthy Investments
“We’re trying to close a 20,000-acre field development that’s producing 800 barrels a day,” Ridlehuber says. “It has 40 wells currently and has room for another 80 to 100 wells so we are going to develop it out. It will take $40 million to buy and $20 million to develop and will be worth a couple hundred million.”

Blackwell Drilling has already issued a letter of intent to purchase the property and is moving to the production-sharing agreement and funding stages. As a smaller company, Ridlehuber explains that it has had to face some larger players to win the property but it has been well worth it.

“It still has plenty of oil left in this field,” he says. “The bigger companies step over smaller deals. If it’s not a couple of hundred to 300 barrels a day, they pass it up. But with this field, we had to play against bigger companies to buy it and it looks like things are going our way.”

The project is a larger archetype of the assets Blackwell Drilling invests in. The young company, which formed in late 2010, goes after proven properties – low-risk, high-return oil production projects. In addition to this larger project, it is working to acquire a 400-acre property in Fisher County and a 1,500-acre property in Frockmartin County, both in Texas.

“We mainly focus on conventional vertical wells into known oilfields,” Ridlehuber says. “We’re going back into those older fields that the majors have abandoned but still have a lot left in them to drill.”

Although Blackwell Drilling has a specific project in mind when it comes to its own production, it has few limits when it comes to working on others’ projects. Whether it’s vertical or horizontal oil drilling and production, Blackwell Drilling has the equipment and staff to handle turnkey projects. On request, it will even go into those high-risk projects that it typically avoids.

“Right now I’m seeing a huge increase in activity in Cline Shale, which is in West Texas,” Ridlehuber says. “Companies are spending lots of money to develop it. Cline is risky: You can make 100 barrels in one well one day and move to another well and it’s zero. Our company is young and that’s not a good investment for us right now, but we will certainly drill there for others.”

Getting Equipped
The company has a steady stream of contracting work and has even had to turn down jobs. Ridlehuber says it is investing in acquiring more rigs to keep up with customers and continue growing its own production. The current economy still makes it difficult to get financing from banks or other lenders, but Blackwell Drilling has found success in working with private investors to purchase equipment. The company is considering acquiring another company that would add 10 rigs to its portfolio.

“We’d like to get up to 20 to 25 rigs running within the next four to five years,” Ridlehuber says.

“Some of these people have been with me since I started,” Ridlehuber says. “I have some great workers here and they are a major asset and help to me company-wise.”