The sky’s the limit

Based on the 40 years of aviation experience held within the Bond family, Bond Offshore Helicopters was formed as a private company in 2001.

Owned by Stephen and Peter Bond, its aim was to focus on the UK offshore helicopter support market. The company prides itself on providing excellent, efficient services to its clients, and as such was awarded, at the time, the largest ever offshore helicopter transport service contract, worth £120 million, in November 2002, to provide BP with all of its Aberdeen based helicopter support for the next ten years. The business has a fleet of modern Eurocopter Super Puma AS332L2, AS365N3 Dauphin and EC225 helicopters at its bases in Aberdeen, Blackpool and Norwich.

Ashley Roy, director of commercial Services, describes the organisation of the company: “Bond Offshore Helicopters is part of the Bond Aviation Group of companies, which also includes the operating companies Bond Air Services Ltd and Bond Air Services Ireland Ltd. The latter started a new contract on 1st January 2010 on behalf of Kinsale Energy (formerly Marathon Oil) in Cork, whilst the former is the largest operator of light helicopters in the UK, covering air ambulance, police, maritime and offshore wind farm helicopter support.”

Bond Offshore Helicopters re-entered the North Sea having left the market in 1999. Since its return in 2004 it has enjoyed considerable success with additional contract awards, with the resultant increase in its fleet of new technology aircraft and an increase in the workforce, which has risen from 50 in 2004 to 265 by mid 2010. Ashley elaborates on the expansion: “It’s been a controlled expansion in order to allow us to grow the business whilst maintaining the high level of service delivery to our existing customers. We’ve gone from a £20 million turnover in 2004 to £80 million+ in 2010, which is pleasing. However, competition is tight, although we feel that our level of customer support commitment combined with a strong service ethos, which added to the fact that we are UK-owned and based, makes us highly competitive.” 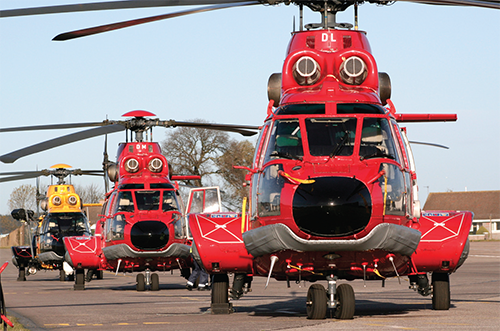 Ashley goes on to further highlight the company’s strengths: “We set our own high standards, and believe that the service starts with the customer. Our daily focus is on getting the aircraft airborne and delivering a high quality, cost effective, service solution. Hence our service ethos is very customer-focused, it’s driven into all of us, and the results speak for themselves.”

The company recently re-established itself in Blackpool, having had a long history in this region, as Ashley explains: “We started on 1st of January this year with two brand new AS365N3 aircraft flying on behalf of BHP Billiton & HRL. Having previously worked in the region we were able to utilise this experience coupled with the changes that the customer wished to see implemented. As such we have completed a full upgrade to the facilities at Blackpool heliport. We believe our responsibility is to provide a first class service, which begins the moment a passenger arrives at our terminal. Just like a scheduled aeroplane transport service, we must ensure that they are processed professionally and efficiently. We’re willing to invest in these practices for the long-term, taking on something that had seen better days and really turning it around, and as testimony to our focused effort on improvement, the customers in Blackpool have been extremely pleased with the result.”

Focus is now directed at the Norwich site, which Ashley explains will open on 1st June. “We’ve been in the southern North Sea before and are extremely proud to have been chosen by Perenco to provide its helicopter support in the region with two brand new AS365N3 helicopters. We hope that this contract award is merely the start of a new area of expansion”

Looking to the future, Ashley comments: “Whilst the recent recession has had an impact on everyone, Bond’s strength lies in being a private company and maintaining such a good relationship with our customers, suppliers and backers. With this support we have maintained our high levels of service delivery whilst continuing to expand. In the coming years the aim is to maintain the ethos of service delivery, continue our managed growth, and maintain the level of service that everyone expects from Bond.”