Back to Profile Gallery > Borr Drilling

Every so often, a person or organisation comes along, fundamentally changing the field in which they operate. For example, the charismatic Steve Jobs revolutionised computers with Apple, and while coffee chains existed before Starbucks, it is clear that they had a profound effect on café culture around the world. 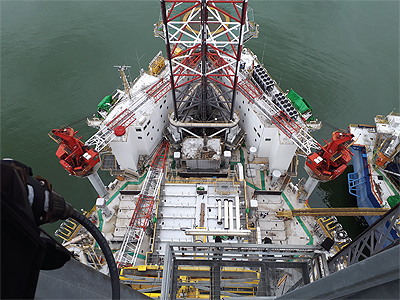 One company looking to do that in the gas and oil contract drilling world is Borr Drilling. While that may sound very bold, CEO Simon Johnson believes this very passionately: “This is a chance to deliver something that is significantly different to what has been seen before.”

Opportunity
Established in December 2016, Borr Drilling was founded by well known Norwegian entrepreneur Tor Olav Trøim. Tor previously was involved with (among others); the world’s largest oil tanker shipping company Frontline, bulk shippers Golden Ocean Group, drilling rig company Seadrill and oil services provider Archer Limited, before striking out on his own. He decided to re-enter the offshore drilling industry with his own vehicle Borr Drilling. Today, Borr Drilling owns and operates a growing fleet of jack-up rigs of modern and high-specification designs, which provide drilling services to the global exploration and production industry, in water depths of up to 400 feet.

Simon has a few theories on how Borr has been attracting attention in the drilling business, in what is, relatively, a very short space of time: “There are a number of factors. Modern rigs have been brought in from reliable shipyards built to the latest designs. A talented management team has been pulled together from a variety of companies, and we have developed a unique and differentiating relationship with the world’s most capable oilfield services company Schlumberger. Looking beyond that, we are promoting a new commercial model where Borr’s goals are aligned with those of its clients – an elusive outcome in offshore contract drilling.”

He believes that part of this is down to founder Tor’s resourceful spirit, spotting a chance that others might have missed: “In the drilling business you are typically dealing with institutions that have conservative histories and conservative mindsets. What he has is a proven ability to attract new investors, something that he has demonstrated in many other industries in the past. The most impressive thing is that he has been able to do this in the midst of the current industry downturn, accessing capital when many others are unable to.”

Input
Simon is very focused, and aware of what he has been brought in for: “I am part of a small core management team, with my experience mostly being in the marketing side of this sector. This is crucial when the market is improving, because securing the work is of paramount importance. When the decision was made to go in the current direction, mine was a natural profile for this role,” he confidently states. On the other hand, he is also realistic, adding: “As things develop and we enter a new phase of growth, there is every chance a manager with a different profile may assume the role, and that will reflect the maturing of the business. At Borr we are all working for the shareholder – not for management.”

While being able to sell something is crucial, there needs to be substance behind it as well. This is where Borr has been very busy, bringing in 13 rigs, with a further 13 to come by April 2020: “The overwhelming characteristic of the fleet is that it is the youngest currently operating in the offshore industry, and I don’t think any of our competitors can compete with Borr in that regard.”

Appropriately given the owner’s Nordic heritage, all of the rigs are named after Norse gods, including the Odin A1 self-elevating drilling unit. Built in 2013 by the Keppel FELS shipyard in Singapore, it can accommodate 150 people, has three Seatrax 7220HS cranes with a 50-foot radius, and is capable of working in depths of up to 350 feet. 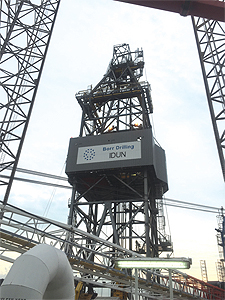 Another example is the Balder. Designed by Friede and Goldman in Houston, Texas and built in PPL Shipyard in Singapore, it was constructed in 2003. The jack-up can house 120 people, has a 17,920 cubic feet bulk material capacity, and can operate in up to 400 feet of water. As Simon says: “Most of the fleet, with the exception of four legacy units, were built in the last century, so they are perfect platforms for delivering challenging wells at the modern well-site.”

Contractual obligation
It is not just the machinery that is new when it comes to how Borr operates. A major way that the company is shaking things up is with the payment method after a job has been completed: “Traditionally you are remunerated for a job on a daily basis, which is basically a stipend for hiring an asset. What we are proposing is for the driller to be paid based on the service delivered. For example, if a project comes in at a lower cost, reduced time period or some other metric of efficiency, then there would be an additional opportunity for revenue connected with the service delivered,” Simon explains.

He is confident that the resources are there to ensure this commitment can be adhered to: “There is no structural debt of any substance,in terms of the balance sheet it is very clean.” Already, some big names are lining up to get involved: “We have two rigs employed under legacy contracts with Chevron in Thailand, and we are just commencing operations with Total in Nigeria and BWE in Gabon. It is a very exciting time for us in West Africa right now because this is the first example of Borr operating as a stand alone entity,” he announces.

Recently, 180,000 shares have been awarded to some key employees, something that he believes is a vital motivator, that can also have a unifying effect: “Everyone should be moving in the same direction. This is a way to align interests and maintain focus on the tasks ahead.”

Change
As well as expanding the remuneration models, Simon believes that in the long-term drilling has to change on a fundamental level, with a statement that is sure to raise a few eyebrows: “There are too many players at the moment. Ideally, what you want is a smaller community of competitors, not for collusion, but because it results in better operational practices and safety performance, and the ability for the industry to deliver effectively at a lower price through economies of scale and consistent investment through the business cycle.”

While he cannot give away too much, there is clearly a game plan with Borr that could have potentially world-changing consequences, and he sums it up perfectly: “It is very early in the life cycle of this enterprise. You are going to be hearing a lot more about Borr in terms of projects, customer engagement and how it is growing, challenging and disrupting!”