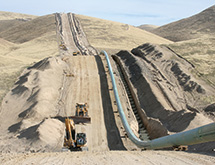 After swinging through the ups and downs of the energy industry in the past decade, new ownership is helping Bottom Line Services (BLS) transition to the stability of the midstream oil and gas market.

For the past 15 years, BLS has been an installation contractor and a provider of services to the pipeline and plant construction markets. BLS has three main divisions: pipelines, facilities and coating.

The San Antonio-based company’s services include amine gas and cryogenic plant construction, pipeline construction and facility construction are among its other offerings.

Oil and gas industry veteran Greg Blevins formed BLS in 2001. BLS started out as a consultant for the energy industry but eventually moved into overseeing construction projects. As BLS began to grow, Greg Blevins’s sister and brother-in-law, Lisa and Terry Jackson, joined the company in 2004 and were followed a year later by his brother, John Blevins, making it a truly family operated business. John Blevins’ first role in the company was to reach out to customers as part of BLS’s business development effort, and later oversaw construction management services. He is now vice president of BLS.

The company is headquartered in San Antonio but has a satellite operation in George West, Texas, and numerous smaller yards throughout the Lone Star State. Although it originally worked with large oil producers, BLS’s customers today are mainly midstream companies. The company recently completed a project near Albuquerque, N.M., and is working on others in Missouri, Oklahoma and Colorado.

Navigating Ups and Downs
When John Blevins joined the company in 2005 he was BLS’s 28th employee. Changes in the oil and gas market fueled rapid growth – and rapid contraction – in the following years. By 2008, BLS had risen to 300 employees, but the decline in investment and implosion of the construction market reduced the number of staff to 120 by 2009. The Eagle Ford Shale boom that followed in 2010 was another surge for the company. “From there, we put our primary focus into entering the exploration and production client base,” John Blevins says of how BLS tapped into the renewed Texas energy market.

In June 2011, BLS was sold to a newly formed midstream company, Howard Energy Partners. Howard Energy’s purchase provided BLS with the additional capital needed to take advantage of all the new activity in the Eagle Ford Shale and BLS again grew rapidly, reaching a workforce of 1,200 people by 2012.

By the end of 2012, Howard Energy sold BLS to MasTec, a national infrastructure contractor. Being a subsidiary of a larger company opened BLS up to new resources and the company has been moving away from its original mom-and-pop organization to a more corporate structure. “They [MasTec] have a lot of support well beyond our experience level,” John Blevins says.

Responding to Oil Market
Under MasTec’s guidance, BLS has shifted its attention to more strategic clients with a focus on fewer but larger projects. BLS is focused on midstream operators, Blevins explains. A midstream operator provides services to multiple energy producers and is therefore less tied to the success of any one company. Even when the oil and gas market is suffering, producers still need midstream operators to move product along the supply chain, making the company less susceptible to economic downturns.

Greg Blevins retired this past July and MasTec selected Brad Ramsey to succeed him as president of BLS. Ramsey has extensive experience in the midstream market and was chosen to help lead BLS in the transition to becoming a midstream service provider, John Blevins explains.

BLS is now involved in building central compression, stabilization and storage facilities for midstream customers. The nature of midstream operations means BLS is working on longer and larger projects. “We are being awarded larger projects,” Blevins says.

Building Relationships
Safety is a primary concern for every construction business, but at BLS safety is engrained in the company’s culture. “Our employees are dedicated and strive to work as safe as they possibly can,” Blevins says.

BLS is a key believer in standing by its employees’ judgment. “If there is any situation they deem unsafe or questionable they have full authority to stop the work until it has been mitigated 100 percent,” Blevins says. That authority came into play on a recent job where BLS was hired to repair thief hatches. Upon arriving at the project site, employees noticed there was a hazardous gas and decided to shut down equipment and personnel until the gas was mitigated.

The gas turned out to be hydrogen sulfide, a potentially fatal vapor. Fortunately, BLS’s management team had focused on the hazards of hydrogen sulfide and employees were able to identify and respond to the danger. “It starts at the top,” Blevins says. “Each one of the executives and managers is dedicated to safety.”

BLS has always been able to bounce back from dips in the oil and gas industry because of the company’s commitment to providing quality service. Blevins says everyone at BLS is accountable and if the company makes a mistake it is quick to own up to it and develop a solution. That attitude has allowed BLS is establish strong industry relationships and continue to find work even during lean periods.

Because BLS does not manufacture its own systems, the company must form similarly strong relationships with its suppliers to secure products. Blevins says BLS looks for strategic vendors who share the company’s focus on quality and safety. “When you perform those services that way it attracts the same like-minded partners,” he explains.

Those characteristics extend to BLS’s employees, too. When hiring, Blevins says BLS cares just as much about someone’s willingness and honesty as it does the person’s ability to perform the work. “Bottom Line doesn’t exist without the people we get to work with,” he adds. “They may not have the exact skill set that we need, but if they’re willing to try, it works out.”

BLS is counting on those employees to drive the company’s future as much as its new focus on midstream clients. Right now, BLS typically can handle a project of up to $60 million in value, but the company wants to expand its scope to $100 million and more. With investment support from MasTec, BLS is making good on that goal.

Blevins says the company will have the infrastructure and execution teams assembled by the first quarter of 2016 to handle a $100 million project. “We are strategically planning and developing our organization to handle large-scale capital projects,” he says. “Which will, in turn, be fewer in number of projects, but more employees per project.”