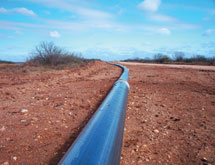 There are many companies that choose to follow the model set by others, but not Breakwater Energy Services. Unlike some of those firms, CEO Robert Bailey says, the company is quick to invent and or adopt new techniques, technology and equipment that enable it to more efficiently serve its customers.

“Breakwater’s laser focus is to find ways that it can save its clients’ money by understanding their customers’ short-term, mid-term and long-term plans and then value engineering custom solutions that are equally or more reliable than the current status quo in the industry,” he says.

This approach, in turn, has paid off for Breakwater Energy Services. “The customers that we’ve have had continue to give us more business, and continually seek our input on complicated situations,” he declares.

In August 2012, Bailey and Kinsel sold 40 percent of the company to Richard Kinsel, the father of Kyle Kinsel and the founder of Kinsel Industries, a Houston-based construction firm. Kinsel Industries has since been sold to Insituform but with Richard Kinsel’s infusion of capital and management team, Breakwater Energy Services has experienced tremendous growth and is quickly becoming a market leader in the oil and gas water transfer and management industry, Bailey says.

Additionally, Richard Kinsel has not come to the firm alone. “When choosing our financial partner, we had several strong financial offers from the private equity sector, some even stronger than our ultimate deal with Kinsel, but we saw the tremendous value of the Kinsel Industries management team,” Bailey says. “He brought his entire operational team.

“Kinsel and his management team have been together in the construction industry for over 35 years,” he says, noting that Kinsel Industries was the largest pipe-bursting company in the world and one of the leading micro tunneling and heavy civil contractors in the United States.

Savings in Services
Breakwater Energy has encountered competition in its market, but the company’s level of service has made it a leader, Bailey says. “Operationally, you can’t touch us,” he says.

“The firm’s passionate approach and ability to provide the highest level of service and integrity to our customers – coupled with our ability to think outside of the box and offer custom solutions for each customer – has allowed us to consistently save our customer’s money on a job-by-job basis,” Bailey continues. “But more importantly, we save our customers on downtime.”

For instance, on one $3 million project, Breakwater Energy was able to provide substantially better service quality and save its customer more than 30 percent, or $900,000, on that job. This was managed while maintaining a profit margin that is in line with the industry standard.

While some firms would build a pipeline made out of aluminum, Breakwater Energy went the opposite direction. “We went in and designed the job with single line [made of] polyethylene,” he says.

“The polyethylene line made sense because we knew upfront that the job would pump for over six months,” he explains.

Bailey adds that the polyethylene pipe also leaks less water and requires less labor, based on the way Breakwater Energy Services engineered the job. This proved to be beneficial over the project’s six-month schedule.

“We could have just easily said, ‘We’ll go out and do it the way everybody does it,’” Bailey says. “[But] we were able to go in there and save them 30 percent on that job.”

Adapting To The Oilfield
Before joining Breakwater Energy last year, Bailey was one of the top real estate brokers in Houston and a partner in a well-known commercial real estate development company. However, he chose to leave when he saw the opportunity to provide a higher level of service quality and transparency in the water transfer industry.

Switching from real estate to the water transfer business has not been easy, Bailey admits. “It was tough,” he says. “I haven’t had a vacation since we started a year-and-a-half ago.”

However, he is proud of how far the company has come, with additional financing from Richard Kinsel. “Now that our management infrastructure is in place, we’re hiring [more] pretty much as fast as we can to keep up with customer demand,” he says, noting that Breakwater Energy Services is adding service yards in Carrizo, Kennedy, Pecos and Madisonville, Texas.

Early on, Bailey and Kyle Kinsel realized that Richard Kinsel and his management team have been performing water transfer and management services for more than 35 years, using technology and equipment that will allow Breakwater to bring efficiencies to the oil and gas industry. According to Bailey, he and his partner saw the value in bringing that level of experience and expertise to the oilfield and knew it would dramatically accelerate their opportunity to be a leader in the industry.

However, Richard Kinsel saw Breakwater Energy Services as a medium for bringing more than 100 years of combined water transfer and management experience to a segment of the oilfield service business that is relatively young, but carries long-term potential. “The need for water transfer has exploded over the past couple of years based on the proliferation of shale oil and gas plays fueled by the need to take expensive and unsafe water trucks off the road,” Bailey says.

Although hydraulic fracking has been around since 1947, the modern fracking technique, called horizontal fracking, is responsible for making the extraction of shale gas economical. This was first used in 1998 in the Barnett Shale in Texas and recently entered the mainstream, Bailey says.

This freshness is “very meaningful to us based on our management team’s ability to bring sophisticated transfer techniques to a dynamic and fast-growing segment in the service industry,” Bailey asserts.

Bailey is also proud of the team that Breakwater Energy has assembled, in particular, COO and partner John McGillis, who has extensive experience in the water transfer industry. “He is very key,” Bailey says.

“As he was in the micro tunneling and pipe bursting industry, I think he’ll be one of the leading innovators and chief operating officers in the oil and gas water transfer and management industry one day very soon,” he continues.

McGillis, Bailey explains, was one of the early leaders in the micro tunneling industry in the United States during the mid-1990s.

“That was his brainchild,” Bailey explains, noting that McGillis used it to perform directional drilling from coast-to-coast in cities such as Houston, Honolulu and Miami.

Bailey also praises partner and board member Karl Kurz, who was the former COO of Anadarko Petroleum. “We are extremely fortunate and excited to have him so focused on Breakwater,” Bailey says. “He brings a lot to the table in terms of industry knowledge, guidance and relationships.”

Committed to Customers
Breakwater Energy has a full slate of work ahead, which will find it working from multiple service yards in the Permian Basin, Eagle Ford and Woodbine shale plays in the immediate future, Bailey says.

He also predicts continued growth for the company based on customer demands and the heavy operational and financial backing the company now has.

“We are moving in the direction to become a market leader,” he says. “Everyone on our team is committed to our customers’ water transfer and management needs.”

Bailey also has confidence in a new lay flat pipe that the firm will be using. “We are one of very few water transfer companies in the industry that have firm commitments from suppliers to sell us large quantities [of it],” he says. “We are buying all they can make.”