Going with the flow

“Though oil and gas activity levels are now picking up again nicely, it cannot be denied that the last three years have brought with them difficult business conditions for subsea flow assurance in the North Sea as a result of numerous delayed developments caused by the financial crisis and the consolidation of the major players in the industry.

Despite this, Bredero Shaw Norway’s (BSN’s) strong market position and its ability to provide flow assurance products and specialised coatings have enabled it to offset reduced activity in its home market by capturing several significant international projects in locations such as the Gulf of Mexico and West Africa,” states Snorre Lillesand, commercial and contracts manager of BSN.

Regarded as the leading player in flow assurance of subsea pipelines BSN, which operates out of Orkanger Norway, forms one essential piece of the 27 plants composing the Bredero Shaw network of strategically located pipe coating facilities around the globe. The Bredero Shaw group has offered first-class pipe coating solutions for eight decades and has coated more than 400,000 km of pipelines. At the heart of its operations Bredero Shaw offers a wide range of coating solutions, each with its own specific purpose. Its anti-corrosion coatings can be used under concrete and thermal insulation, while its protective and weight coatings offer security to pipeline areas where there is a risk of damage to pipelines in high-traffic sea corridors. Consisting of highly efficient thermal insulation systems with optimum thickness, Bredero Shaw’s flow assurance products offer unrivalled benefits for offshore insulation. 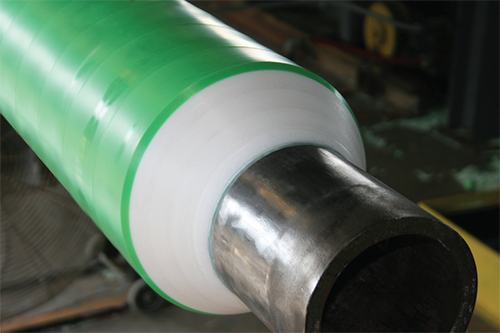 Access to this broad product range is just one of a number of unique capabilities BSN has at its disposition, as Snorre highlights: “Now, more than ever, one of the company’s strongest assets is its location. From its sites in Norway it is strategically placed to serve the rejuvenated North Sea region due to its proximity to the oil fields currently in development. Aside from possessing logistical advantages the company makes a dedicated effort to channel much of its resources back into its research and development system with a view to remaining the technological leader in the market. It also cannot be emphasised enough how much BSN benefits from having a highly experienced workforce, whose flawless operation, execution and ability to assist customers in overcoming their technical challenges has greatly contributed to the company’s present market position.”

In 2011 BSN achieved a milestone by completing the first project to utilise its new ULTRA product out of its Orkanger plant. ULTRA, a polystyrene based material, was applied on the Goliat Project with Technip for the Barents Sea. The success of this project comes in part as a result of the product’s improved thermal properties, its increased compressive strength and its enhanced reel-lay installation capabilities for use in Arctic environments. As of today BSN can also be found undertaking several major contracts with Subsea7, which are all expected to be completed by the end of the second quarter of 2012.

“Internationally, the Bredero Shaw group as a whole has experienced strong growth in the Asian and Pacific regions, driven mostly by countries including Malaysia, Indonesia and Australia,” Snorre explains. “In recent months Bredero Shaw has received its second contract from Chevron Australia to provide its coating solutions to the company’s Wheatstone project. A major portion of this contract involves work on the trunk and flow lines with some custom coating scope work included.

“This contract is at an early stage and a decision will be taken in due course as to whether BSN will carry out production of specific items in Norway or if it will be working with other Bredero Shaw subsidiaries to establish new local custom coating capabilities, including training of the local workforce and technology transfer. Either way BSN will retain a strong influence over the operation, something the company is very proud of and excited to be involved in.”

Being in such a strong position within the industry BSN is well aware that competing technologies and rival companies constitute one of the strongest challenges to its level of business: “Despite increased competition the fundamental necessity is for the company to continue to proactively emphasise the fact that it is a one-stop source of high quality service and superior products and promote its history of establishing long-term, mutually beneficial relationships with its customers,” Snorre says. “By providing the most reliable solutions, the most innovative products and by retaining an engaged, professional workforce, BSN will continue to set itself apart from its competitors and will remain its customers’ first choice when it comes to receiving optimum pipeline coatings and services.”