Brushing up the oil and gas industry

For over 130 years, BRUSH has been at the forefront of the power generation industry, manufacturing world-class turbogenerators, transformers, power management systems and switchgear.

Boasting manufacturing plants in the UK, the Netherlands, the US and the Czech Republic, the company has very much a global presence, with each plant having been designated as a centre of excellence for the design and manufacture of high voltage generators, excitation systems and motors.

“BRUSH has been operating successfully within the oil and gas market for over 40 years now,” states sales and marketing director, Richard Guest. “In this time the company has worked with all manner of businesses and organisations through to a number of the world’s oil majors including BP, Chevron and Shell. Selling its equipment through turbine OEMs, by 2011 BRUSH had established itself as the world leader in gas-turbine generators, as recognised by the McCoy database. Its transformer products have also penetrated the oil and gas markets around the globe.

“Larger than any other organisation of its type in the world when it comes to the supply of gas turbine generators and a major supplier to the oil and gas market, 98 per cent of the 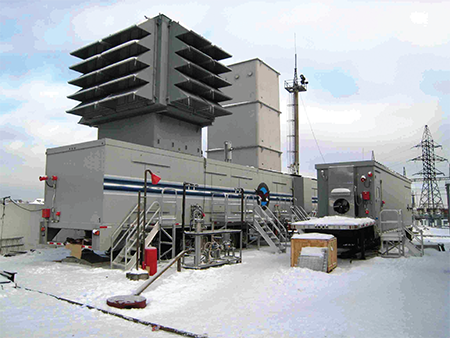 company’s generator business comes from exports, while its switchgear and transformer products hold a large segment of its domestic markets. With global oil and gas growth continuing to be driven by sustained high oil prices, BRUSH is now seeing significant demand coming from all corners of the world, especially from hotspots such as Brazil, West Africa and in the US, the latter since the discovery of significant shale gas reserves.”

The oil and gas market comes with its own very special requirements and where BRUSH differentiates itself from its competitors is the way it excels at being able to support its customers and meet their exact technical demands: “While many of BRUSH’s competitors are indeed very good at providing standard products, what BRUSH has come to be renowned for is being able to cope with complex engineered-product solutions, and being able to deliver them on time and to cost,” Richard continues. “With so many variables that can occur during an oil and gas project, these qualities are essential to the company’s customers.

“One of the other areas of the business that BRUSH is now investing heavily in is the growth of its aftermarket capabilities. At the heart of this is the company’s desire to have a full network of regional service and spare part centres, enabling it to provide superior customer service wherever the client is based.”

Wherever one looks, it is abundantly clear that BRUSH is fully committed to investing in its products, processes and its people, be it through its infrastructure, its research and development capabilities or its human resources. Investment in the latter can be witnessed first hand in the work carried out by the BRUSH Academy, a new facility developed to enable the company to deliver industry leading apprenticeship training as well as training products for its client base.

“The BRUSH Academy is focused both internally and also externally for its clients,” Richard highlights. “Internally the company has already taken on a large batch of apprentices in 2012, as well as a number of graduates, all of whom came through a very rigorous selection process. The Academy is a major tool that exists to provide not only world-class training to young apprentices, but also refresher or new training to those already working in the business. For our clients the Academy provides superior training facilities and a wide range of training products to assist them in maintenance and operation of our products.”

The recent expansion of its product range has seen it secure several major orders, one of which was announced in March 2012. This particular order involves the supply of ten DAX 87-520ERH (175MVA) generators to a world leading steam turbine manufacturer for a project in Saudi Arabia. In the face of heavy competition BRUSH secured this particular order, to be installed and commissioned in 2013, thus confirming its position as a leading supplier of purpose built two-pole turbogenerators for custom applications.

“Also from an oil and gas perspective BRUSH has recently won a contract to work with Mitsubishi to provide equipment to the world’s first fleet of FLNG carriers that are being delivered to the Shell Prelude project in the Browse Basin, offshore Australia,” Richard enthuses. “This represents a new business segment for BRUSH, however its excellent track record for undertaking technically challenging tasks and its proven ability to be reactive and respond quickly to changing customer needs makes it ideally placed to see the job through.”

With the energy needs of the world only increasing, Richard explains how BRUSH is planning to ensure its own continued prosperity: “Sticking to the strategy agreed with its owners two years ago, the company aims to move ahead with the completion of its world aftermarket footprint. BRUSH has already purchased and developed a generator repair facility in the US, and has opened up service centres in Japan and in South East Asia. The next step on the road to completing this global network will be to establish a greater presence in Brazil and China.

“Investing in people, production facilities, R&D and being market responsive are the core qualities that have been the foundation of the company’s success for well over 130 years, and will remain as such as BRUSH looks forward to years ahead.”