Back to Profile Gallery > Byelkamit LLP

With over three decades in operation and a strong history of robust design, Byelkamit has earned a respected reputation for delivering bespoke design and fabrication for clients operating within the oil and gas; petrochemical, nuclear; engineering; mining and metallurgical; energy and construction sectors. “We produce non-standard technological equipment in accordance with domestic and international standards,” explains Pavel Beklemishev, general director at Byelkamit.

The fabrication history of Byelkamit began in 1982 when the Gidomash factory was constructed and commissioned to manufacture ‘Squall’ and ‘Eagle’ torpedoes for the then Soviet Union. By 1995 the factory began reorientation for the manufacture of civil commodities and by 1996 the first batch of new products – namely cryogenic vessels for the storage of liquefied gases – were completed and exported to clients throughout Western Europe. In 1996 Byelkamit received the ASME (American Society of Mechanical Engineers) certificate for the first time and the right to put stamp U to pressure vessels. Till now Byelkamit regularly passes SME audits and increases its ability to put stamps U, U2, R and register it with the National Board. Later during September 2011 LLP Byelkamit, LLP Atyrau NefteMash (ANM) and First Montana Technology formed a single holding company named SGT Group, which presently employs around 1000 staff across three locations within Kazakhstan, Slovakia and the Czech Republic. All three factories certified by ASME.

Byelkamit itself employs 500 professionals, including 50 qualified and American Society of Mechanical Engineers (ASME certified) welders, as well as Level III and Level II inspectors for non-destructive testing. Furthermore 30 per cent of the company’s employees are university graduates, while three employees are qualified to PhD level. Its general fabrication area encompasses 11,7774 hectares, including 44,664 m2 of covered workshop space. These facilities are bolstered by Byelkamit’s membership of the wider SGT Group. SGT is able to utilise the strategically located manufacturing facilities of Byelkamit, Atyrau NefteMash and First Montana Technology to form joint ventures that allow it to remain flexible in providing complicated or large equipment orders as well as aftersales services.

Furthermore the group continuously seeks to expand its manufacturing capability. During 2015 the STG Group launched its expansion for large scale and heavy workshops at its ANM plant in Atyrau as well as Byelkamit, Almaty. The manufacture of the first new products to ASME out of the new ANM building is due to commence during June 2015, with signed contracts with Marubeni for the production of a large hopper for the Atyrau refinery reconstruction project. In all, the project will call for the delivery of around 40 units of equipment, including a hopper weighing more than 400 tonnes; two hoppers weighing over 200 tonnes; pressure vessels and various other units. 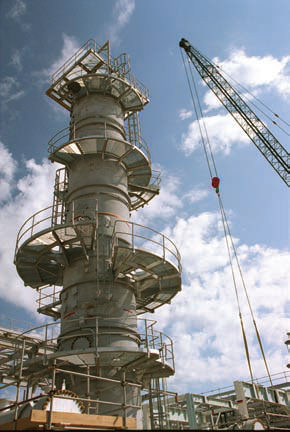 During 2014 Byelkamit enjoyed a positive year with the award of a contract for the modernisation of the Pavlodar refinery to increase production through new and bespoke equipment. The contract called specifically for the construction of three columns with a total weight of 556,000 kg. Furthermore during 2014 Byelkamit signed a contract for the Chinarevskoe oil field for the production of 23 vessels and four receivers, as well as a contract with KazStroyService for the production of 24 cyclone separators and 24 horizontal filter separators with a working pressure of 9,81 MPa for the Kazakhstan-China Gas Pipeline project.

Following its success during 2014, the STG Group has continued to progress positively with the award of further projects, which are undertaken collaboratively by each company within the group. In 2015 it will begin final assembly of bullets for LPG for a large oil field in western Kazakhstan, which will be pre-fabricated by Byelkamit, with the final assembly being undertaken at ANM in June, 2015. The STG Group has also been actively working on the development of flanges, which are created and registered in a joint venture with the Italian company Metalfar Continental called the FT Manufacturing Temirshi.Kz. The venture is already operational and completed with warehouse volume for several million dollars worth of flanges, fittings, gaskets, bolts, nuts and fittings.

A further highly publicised project for Byelkamit is its work on the ‘Future Growth Project’ (FGP) for Tengizchevroil (TCO). The STG Group is actively working with TCO to supply equipment for the current needs of the FGP and preparing to participate in projects for the reconstruction of the first set of factories built by the Soviet Union. This will call for the installation a three-roller machine by Boldrini for shells with a thickness of up to 235mm sheet; a machine for the manufacture of bevel for welding thick-walled vessels by Hugh Smith; automatic welding equipment with two welding heads by Lincoln; as well as several other pieces of equipment.

Despite the challenges of the oil and gas market at present Byelkamit and the wider STG Group are well placed to continue to grow through the combination of its broad client base and its high quality, bespoke fabrication and design solutions. “The market challenge for domestic producers in Kazakhstan is that international companies working within the oil and gas sector in the region do not believe in the possibilities of local producers,” Pavel concludes. “Our goal is to change their opinions and to prove that we can make heavy, complex and high-quality equipment in accordance with international standards. SGT Group occupies a leading position in the production of oil and gas equipment within Kazakhstan and Byelkamit represents a company that engages in engineering activities, production of new technologies and education of employees for the needs of the wider group.”