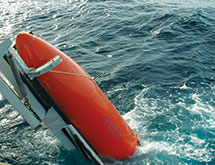 “We are a worldwide surveying company that specializes in deepwater surveying,” says David Connell, vice president and director of marketing. The company started in 1992 and works for all major and independent oil companies, including Shell, Exxon, BP, Chevron and ConocoPhillips in the Gulf of Mexico and around the world.

C & C Technologies garnered the spotlight when it discovered a sunken World War 2 German U-boat during a BP/Shell pipeline survey in 2001. It was the only German submarine sunk in the gulf, with all hands lost. In 2002, it also discovered the wreckage of the HMS Ark Royal in the Mediterranean Sea, in conjunction with a BBC investigation into great naval battles. The Ark Royal aircraft carrier became famous when its torpedo planes, along with other British warships, sank the German battleship The Bismarck. On Nov. 13, 1941, having transferred Hurricane aircraft fighter crews to the beleaguered island of Malta, the HMS Ark Royal was struck and sunk by a torpedo from the German submarine U-81 near the Straits of Gibraltar, where is was discovered by C & C more than 70 years later.

“This discovery would not have been possible without C & C Technologies’ deepwater surveying expertise,” Mike Rossiter, BBC film producer and director, said in 2002.

High Technology
C & C Technologies performs surveys with autonomous underwater vehicle (AUV) technology primarily for its clients in the oil and gas industry. AUVs are underwater robots, or drones, equipped for specific tasks. Approximately $8.5 million has been invested to develop each of the four AUVs owned and operated by C & C.

There can also be different acoustic systems in use near oil operations and AUVs transmit and receive a variety of sound frequencies. Sensor timing must be precise and the AUV missions must be planned perfectly to eliminate interference. AUVs are also operating at greater depths under high pressure. “Twenty years ago, working several hundred meters was considered deep,” Kleiner says. “Now we are routinely operating 2,000 to 3,000 meters deep. It’s all done remotely with autonomous vehicles.”

C & C Technologies was the first company to offer commercial AUV survey services to the offshore industry. To date, it has logged more than 55,000 hours of AUV surveys for 60 different clients in 14 different countries. C & C continues to advance AUV technology with the recent development and introduction of the C-Surveyor VI. The company explains that this unique AUV incorporates an innovative payload to deliver rapid, cost-effective and detailed inspections of pipelines, cables and other subsea infrastructure.