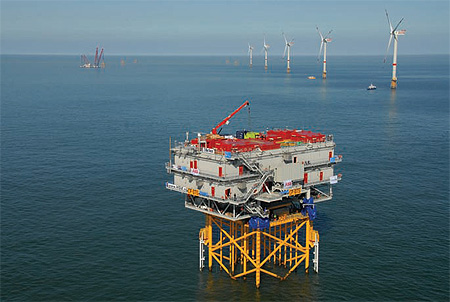 Following the successful implementation of the trial phase of the Thornton Bank wind farm, approval was granted for the development of phases 2 and 3 with construction commencing on November 25th 2010 and finishing during July 2013. Phase 2 and 3 consists of 48 6M Senvion turbines, with 24 turbines being deployed in each sub area. Furthermore in installation includes an offshore power station (OTS) as well as a second 150 kV export cable. The wind turbines in phases 2 and 3 are built on jacket foundations and are connected together and to the OTS via 33 kV cables. The turbines were provided by Senvion, which is also the company responsible for the operation and maintenance of the wind turbines during the first ten years of exploitation with the possible extension of a further ten years. The installation of the turbines was undertaken by the THV Seawind consortium (Deme & Fabricom), which was also in charge of balancing plants works including onshore works, construction and installation of foundations and the installation of cables. All of the cables used as well as the offshore transformer platform (OTS) were designed and supplied by ABB.

Key to the development of the Thornton Bank wind farm is the part it will play in enabling the reduction of CO2 emissions. Through the continued operation of the site, C-Power makes a very valuable contribution to both the European and Belgian environmental objectives concerning renewable energy and the reduction of the CO2 emission. C-Power contributes seven per cent of the renewable energy capacity needed for Belgium to meet its 2020 objective. Compared to the environmental impact of traditional energy sources, the environmental impact of wind power is very positive. Wind power consumes no fuel and emits no air pollution, neither does it generate any toxic waste nor does it constitute a major safety risk. Furthermore the energy consumed in the manufacture and transport of the materials used in the construction of wind facilities is equal to the new energy produced by the plant within only a few months. Through an expected yearly production of 1TWh, C-Power will avoid the release of 415,000 tonnes of CO2, which represents the annual CO2 absorption of a forested area of 65,000 and one third of the forest region within the Flemish region. “With our 325,2 MW offshore wind farm, we contribute to delivering a cleaner and safer environment to our children and grandchildren,” Jaak says.