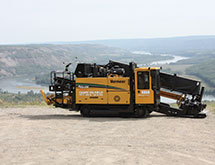 In the oil and gas industry, the words “horizontal directional drilling” are typically used to describe the method by which a resource is explored and produced. Although horizontal drilling methods are at the core of Cabre Oilfield Inc.’s operations, they are not engaged in the pursuit of the resource.

“Our work takes place after the wellhead,” says Graham Kosinsky, owner and president of the Fort St. John, British Columbia-based company. Founded in 1998, Cabre specializes in providing directional drilling services for the pipeline construction sector. Approximately 90 percent of its annual revenue is generated from new pipeline installations, with utility installations and existing pipeline replacements rounding out its portfolio.

Cabre specializes in horizontally drilling and installing pipelines under, around or through areas or obstructions that cannot be installed by trenching, including active roads and highways, fish-bearing creeks and rivers, existing pipeline corridors and environmentally sensitive areas. While the majority of its installations are completed between two to five meters below the surface, the equipment is capable of depths exceeding 30 meters and lengths of up to 1,000 meters.

In addition to its headquarters in Fort St. John, the company operates a branch office in Whitecourt, Alberta. Cabre’s service area runs from the foothills of the Rocky Mountains in North Eastern British Columbia east to the Fort MacMurray oilsands in northern Alberta.

In the past, the majority of work was completed during the winter months between December and March when the frozen ground allowed access to remote work areas. However, with the more recent focus towards the liquids-rich shale gas plays, oil companies have invested large sums of money into infrastructure and road development, which has resulted in more consistent year-round work. For example, Cabre recently worked on a $450,000 contract to install a 650-meter-long pipeline section under a creek north of Edson, Alberta. The project was completed in May.

Quality over Quantity
At the heart of the organization is Cabre’s management team and its employees. All new employees must go through an orientation process, which takes about three days to complete. Therefore, management invests a great deal of time in the prescreening process prior to hiring a new employee.

“My operations manager, Todd Alexander, promotes and supports the ‘team’ philosophy at Cabre. Our employees have bought into this philosophy. Our lead guys are willing to mentor less experienced workers, and move from one crew to another to assist if the need arises,” Kosinsky boasts. “It’s tough enough to keep experienced hands as it is, but to see one of your key guys going out of their way to mentor a new employee is proof that your system works.”

Cabre’s ongoing emphasis on employee safety and providing a quality product has given the operation an edge over its competition. The company has maintained a COR certified safety and quality program in both British Columbia and Alberta since 2004, and maintains memberships with several safety associations.

“Some oil companies such as Shell, Imperial Oil, Suncor and Transcanada, to name a few, have very high minimum standards of safety excellence that must be maintained to work on their jobsites,” Kosinsky says. “Only a select few contractors and service providers can work for these companies, and we are one of those.”

Maintaining this standard is often the reason that Cabre is awarded contracts or given an opportunity to bid projects.

“I don’t believe in having to buy work. If you have a competitive price and provide a better product, odds are that you will be in business for a while,” Kosinsky adds. “Besides, I’m too young to retire.”