Back to Profile Gallery > Cadre Proppants 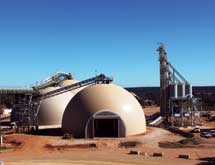 Innovation may be a daunting challenge for some companies, but innovative ideas often fuel an operation’s growth, and sometimes this profitable spark of creativity is not as complicated as some may imagine. In the case of Cadre Proppants, it hit on an ingenious idea just by doing what most other business do on a regular basis – trying to find a way to better serve its customers.

In December, Cadre Proppants opened the world’s first proppant-on-demand system (PoDS). Located at the company’s headquarters in Voca, Texas – which is the largest single-line proppant plant in the state – the service was designed to reduce costs associated with scheduling, transportation and storage of large volumes of proppant required by customers that perform hydraulic fracturing of oil and gas wells. With PoDS, Cadre can supply, within 24 hours, more than 20 million pounds of proppant directly from the plant to a well site anywhere in the Permian Basin or Eagle Ford Shale. The company’s system consists of 90 million pounds of on-site storage, seven loading bays – each with its own scale – 24/7 operations and a safe and efficient shipping process.

“The company was an idea that first came about in 2008,” President and CEO Jerry McGee explains. “We wanted to figure out how to make a quality product where the proppant would be applied. Transportation is a key component in servicing customers, so we wanted to be close to where the work is being done.”

Big Economic Impact
What Cadre soon realized after its operations were up and running was that it wasn’t enough just to supply high-quality proppant. Realizing all of the logistical components that were involved, the key was to get the correct amount of frac sand to the correct location, and Cadre estimated the market’s need for their plant as more than 1 billion pounds of sand a year.

“Proppant has such a greater impact economically for our customers than other applications of industrial sand,” McGee says. “We have a greater focus on quality through our computerized particle analysis and in-line process evaluation. Additionally, we are ensuring that we have the fastest, most reliable delivery mechanism with a best-in-class focus on safety for our personnel as well as the truckers who come to our site.”

At the same time, frac jobs keep getting bigger, so Cadre knew it needed to add to its storage capacity.

“Our PoDS is the largest in the world and it’s really a game-changer logistically,” McGee says. “It has attracted the customers it was designed for – those who need large volumes of quality proppant in a timely fashion. With the PoDS storage capacity and rapid delivery set up, we suit the needs of the customers, not the needs and timing of our operation.”

‘Comprehensive Technological Package’
McGee stresses that from Cadre Proppants’ founding, it has been structured to build on the newest equipment in the industry and to leverage the newest technologies. Its clients now have the opportunity to use FRACintel.com, which allows them to compare the completions of their wells with the completions of their competitors, and helps them to gauge the right formula of proppant for their situation.

“This site helps our customers get a unified fracture design,” McGee says. “It is ideally suited to give them the quality they need at the lowest landed cost. We also have SandCam and a proprietary customer portal, which allows our customers to see video of their sand processing and their trucks being loaded. It tells them how much has been picked up in what amounts and by whom.

“We have a very comprehensive technological package,” he adds. “We are proud of the number of customers and operators that are excelling in their individual industry because of what we’ve been able to do.”