Celebrating 25 years in operation during 2014, Caledonian Petroleum Services (CPS) has performed impressively since its inception, which has resulted in a strong reputation for the company as a leading supplier of support services for the offshore industry.

Able to deliver superior quality and experience when its comes to fabrication, project management and manpower services, the company’s capabilities have been further strengthened since it was acquired and became part of the Global Energy Group (GEG) in 2010. Today the CPS brand is able to offer complete turnkey solutions, from dimensional control, 3D laser scanning surveys, vessel design, integrity engineering and construction to its already established fabrication business.

CPS has further expanded its facilities through the acquisition of S&D Fabrication, in early 2014. “CPS has always been known as a premier fabrication company, ” explains business development manager, Raff Celentano. “However we have also created and developed the other services to deliver a truly seamless repair order execution service to support the asset integrity market.”

With unrivalled modern fabrication facilities located in Aberdeen (3 off) and Dunfermline, with all the facilities consisting of structural workshops, piping workshops (carbon steel and exotics) both internal and external secured storage facilities, means that CPS can deliver to the most demanding of schedules. 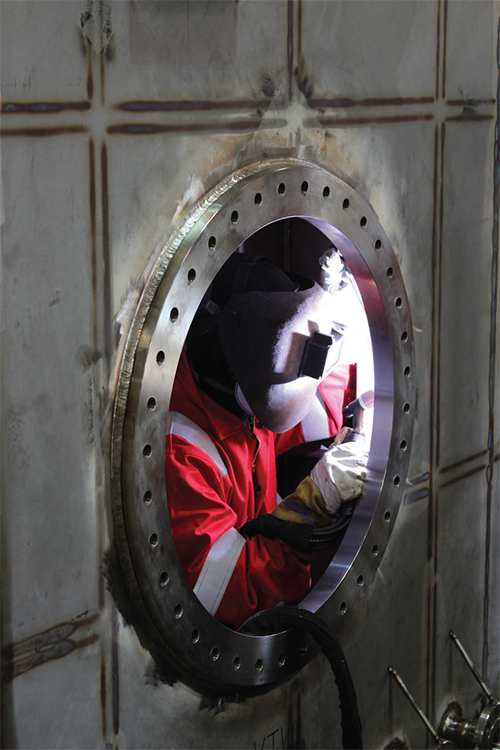 “From our point of view the company’s price point and cost structure has always been set in a market where we may have to compete against a number of competitors regularly for fabrication scopes,” he continues. “This means that even at a high oil price we are always proactive in addressing our cost-base and processes.”

In a competitive market, CPS has differentiated itself through the development of a niche service that targets, supports and delivers solutions for mature assets in a cost effective and efficient manner.

“CPS’s ‘vanilla’ integrity service, a plain, simple and no frills service, is aimed at the repair order market rather than large turnkey projects. The oil and gas market is presently all about maintaining asset platform integrity while maintaining safety standards. That is one of our strengths as we are in a prime position to support our clients in the low cost asset integrity market.

“A lot of companies are looking for cost reductions in the current climate, but we have always operated in a very competitive sector and have never been at the behest of oil price.”

As the UK offshore industry faces the challenge of supplying to the mature asset market at a lower cost, CPS has focused on meeting the needs of its clients through a more specialised approach, as Raff discussed with European Oil and Gas in August 2014: “CPS are the mechanics supporting our clients’ MOT rather than designing and building the car from scratch, which the larger EPC’s perform.

“It’s about doing what you need to do to maintain integrity safely. We provide focused construction driven practical solutions to the mature asset market and have added rope access construction personnel to enhance our offering.

In the current climate a number of operators are engaged with CPS to realise over 20-30 per cent cost savings not through cuts but working within the CPS model compared to the conventional models.”

People pioneers
Spear headed by Bob Steel, MD, the company’s impressive customer base and ongoing success, is its adherence to parent company GEG’s four core values, which ensures CPS continues to deliver an unrivalled service. These integral values include the building of 360 degree trust through the demonstration of care, transparency and fairness with all stakeholders; operating as a global team. CPS works with sister firms to deliver successful results, without compromising its own unique strengths; it also supports, develops and inspires personnel to develop and succeed on a personal and professional level while also delivering innovation, safety, quality and service to the best possible standard. A staunch supporter of innovation, the company believes the delivery of an unrivalled service stems from forward-thinking, in addition to a focus on health and wellbeing and a positive ‘can do’ attitude.

Indeed, as CPS has grown over the years, it has always ensured that it has the right resources. It has recently engaged with the Global Energy Group’s Graduate training scheme to complement its existing degree qualified personnel operating in its commercial, business development and welding service functions to support their already strong operations team. Bob Steel has always promoted investment in the technical skills of its staff with an apprenticeship scheme in place since its early days in operation, the people pioneering company has also developed a strong relationship with The Prince’s Trust, which resulted in its involvement in the ‘Get into Oil and Gas’ programme.

Bob has ensured that CPS regardless of the climate, invested in the training of people through its four-year apprenticeship scheme and has been involved with the Prince’s Trust for two and a half years, through its ‘Get into Oil and Gas’ programme. It has maintained a regular recruitment of five to six apprentices a year, though it incurs a cost it ensures the future requirement on the fabrication side is delivered.

As Raff elaborates: “If you look at the industry, it was only a year and a half ago the sector was lamenting about the shortage of manpower, whereas today many companies are making redundancies and reducing the workforce. To develop its other services, CPS, in partnership with Scottish Credit and Qualification Framework (SCQF) established an industry first with the CPS Academy; a notable development as it is the first and, so far, only company to have a training programme accredited by a university as a third-party partner. We have been in development of our Oil and Gas Survey Academy over the past year and a half and this supplements our survey offering,” Raff reveals. “This has been done in association with the SCQF – the body which manages Scotland’s national qualifications framework. This means that the qualification has a value that is transferable and is accredited by Aberdeen’s Robert Gordon University.”

The company’s progressive attitude towards training and career development has earned it a retention rate of 92 per cent amongst its staff, and the CPS Academy is an industry-defining first that is sure to influence the direction of offshore training in the future. This combined with its determined approach to efficient operation will differentiate CPS as a unique service provider for years to come, as Raff concludes: “CPS has over 80 per cent staff to contract ratio, so we don’t have the tool to cut contractor rates, instead we ensure that we operate efficiently to reduce costs rather than through cuts. The key for the CPS management is that we continue to invest in training as we don’t believe in a ‘boom and bust’ way of thinking, instead we continue to keep our costs competitive and take a long-term view.”