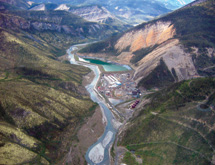 Nahanni National Park Reserve is home to mountain goats, woodland caribou, wolves, black bears and Canadian Zinc Corp.’s mine development Prairie Creek, an advanced-staged zinc, lead and silver property. The location of the mine, nestled in the first site in the world to be granted World Heritage status by UNESCO (United Nations Educational, Scientific and Cultural Organization), presents unique challenges for the mining company, but Canadian Zinc is pushing forward to meet and exceed all environmental requirements for this site.

Alan Taylor, Canadian Zinc’s COO, recounts the journey its company took to bring the project to fruition. “The environmental assessment, due to our location, has taken two-and-a-half years to complete,” he explains. “During the course of five years, from 2005 to 2010, we also lobbied with Canada’s park authority and the federal government to be recognized as a developer in the area.”

Going Further
Canadian Zinc wants to make sure the company does not have a negative impact in the national park’s environment, but it also wants to ensure people around the area can benefit from the mine’s operation. “Involving the communities is very important, particularly in Northern Canada,” Taylor says.

Canadian Zinc signed an IBA in January 2011 with the Nahanni Butte Dene Band, located 100 kilometres southeast of the mine and, later in the year, they signed another agreement with Liidli Kue First Nation of Fort Simpson. These agreements are expected to provide economic benefits and opportunities to residents in the area close to the Prairie Creek development.

Finding employees for the mine is not an easy task, with the nearest community located 100 kilometers away, and the mine location currently accessible only by air. Canadian Zinc partnered with the Canadian federal government to offer a training program for the local residents, so they will be able to take advantage of the employment generated by the mine. “We’ve entered into formal training programs that we’ve co-founded with the Canadian federal government to upgrade the qualifications of the regional workforce in anticipation of operations at Prairie Creek,” according to Taylor. The company also secured $3 million worth of funding from the federal government. The three-year instructional program, which is administered by Mine Training Society, is currently in its second year. The training is conducted in the communities where the possible future workforce resides and at the Prairie Creek’s site.

The Infrastructure
Once the mine is up and running, Taylor expects the mine to count on 100 to 120 workers on a weekly or tri-weekly shifts, where they work two weeks and have one off, or work three and rest two. The company has built on-site accommodations for 120 people. The rate of production Canadian Zinc is proposing for this mine is 1,300 tons per day.

Other infrastructure already in place includes a fully equipped administration and warehouse building, a 450,000-cubic-meter-capacity water storage pond and a 200-year storm-protective dike along the mine site. A mill is in its final phase of construction as well.

“We have a flotation mill that is 90 percent complete on site and that is going to be milling at a rate of 1,000 tons per day,” Taylor explains.

To move the materials out of the site, the company will refurbish the existing 180-kilometer access road used to bring all the equipment into Prairie Creek during the early 1980s. The road will enable the company to transport lead and zinc concentrates to British Columbia 500 kilometers away. Personnel will be transported to and from the site using an existing 1,000-meter airstrip.

Taylor expects production could start as soon as the winter of 2014, or by 2015, with the first shipment of concentrate to come in the first quarter of the following year. Taylor credits the company’s unique composition for making Prairie Creek a viable project in spite of its challenging location.

“Up until a merger we had earlier last year with Paragon Minerals, we were a single-project company,” Taylor says.

The merger with Paragon Minerals has added several new projects in the Newfoundland area for Canadian Zinc. South Tally Pond is in the exploration stage at the moment.