With the Caspian region today one of the world’s most integral sources of oil and gas production, COC has strategically opened offices in Aktau, Astrakhan, Ashgabad, Bautino and Turkmenbashi over the years to develop a presence close to the three giant offshore fields: Kashagan, Hazar and Filanovsky.

With some major North Caspian offshore oil and gas discoveries, the boom in activity has resulted in company revenue increasing 20 times since 2005 and reaching $130.50 million in 2013. “Today COC is made up of more than 600 people in total, with over 500 personnel operating as crew mariners. Our core activity is marine fleet operation and management services, which has been carried out in serving giant oil and gas discoveries since 2005. We offer a comprehensive portfolio of services, from technical operations, purchasing, maintenance, procurement, diving support and the provision of international standard offshore catering services,” explains Stanislav Belov, Aktau branch director at COC.

Following the acquisition of living quarter barges in 2004, the company delivered a fleet of six new build vessels, including five class 1B tugs and one fast crew boat in 2006-2007. These vessels were constructed at highly respected yards such as IHC, DeHoop Lobith and Damen in Holland. Later, in 2009, COC further expanded its fleet with an order to build three plus two 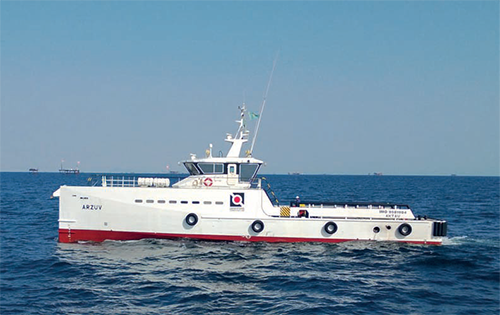 ice breaking tugs at STX’s shipyard in Braila, Romania, under Bureau Veritas classification regulations. Elaborating on the firm’s fleet, Stanislav states: “We decided to expand our activities and construct custom made boats, which we did with our fleet in Holland before our contract with STX. The design of our ice breaking tugs came from Finland based, globally-known ice-class vessel specialist Aker Arctic of Finland.”

He continues: “The majority of our fleet is in Kazakhstan, where under COC management we operate 21 vessels belonging to agip kco, the present operator of Kashagan Oilfield. This is our main project driver as it is where we started from; we deliver the whole cycle of operations for agip kco, but due to the downturn in Kashagan activity we are looking to expand our company throughout the Caspian Sea. The fleet under management includes, ice breaking tugboats, emergency evacuation vessels, floating hotels, crewboats, sewage waste management vessels, and barges. As the owner of leading accommodation vessels we can accommodate approximately 450 persons, however taking into account third party floatels the number would rise to around 870. We also use a local contractor for our offshore international standard catering services.”

Since its inception, the Kazakhstani firm has been aware than ongoing success relies on attracting and retaining high quality professionals. However, facing the challenge of being based in an area that is not centred on the marine industry, COC began the development and training of local people through its corporate crew nationalisation programme. “Because we are mainly operating in Kazakhstan, we are focused on developing the skills of locals rather than other nations. A nationalisation advisor who constantly reports to top management supervises the programme, which also involves the use of special marine software STORM’s Delta-Test. This software enables us to assess the knowledge of our personnel and view a track record of crew development,” says Stanislav.

Having obtained a license to perform onshore/offshore oil spill response (OSR) operation in October 2012, the company is building up its OSR capacity, starting with the acquisition of its Kazakhstan flagged ultra shallow draft oil spill and macrowaste collecting craft ‘Tungysh’. This small vessel is capable of cleaning 10,000 square metres of hydrocarbons film per hour, as well as collecting macrowaste. In addition COC has mobilised the fleet of aluminum ultra shallow landing crafts supplied with Lamor designed equipment to combat oil spills in shallow waters.

Furthermore, COC has a targeted delivery of two medium sized, twin-engine hovercrafts in mid 2014, which will also operate in the ultra shallow areas of the Caspian Sea. “We would like to use these vessels to patrol the pipelines, for crew changes, ecological inspections and surveying in ultra shallow locations,” says Stanislav. “As a company with a largely unconventional fleet we aim to develop into an offshore focused fleet with more platform supply vessels so we can continue to grow in the local offshore market and across the entire Caspian, including Azerbaijan and Turkmenistan. This development will also benefit us as members of IMCA.”

These plans will take COC into the next stages of expansion, as it looks to take advantage of its strong reputation in a competitive market. “It will be interesting to see how the company will grow over the next few years, as I see a lot of companies moving into Kazakhstan because of the oil and gas activities going on, but we have an advantage as a local firm. This is a great market if you enjoy the competition but ultimately the most critical priority for us is to operate with a focus on health, safety and environment.”