Caspian Offshore Construction LLP (COC) was established in Almaty, Kazakhstan during 2003 before finally commencing operations in 2005 following the purchase and complete overhaul and refurbishment of the Shkotov and Caspian Princess floating living quarters.

Today COC operates as a leading provider of marine fleet operation and management services in the North Caspian Sea as a 100 per cent private Kazakhstani entity, with offices in Aktau, Bautino, Astrakhan, Ashgabad, and Turkmenbashi.

The company continues to be headquartered in Almaty while from Aktau it manages a fleet of around 45 vessels, including 21 vessels belonging to NCOC – the present operator of Kashagan Oilfield, Kazakhstan. COC maintains its own fleet of 21 vessels including five shallow draft tugs of ice class 1B and five shallow draft icebreaking tugs of ice class 1A super as well as a stand alone fleet of five newly built oil spill response (OSR) ultra shallow crafts, which were built and delivered in 2012 following the company’s receipt of an OSR license during the same year.

European Oil and Gas magazine last profiled COC during March 2014 and since that time the company has continued to grow, while serving its clients within the North Caspian Sea. “Most of the company’s owned fleet is chartered for the present and following navigation seasons and in addition to several long term contracts, we have a couple of our tugs on the spot market with good potential for mid-term contracts subject to tenders’ award,” elaborates Aktau branch director, Stanislav Belov. 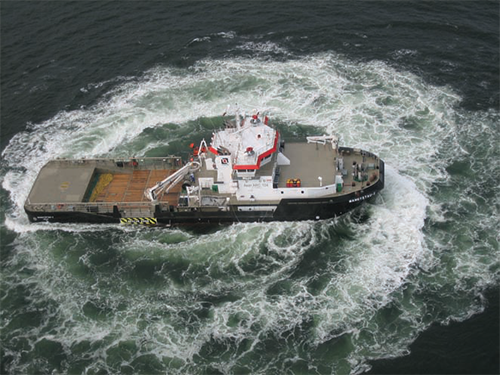 In addition to maintaining strong order books covering several navigation seasons, COC has further strengthened its business through targeted investment into its fleet as well as its operational offices. During 2014 COC began the construction of a new operating base in Bautino incorporating accommodation, canteen and workshop facilities with work expected to conclude in August 2015. Furthermore company took delivery of the multicat Kulan and survey vessel Kanysh Satpayev while modernising its Shkotov and Caspian Princess floating living quarters.

Within winter period 2013-2014 Shkotov and Caspian Princess were refitted to include a temporary refuge space to shelter personnel in case of a threat due to the release of hazardous gases associated with oil production. The refuge space on each vessel is capable of holding 270 personnel in case of an emergency. “The Shkotov and Caspian Princess fully comply with all safety requirements and can be used in areas where there is a threat of H2S gas release,” Stanislav says. “As part of the upgrade program both LQs were equipped with modern biological plants for the treatment of wastewater into domestic household water with a capacity of up to 50 m3 per day.”

The multicat Kulan was built by Damen in Holland and completed in April 2014. “The shallow draft multicat is a modern multipurpose support vessel with 51 tons deadweight, nine knots top speed and (1,2) meter maximum draft. It is equipped with a (2,9) ton crane, towing winch with maximum pull twenty tons on first layer, two Caterpillar C12 engines with a total power of 574 bkW (770 h.p), and has an ergonomic wheelhouse with 360 degrees overlook,” Stanislav explains. “This small manoeuvring vessel can render a wide range of exclusive services, including towing of barges, support of dredging operations as well as anchor handling operations for pipe layers and cable layers and other vessels in very shallow water areas.”

Later in September 2014 COC took delivery of the new-build survey rescue vessel Kanysh Satpayev, built by the Vard shipyard in Romania. “The vessel is designed to be capable of independent operation in the North Caspian Sea during open water season,” says Stanislav. “The ship is a survey vessel for very shallow waters and intended especially for marine, environmental and other sort of research activities. In addition, the ship is equipped with arrangements and equipment to reach the requirements needed to act as a stand-by rescue vessel for salvage and evacuation up to 20 people. The drive system is comprised of two main diesel engines with azimuth thrusters for propulsion and bow thruster for additional manoeuvrability.”

Towards the end of the year in November 2014, COC attended the 19th international Oil and Gas Turkmenistan (OGT) conference as part of its ‘Caspianisation’ strategy to solidify its presence in the Caspian region, as Stanlislav explains: “This event is of great importance for us and it should be mentioned that this is the second time we have had an official booth at OGT because in 2013 visitors could have noticed the COC flag waving amongst the other respected participants. Our long-term strategy covers not only our native Kazakhstan, but also Russia and Turkmenistan as well as our intention to have constant presence in Azerbaijan. All Caspian Sea littoral countries have centuries of lucrative and mutually beneficial interrelations and we would like to follow this tradition by providing offshore oil and gas companies with marine support services, widening the horizons of our relationship and friendship.”

Moving forward COC is dedicated to strengthening its position through its experienced, professional personnel and firm relationships with partners old and new, as Stanislav concludes: “One of the strengths of any company is its partners. Last year for instance we established exclusivity agreements with two reputable international companies: Griffon Hoverwork and Lamor Corporation and we hope that these relationships will be successful and beneficial not only for our companies, but also for the market.”