Back to Profile Gallery > Cathelco Ltd

Cathelco is a global leader in the design and manufacture of corrosion protection systems for a number of applications including offshore oil and gas.

Established more than 50 years ago, the last decade has seen oil and gas become increasingly important to the company, with the sector now comprising over 30 per cent of its production. Its earliest solutions were anti-fouling systems for pipe work but the product portfolio has expanded to include ICCP systems, reverse osmosis Seafresh desalinators, and a series of ballast water treatment (BWT) systems that are to be launched in 2013. 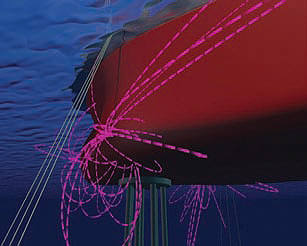 Cathelco’s new BWT system uses a combination filtration and UV technique to eliminate organisms. It was developed through a £4 million research programme that saw the establishment of a dedicated research facility in Kiel, Germany and onshore testing at the Royal Netherlands Institute for Sea Research (NIOZ). It is presently undergoing onboard testing on the MV Eddystone RO-RO vessel owned by Foreland Shipping, with IMO approval expected very soon. The BWT system has a number of features that make it stand out from its competitors. The effectiveness and power consumption of the UV lamps is optimised in all water conditions using UVT sensors. In addition, the water passing through the UV chambers travels in a ‘helix’ to maximise the exposure to the light. There is also a unique foam ball cleaning system to polish the quartz sleeves surrounding the lamps, thereby removing the risk of mechanical damage.

“The BWT system is a natural extension to the Cathelco product range,” says sales director Peter Smith. “It will be sold into the same markets as our existing products and will have the support of our long-established agent network.” With the IMO about to implement regulations on the control and management of ballast water, Cathelco’s state-of-the-art and widely supported solution will be ideal for tankers, LNG carriers, supply vessels, anchor handlers, and even drillships and semi-submersibles. It is expected to be commercially available second quarter 2013.

Cathelco’s existing range of ICCP and anti-fouling systems are widely used throughout the North Sea, Gulf of Mexico, the Middle East, and Brazil. However, one of the company’s most interesting and challenging markets is Russia, where particularly harsh environmental conditions have encouraged Cathelco to innovate once again – for example on cathodic protection systems for Lukoil platforms in the Caspian Sea.

The region experiences sea ice more than 150 days per year. Despite this Lukoil requires a riser platform, accommodation unit, and ice-resistant fixed platform used for drilling and well operations to have a design life of 35 years. Furthermore, the anodes need to be diver changeable, resistant to ice and easily integrated with the platform itself. Cathelco is meeting these challenges by creating high strength cofferdams and angled doubler plates to deflect ice from the recessed anodes whilst fabricating the anodes themselves from mixed metal oxide (MMO) to reduce wear.

The Lukoil contract is just one of many examples where Cathelco has taken market concerns and innovated a solution with excellent performance. In 2012 the company launched a new range of C-Max diver changeable ICCP anodes. Cathelco added Seafresh desalinators to its portfolio and immediately began a programme to modernise and enhance the product range. It has also delivered a 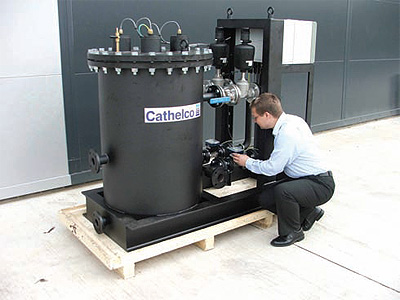 number of advanced control panel solutions to meet client demands for better performance and data recording. In each case the manufacturer has exceeded expectation and led the marketplace.

“In the offshore sector, the knowledge and experience of the design team is vitally important in developing systems that perform effectively and reliably,” says Peter. “This particularly applies to the ICCP systems for FPSOs and platforms that must provide corrosion protection for many years.”

In combination with Cathelco’s constantly evolving product range is the company’s commitment to a strengthening worldwide presence. Cathelco S.E.A., for example, was acquired in 1997 to serve South East Asia. From its offices in Singapore, the branch has gone on to provide products and services to clients in Malaysia, Indonesia, Vietnam, Thailand, and the Phillipines. “Many of the FPSO conversions and a considerable amount of platform construction take place in the Keppel, Sembcorp and Jurong yards and therefore it is vital to have a subsidiary in Singapore to provide on-the-spot sales and technical support,” says the sales director.

Much of the shipbuilding industry has suffered a downturn in business during the last few years, with the gross tonnage of new vessels in 2012 around 45 per cent lower than in the preceding two years. “However, this rate of decline is not reflected in the offshore oil and gas sector which remains strong, and we are confident that this will continue into the foreseeable future,” Peter states. In the immediate future, Cathelco has a number of developments to its product range in progress. It will be introducing a new range of Quantum control panels for ICCP systems, for example, which are smaller and lighter and contain bridge interconnectivity as standard. A pipe work anti-fouling version will facilitate greater electrical current per module to meet the larger flow rates.

Peter ends with an outlook on the next few years for Cathelco: “Over the next five years we aim to become the leading provider in the BWT system market. At the same time we will be endeavouring to maintain our position as the number one supplier of ICCP equipment and seawater pipe work anti-fouling systems.”