“It was in 1997 that myself and co-founding director Richard Faull first established Central Petroleum Limited,” explains managing director John Heugh. “Set up to examine large acreage positions across Central Australia, at a time when oil trading prices were low and competition less intense, Richard and I had the correct belief that prices would rise dramatically the coming years. 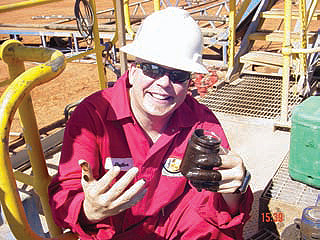 This belief was vindicated, with oil reaching more than $30 a barrel by 2004.

“By the time it was listed on the Australian Stock Exchange in 2006, the company had expanded its reach, with deals in place with several other companies to buy out its assets in the area, leaving it with the biggest onshore acreage package in Australia, covering approximately 70 million acres. This package of prospective acreage at 100 per cent level remains the biggest of its kind when it comes to holding continuous permits at 100 per cent across one focus area in the world, in a first world country. Such is its sheer size, this kind of acreage package is unlikely to ever be replicated ever again.”

The corporate goal at the heart of Central Petroleum Limited is to become the predominant producer of petroleum and related value added products in what holds promise of becoming one of the world’s most exciting energy hubs: “What the company wants to do is grow its production capacity both organically and by farming out large packages of land to a variety of international companies that can help sustain meaningful exploration programmes over a number of years,” John continues. “The short term strategy of the company is to focus firstly on oil as a cash flow source and then in the medium term, say three to five years, begin to monetize gas, condensate and helium prospects.

“The market for helium is particularly strong in India, China and South East Asia where the demand comes from electronic product industries. Furthermore the company has access to gas resources and around 20,000 square kilometers of mining permits over a giant Permian coal basin. There is no denying that Central Petroleum Limited has many assets and capabilities, however its major focus at present is the production of crude oil.”

When allowing the definition of unconventional resources to include not only shale gas, but also those found within tight sandstones and siltstones, Central Petroleum Limited possesses an enormous acreage potential found in the Amadeus and Southern Georgina basins, roughly equating to five billion barrels of oil and 43 trillion cubic feet of gas at P50 prospective recoverable resource level, according to independent reports. One example of the company’s recent efforts is the drilling of the Surprise well in the West of the Amadeus basin. By drilling a short horizontal 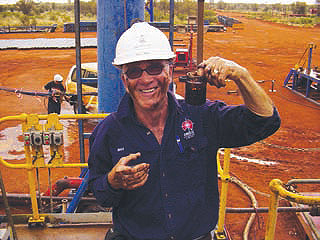 leg, the company has managed to increase production of flow to 400 barrels a day from what is relatively tight sandstone.

Over the next 12 months the business has mapped out a comprehensive exploration programme: “Amongst its numerous other targets and goals, the company is looking to go back and drill another horizontal well and conduct a 3D seismic survey over the ground that makes up the Surprise prospect, before a full blown field development. It also plans on carrying out the drilling of three further commitment wells in other areas,” John says. “In addition to these wells, Central Petroleum Limited continues to target resources in a variety of plays that it hopes to drill in the latter half of 2012.”

While it is home to a vast number of opportunities, the environment in which the company operates presents it with just as many challenges, which Central Petroleum Limited has had to adapt to handle. As John highlights, the ever changing climate of Central Australia is not the only issue the company has to face: “The logistical challenges of working in this region are quite serious. In terms of costs alone, getting a drilling rig into and out of Central Australia costs in the region of two to four million dollars. The other challenge is that much of the country’s existing rig fleet is old and poorly maintained. What the company hopes to see in the not-too-distant future is something of a revolution when it comes to the drilling rig situation in Australia. Central Petroleum Limited hopes to play a leading role in this movement, ultimately owning its own rig that allows it to drill to the required depths, wherever and whenever possible.”

Even with such a complex workload planned for the next year, Central Petroleum Limited has an even greater vision for the future: “All of us within the company would ideally like it to have conducted at least four or five major farm outs, through bigger companies, over the next several years,” John states. “In addition to this we would like to see a minimum of several hundred million dollars a year being spent on exploration, with the company producing a minimum of 10,000 barrels of oil per day, while also getting stuck into to some of the other gas condensate, helium prospects as well as coal for UCG, mining and GTLt development.

“One thing the company is able to take advantage of is the recent additions to Central Australia’s infrastructure. This work has seen the addition of a North-South railway link between Alice Springs and Port Darwin. For the first time in history this gives direct access from Central Australia to the coast of the Northern Territory, gateway to Asia with China only seven days sail away from Port Darwin. What the company will also benefit from is an existing low-capacity gas pipeline running from a part of its gas fields. Though low on capacity, this 50 metre wide route has gained approval from the Central Land Council, environmentalists and Aboriginal groups for additional expansion. This will represent an important piece of infrastructure that will help shape the future prosperity of the region, as well as playing an important role in helping Central Petroleum Limited become Australia’s leading independent petroleum producer.”