Back to Profile Gallery > Centrax

Although operating under the same umbrella, the activities of Centrax are split into two distinct branches – the manufacture of components for gas turbines, and construction of power generation generator sets. Based in Devon, UK, these operations have been honed over Centrax’ 65 years of service, including the sale of over 300 generator sets in that time.

These generator sets range in size from 4 Megawatts (MW) to 64 MW, and are based upon Rolls-Royce 501, RB211 and Trent 60 gas turbines, as well as Siemens 300 and 400 models. Each turbine is then packaged into a complete generator set, supplied, installed, and even maintained by Centrax.

Having worked exclusively with Rolls-Royce in the past, it was only earlier this year that Centrax formed a new agreement with Siemens to package two products in its range. General manager of sales and marketing Peter Ward, elaborates on the reasons behind this decision: “We recognised that there was a gap in our product range between the 5 and 30 MW Rolls-Royce turbines, which was filled quite nicely by ukthe Siemens 8 and 15 MW products. Signing the agreement with Siemens has given us a very complete and seamless range of power generation units, providing customers with a wide range of choice.”

Beyond its product range though, Peter also believes that Centrax has several other competitive advantages: “Because we are an independent company, we feel we are quite flexible, with a speed of response that some larger corporate companies cannot bring to the market. Centrax has a very high level of engineering knowledge, which coupled with our support infrastructure, gives us a lead over our competitors. Our standard 501 package has a very wide tolerance rate as it is suitable for use in ambient temperatures from -55 °C to +50 °C, and can withstand a range of environmental conditions. However, we can also engineer in any special requirements that the customer may need for their specific location or process.”

Historically Centrax’s core market has been in Europe, although the company has different areas of marketing for specific products. As such, whilst the 4 to 5 MW generator sets are sold worldwide, the new 8 and 15 MW Siemens models are only packaged for use in five European countries – UK, France, Italy, the Netherlands, and Belgium. The larger end of Centrax’s product range is also sold on a European basis, but in each case the company is supplying to the industrial power generation market. “In addition to Europe, our particular target markets for the 4 and 5 MW models are Russia and India. Over the last five years we have sold 29 turbines into Russia for use in the oil and gas industry, and have recently established a regional branch to focus on expanding this market,” adds Peter.

Earlier this year, Centrax announced a new joint venture with the Bahrain-based Arab Shipbuilding & Repair Yard (ASRY), in what is one of the biggest projects in the company’s recent history. Under the name ASRY-Centrax Ltd, this venture sets out to produce a floating self-contained power barge for multiple applications. Peter elaborates upon how such a concept came about: “Rolls-Royce is currently investigating the possibility of barge mounted power stations, and as part of that discussion we were introduced to ASRY. Initially we had intended to keep the businesses separate, with customers purchasing a barge from ASRY and then the generator sets from Centrax, but quickly we identified that the actual delivery was a critical aspect for this type of plant with orders placed with just one entity and so the joint venture was born.” 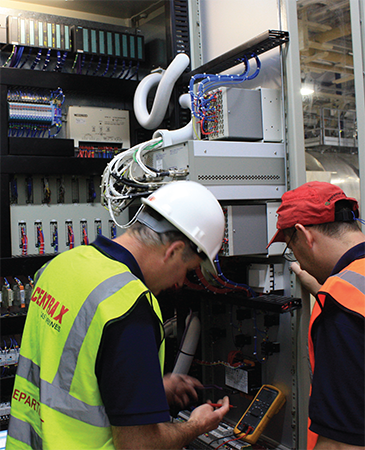 At the heart of the power barge are two Centrax packaged Rolls-Royce Trent 60 generator sets producing a total of 125 MW of power. This high power density, combined with the small footprint of the twin Trent 60 packages, enables the barge to be easily transported from the ASRY yard and positioned in ports, rivers and coastal areas with minimal on-shore support. The flexibility of these self-contained generator sets means two or more can be linked together, and even configured for the storage of liquid or LNG fuels. The units can either be connected to the local power grid, or operated as stand-alone plants, with the ability to run at 100 per cent power in just ten minutes from a cold start.

“The barges can be shipped throughout the world and used to supply power during the construction of new land-based coastal power stations, as well as during outages or as an emergency supply. It is also ideal for use in very remote areas where it is difficult to build land based power supplies and infrastructure. In the case of the oil and gas industry, the power barge can facilitate the movement of resources from new development fields relatively quickly, compared to the time required to build a complete power station,” describes Peter.

Unlike traditional custom-built barges, where ABS classification is secured during construction, the new ASRY-Centrax power barges are ABS classified up front due to the standard configuration. As with any new development project, a lot of work has already been completed in overcoming challenges such as the integration of all support systems for the generator sets into a confined space.

The first two barges have already been put into manufacture by ASRY with potential availability in just 14 months time. In terms of interest in this self-contained power concept, initial signs are encouraging for a number of key targeted markets: “We have had enquiries for a potential 14 barges already, some of which are in quite a late stage of development. One of the potential customers for the system is someone who finances the build, and then leases out the barges. This availability for short delivery also offers applications in humanitarian and relief initiatives around the world.

“Equally, there are areas like Nigeria that have a lot of oil and gas reserves, but it is difficult to build the infrastructure to take advantage of these. The attractive quality of the power barge is that you can take a fully commissioned and ready to use power station into these remote and hostile areas, where the risks associated with building fixed infrastructure are high,” he continues.

The potential of the power barge venture to open up new markets and opportunities to Centrax is particularly welcome given that many countries are currently continuing to suffer from the economic downturn. “Our traditional market of Europe has been quite challenging in recent years, as the financial recession has meant a lot of capital projects are either being cancelled or delayed. This is one of the reasons why we have focused on emerging markets such as Russia, which has been very successful for us. We have also supplied equipment into India, and we are now looking at developing our activities in the Gulf states and Middle East on the back of our relationship with ASRY,” explains Peter.

Indeed recent activity within the business, such as the new joint venture and the contract with Siemens, has served to extend and capitalise on the range of power products offered by Centrax, at a time when others may be consolidating. Keen to maintain this momentum, Peter sheds some light on Centrax’s strategy: “As well as the barge concept, from an oil and gas perspective we very much want to concentrate on our export into Russia and consolidate our success in this market by expanding our customer base. We are also looking at similar activities in India, where currently a lot of potential is being held back by the lack of infrastructure for distributing the gas and bringing it onshore from the fields. We hope that this improves in the future to enable us to fully take advantage of the potential this county holds.”