Back to Profile Gallery > Chart Ferox

Joining the Chart Industries group in 1999, Ferox added ‘Chart’ to its name to emphasise its strength as part of this leading global manufacturing group. “As part of Chart Industries, we focus on everything related to cryogenic engineered systems for the industrial gas, and oil and gas industries,” says Hans Lonsain, managing director of Chart Ferox.

“Chart Industries has three divisions: Distribution & Storage, BioMedicalm and Energy & Chemicals. In 2012 the group as a whole had a turnover greater than one billion dollars. We have around 4900 employees working for Chart and approximately half of our customers are in the US and the other half are located in Asia and Europe. Sales in Asia are growing fast. There is a large potential for growth there, while in Europe we have seen a slowdown of sales in our industrial gas businesses due to the economy. Despite this, we predict growth, in particular in our energy-related businesses.”

The majority of Chart Industries’ manufacturing locations are in the US, but a number of factories are in China and Europe. Chart Ferox’s large facility in Decin, Czech Republic, has a strong workforce of 500, who manufacture various vacuum insulated cryogenic tank designs. Volumes range from several hundred litres, through to engineered tanks up to 1000 cubic metres. In this latter category, the first 1000 cubic metre tank (HT-1000) was completed in 2011 and became the largest shop-built vacuum insulated tank in the world. Its diameter is almost six metres, it has a length of 48 metres, eight-bar working pressure and a weight of 212 tonnes. Chart Ferox also produces mobile and transport equipment, vacuum insulated pipe, ambient vaporisers, LNG satellite plants, LNG ship and vehicle fueling systems, and offers complete turnkey installations for LNG fueling stations.

Having developed and supplied LNG/LCNG permanent vehicle fuelling stations previously, Chart Ferox’s new mobile LNG fuelling station is a step towards building a flexible infrastructure of fueling opportunities for heavy trucks and buses. The station consists of a 20 foot ISO container with a 20 cubic metres gross volume tank, a saturation vaporizer coil, a centrifugal pump and a control box, including a system to prevent methane emissions. Having two different modes of operation gives the station a major practical advantage, as it can operate either as an LNG fuelling station with a typical flow of 150 litres/min, or alternatively as a standard LNG delivery container with a maximum flow rate of 400 litres/min, thus providing high flexibility. The station has been delivered also in a 40 foot version with the volume of 43.5 cubic metres. 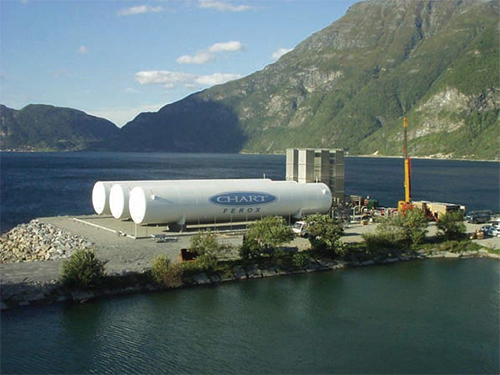 Furthermore, the mobile station is equipped with a calibrated flow meter and printer for billing. To power the mobile station, electricity is generated by on board hydraulics, eliminating the need to be connected to the electricity grid. The product is suitable for quick installations for small fleets of LNG vehicles and promotional demonstrations. “As the role of natural gas in the world energy supply grows, we have been paying particular attention to the LNG sector as it is currently growing more than our traditional markets,” says Lonsain. “There has been more of a push into the clean energy market in Europe as directives come into play and I expect there will be between 20-30 fueling stations being built all over Europe this year, when four to five years ago there were none.”

As a pioneer in liquefied gases such as LNG, Chart Ferox’s success in a competitive market is driven not only by its membership in the Chart Industries group, but also by the large investments put into developing new and innovative products at the Chart group’s various state-of-the-art R&D centers. On top of this, the company has also ensured a strong foothold in countries around the globe by offering local service with employees who speak the language, which results in better customer service and the efficient delivery of products around the world.

With a strong history of innovation behind it, the future looks positive for Chart Ferox as it continues to develop new equipment for an ever-changing and demanding industry. “We aim to expand our organisation to meet increased interest in LNG and will also continue to play an active role in the development of ISO and EU regulations related to the new natural gas industry,” says Lonsain. “To prepare for this growth, particularly in areas such as Asia, we aim to resource more high quality engineers to ensure future innovative products to our customers. For example, as the emission regulations in the shipping industry become more stringent, we will continue to focus on this market over the next few years.”