The company, which employs some 4000 people, operates a large and modern civil helicopter fleet, with over 270 aircraft in around 30 countries.

With roots that date back to the beginnings of the commercial helicopter industry, CHC has developed through a combination of organic growth and strategic acquisition, as Dé Jansen, director flight standards at the company, explains: “CHC has grown by acquiring other innovative, pioneering and successful companies from across the globe. This has happened over some years, and we’ve worked very hard to take the best of the various local working methodologies and individual identities to create ‘one’ CHC.”

Today, CHC has two major operating divisions; CHC Helicopter Services and Heli-One, which is the world’s largest helicopter maintenance, repair and overhaul business. “Around 80 or 90 per cent of our flying activities are for the oil and gas industry, predominantly transport operations, while the remaining portion is for search-and-rescue (SAR),” confirms Dé. “Oil and gas operations usually consist of transportation to and from offshore oil and gas platforms and vessels, and each year CHC’s aircraft carry more than one million passengers between its bases and their offshore workplaces.” 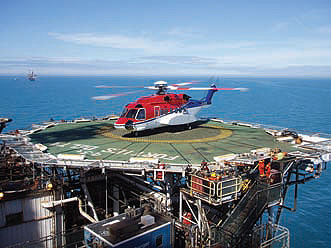 Australia, Norway, Brazil and Kazakhstan. “Our SAR operations can essentially be split into two key areas,” says Dé. “The first is full-state SAR, which is the type of work that we carry out in the UK, Ireland and in Australia, where we provide SAR on behalf of the State or coastguard authorities. We also provide SAR support or cover for our oil and gas operations. So, where one aircraft is operating oil and gas transport, we have a second helicopter ready to provide emergency SAR should anything happen to the transport aircraft, or to provide SAR or medical transport capacity to all staff employed offshore.”

In order to complete the wide range of operations required CHC’s fleet encompasses a number of aircraft types. “Our fleet, particularly the oil and gas fleet, is varied really to reflect the various jobs we undertake,” says Dé.

“At present we operate some nine aircraft types, but since 2005/6 there has been a transition from many customers to looking mainly towards the newer aircraft models, such as the EC225, the S-92 and the AW139.” CHC operates all of these aircraft in its global fleet, as well as Eurocopter AS365 series, AS332L series, and Sikorsky S-76 and S-61 types.

Regardless of the operation being conducted, one constant remains throughout CHC’s work: it’s a total and dedicated commitment to helicopter and aviation safety. Operating in the offshore environment and with oil and gas companies worldwide, CHC has gained unique and comprehensive knowledge and experience of travelling to some of the world’s most challenging locations and, as such, the company boasts an unparalleled safety culture. “Safety is the key factor,” Dé explains. “The common theme no matter where you are is the desire to improve safety. If you compare helicopter flights to fixed wing aviation then we are always aiming to get as close as possible to the highest safety standards that are expected of the customers and to achieve as low as possible safety risks in all aspects of our operation.”

Safety runs throughout CHC’s core. For example, it has established an Integrated Safety Management System (SMS) based on the standard SMS, which is a systematic process used to identify potential hazards, assess risk and develop appropriate response plans. The Integrated SMS takes this one step further and is in place across CHC’s operations permeating every single facet of its business from processing basic paperwork through to piloting an aircraft or arranging flight plans. These, alongside both proactive and reactive systems that are in place to continually improve safety, have seen CHC achieve an industry-leading accident avoidance rate and superior quality standards.

CHC’s commitment to safety extends to other avenues also. For example, the company holds an annual Safety and Quality Summit (to be held this year between March 18th-20th in Vancouver, Canada), which attracts delegates and key personnel such as regulators, fixed wing and helicopter operators and related industries, which gather to discuss the key issues in aviation safety worldwide. Similarly, the company is engaged with the European Helicopter Safety Team (EHEST), which brings together manufacturers, operators, research organisations, regulators and accident investigators with the goal of reducing the helicopter accident rate by 80 per cent worldwide by 2016.

CHC remains committed to quality in all aspects of its operations. As a market leader in oil and gas and SAR, CHC’s continued dedication to improving aviation safety means that operators in these industry sectors need look no further when requiring safe, effective, on-time and comfortable helicopter transportation for any activity.