CHC Helicopter is the world’s largest provider of helicopter services to the offshore oil and gas industry, with upwards of 250 aircraft operating in more than 35 countries worldwide.

Oil and gas pedigree
Aberdeen is one of the key global hubs for CHC from where it deploys some 18 aircraft – with several new-technology aircraft introduced to the fleet in recent years – from its heliport facilities.

The company’s operations from Aberdeen can be dated back to the summer of 1967 when BEA Helicopters first began offshore transportation work. There followed a succession of business acquisitions and buy-outs over the subsequent decades until those operations became part of CHC’s global portfolio in 1993.

Today Aberdeen is the headquarters for all of the European operations, which services around 55 per cent of the North Sea market from a number of bases in the UK, Norway, Denmark and Holland.

Commonly reckoned to be the world’s busiest civilian heliport, CHC last year moved more than 250,000 passengers from Aberdeen, clocking up over 27,000 flight hours in the process.

Its fleet at the base features an increasing number of the most modern aircraft types of its class currently available – the Sikorsky S92 and Eurocopter EC225. The majority of the fleet is comprised of Super Puma aircraft – the traditional ‘work horse’ of the North Sea industry.

Safety is key
Key to the company’s operations has been its commitment to improving safety in the offshore industry. In a difficult year for the energy sector, the company worked closely with Oil & Gas UK’s Helicopter Task Group over the reintroduction of Personal Locator Beacons (PLBs) for the North Sea workforce, and helped Oil & Gas UK with the production of an educational DVD designed to answer frequently asked questions about helicopter safety. CHC was also a key player in developing the pro-active Helicopter Safety Awareness Course for all offshore safety reps and continues to work alongside fellow operators in delivering this educational package.

CHC also continues to strengthen the reach and effectiveness of its well established Integrated Safety Management System (SMS). Its bespoke and proven SMS software supports a fully accessible reporting system for all of its operations within Europe and elsewhere in the world, providing a complete picture of what hazards need to be managed as well as allowing the effective transfer of safety-related data and best practice.

The Management of Change is a key element of CHC’s SMS and the application of those principles was instrumental in leading the successful introduction of both the EC225 new technology aircraft and the S92s. Technology has also been introduced in the increasing employment of Flight Data Monitoring across a myriad of aircraft types in Europe and beyond; the analysed data providing key information for awareness material and training feedback to flight crews.

Another SMS key element is Risk Assessment/Hazard Management and these principles were fully employed in allowing the company to deal with the unexpected arrival of the recent volcanic ash cloud, ensuring a safe and controlled return to flying operations in as short a time as possible across all five of the European countries in which CHC operates.

Technology-led
CHC has its own repair and overhaul division, Heli-One, which not only maintains the CHC fleet but has many external customers to whom it provides a variety of services from one off modification work to full logistical support.

President of CHC’s European Operations Tilmann Gabriel said: “We’re setting the standards in terms of customer delivery and safety around the world and our investment in new technology aircraft means we’ll remain at the forefront of our industry.

“We move the industry that moves the world as we transport personnel to offshore installations in key regions around the world. Wherever we fly, we have a common purpose: safety and simplicity for our customers.

“With this in mind, we have built a seamless, integrated operation, incorporating safety systems, logistics, personnel and support. We have created one centralised operations centre to co-ordinate and plan flight programmes and crew utilisation throughout Europe.”

Search and rescue
Alongside its oil and gas pedigree, CHC is the world’s leading provider of civil helicopter Search and Rescue (SAR). The recently renewed contract to provide search and rescue services to the Irish 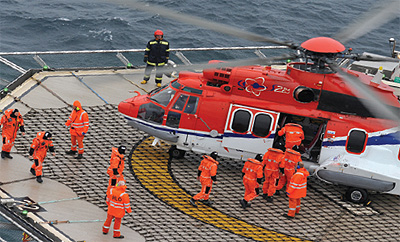 Coast Guard will see the fleet upgraded from the existing Sikorsky S61s to fully SAR-equipped S92s. CHC is also part of the Soteria consortium, which has been appointed preferred bidder by the UK Government for the multi-million pound long term contract to provide all of the UK’s SAR helicopter services from 2012 onwards.

Central to each bid was CHC’s understanding of the requirement gained by the practical experience of providing the service for many years. At the core of future SAR services will be the S92 aircraft, which has already more than proven itself in CHC’s current SAR operations in the harsh and challenging coastlines of the northern most points of Scotland. Configured especially for SAR operations, the S92 is the ideal platform to ensure the highly trained, and committed rescue crews are best equipped to deal with the most hostile of environments. When it comes to saving lives, only the best levels of service are acceptable.

“We have added another level of expertise to our business and are at the forefront of this market in terms of introducing and operating the best available technology. We are very proud of the professionalism and dedication of our crews that deliver the critical life-saving SAR service,” added Gabriel.

“Oil and gas and SAR are our two core businesses and we are ideally placed to deliver first class solutions in both. With ongoing development in the northern North Sea we have to adapt our programmes and that’s where I see several opportunities in the future. The move from military to civil SAR in the UK is also an interesting development, and one that can be easily replicated elsewhere in the world.

“Our customers want the latest technology to improve performance. We have to balance financing new technology within the price expectations of our customers, whilst staying continually alert to new safety developments. For us customers are the daily focus of our attention, flying them safely, and exceeding their expectations.”

CHC recently announced the appointment of Bill Amelio as CEO. Based in Canada, Amelio has extensive international experience with several major corporations and has been tasked with taking CHC to the next level of performance.