Back to Profile Gallery > Chemex LLC 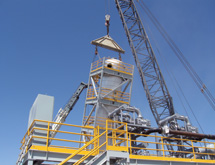 A supplier of new and refurbished modular refinery equipment, Chemex LLC links clients’ oil and gas project needs with new or existing, used modular plants and equipment. Based in South Jordan, Utah, the company has a fabrication facility in Bakersfield, Calif., and is expanding fabrication to Houston.

Different Approach
Chemex has increased revenue every year of the past four, and its owner uses profits to reinvest in the company. “The owner hasn’t taken a return and continues to invest in us,” Summerhays says. “We’ve grown from a small business five years ago to a mid-size business.”

A factor that sets Chemex apart is the way it works on projects. Its core business is modular processing units, and it fabricates differently.

“Instead of building in the field, we build in our shop for fixed costs, labor and environmental conditions,” Summerhays says.

“We can deliver more quickly and efficiently with modular construction than traditional, stick-built construction,” he continues.

This means site and civil work can go on simultaneously. Tanks and piping can be installed at the site. The traditional method means everything else must be done before processing units are built.

About 99 percent of its business is international because new refineries haven’t been built domestically since the 1970s. Chemex will work on refineries and topping plants globally while developing gas-processing modular units that can turn natural gas into diesel.

Not all projects are outside the United States. Last November, South Dakota’s Three Affiliated Tribes announced that Chemex will design and fabricate the process units for its planned $400 million oil refinery. It will be the first refinery built in the United States in more than three decades, processing about 20,000 barrels of Bakken crude oil daily.

“We hope to have agreements in place soon,” Summerhays says.

Above and Beyond
Chemex is trying to get the message out about the range of projects it can work on. Summerhays says the company has received requests for more complex, high-pressure units. It is in the development process of modularizing high-pressure units, coordinating with several major process technology licensors.

Online efforts help set the record straight. The company relies on Internet marketing and the continued development of its website, as 90 percent of inquiries come through its website.

The Houston move is key because Chemex wants to be in the center of the oil and gas universe.

“The shop will be state of the art, allowing us to work on four or five jobs at once,” Summerhays says.

Since the company already ships overseas from the Port of Houston, fabricating near the port removes the step of trucking units from California. The company isn’t closing California, as it has refurbished used equipment there since the 1970s. That will continue.

“That business will stand on its own and remain Chemex LLC,” he says. “Houston will be Chemex Modular. We should be in by late summer; our first job is scheduled for early fall.”

Chemex’s presence in Houston will allow access to the region’s talent pool. This is on top of existing emphasis on education. Chemex pays 100 percent of tuition and additional training and certification for employee education.

Chemex has carved out a strong identity for itself as a supplier of new and refurbished modular refinery equipment. “This is an exciting industry,” Summerhays says.

“We will work on jobs domestically as they come and will spread out around the world to get projects done anywhere,” he adds.