Back to Profile Gallery > Chirton Engineering

“Supported by Paul’s 32 years of experience in the sub-contract machine shop environment, the company’s break even figure for its first year of trading was £125,000,” reveals Michael Morris, business development manager of Chirton Engineering. “By the end of its first 12 months in existence the company had managed a turnover of double this amount, proof if ever it was needed that a positive future lay ahead to build on.”

Throughout subsequent years Chirton Engineering has successfully achieved year-on-year growth and in turn has increased its unit size to some 16,500 square feet, added further machine capacity and expanded its workforce to today’s total of 47 employees: “In December 2010 the company’s order book stood at a total value of £400,000, whereas today this exceeds £1.5 million,” Michael enthuses. “In fact, such is the level of demand coming from the company’s clients at present; it even has to refuse work at this time.”

Rather than rest on its incredible performance over the last eight years, Chirton Engineering has continually worked to reinvest its profits in machinery, infrastructure, personnel and training: “In September 2010 the company set about doubling in size by increasing its production space at a cost of £70,000. This was an entirely self-funded development and one that went a long way to helping Chirton Engineering reach a point where, 12 months later, it had already outgrown these premises,” Michael explains. “This growth now allows the company to examine the possibility of broadening out into other fields, such as the alternative energy sector for example.”

Having benefited greatly from having its foundations built up on Tyneside, where so many sub-contractors have also profited throughout the years, the company has formed a strong client base in the North East of the UK, a fact that has resulted in its parts now being found in use throughout the world, from the Gulf of Mexico to Iraq and into Africa. In the last several months of 2010, Chirton Engineering also celebrated sending its first job to Norway and exporting similar work to Germany, Holland and China for the first time. 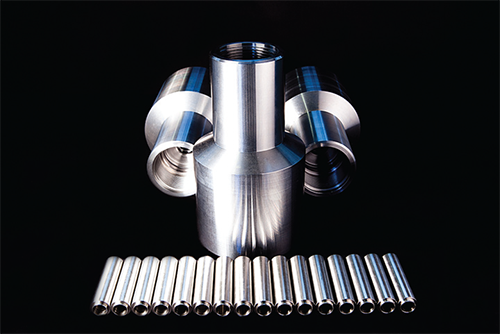 This period of increased activity continued into December 2011 with one possible contract currently in the early stages of negotiation being potentially worth more than £4 million. As Michael states, there are a number of reasons that contribute to the success of Chirton Engineering: “With an owner who is extremely hands on, this is a company that has the flexibility to make on-the-spot decisions, which can make the difference between winning and missing out on contracts. Its highly skilled machinists are supported by a continued investment in the very latest and best tooling, allowing them to carry out their work and produce quality products that are delivered on time and meet a client’s specialised requirements.

“Chirton Engineering is a company that is acutely aware that its business is only ever as good as its employees. Not only does it actively promote the progress of these individuals through training programmes, it is also involved in providing apprenticeships and work placements with a local sixth form high school. Each apprentice stands shoulder to shoulder with an experienced employee who takes the opportunity to pass on his or her vast experience and knowledge. Not one of these apprentices’ acts as simply a floor sweeper or tea maker, rather they are seen as young engineers-in-training and are treated as such.”

Looking towards the future, the company is presently in the early stage of discussions regarding the construction of a purpose built 37,500 square foot factory, built on a 50,000 square foot site: “From an operational perspective the company is focused on expanding further into Europe,” Michael says. “Chirton Engineering has bucked the trend, remaining a thriving entity at a time of great economic uncertainty. Potential new clients are approaching the company for work on an almost daily basis and such is the demand that even with 100 machines it would not be able to meet every request.

“This success has not gone unnoticed and in the last quarter of 2011 the company received an official visit from Deputy Prime Minister Nick Clegg who reaffirmed the coalition governments’ belief that Chirton remains a major cog in helping the North East of England return to being a continental powerhouse in the field of engineering. Having won the North Tyneside Manufacturing Award for 2011 we were put forward for the Business of the Year, amidst stiff competition from the other section winners we were successful in winning the overall title of Business of the Year Award for 2011, Chirton Engineering looks forward to spearheading this rejuvenation on Tyneside.”