Back to Profile Gallery > Clayton of Belgium NV

Founded in 1935 to investigate and develop new concepts in engineering, Clayton Steam Systems is a world leader in the design and supply of advanced steam systems.

The unique design particularly succeeded in terms of operational and efficiency advantages, as well as its small size and weight, which made it suitable for any steam application. The Clayton Exhaust Gas Boiler operates on the same tried and tested principle, and is supplied for a wide variety of industrial applications to recuperate heat from waste gases.

This design also gives rise to a number of advantages, many of which are a direct result of not using a large pressure vessel filled with water to produce steam. In particular, the Clayton Steam 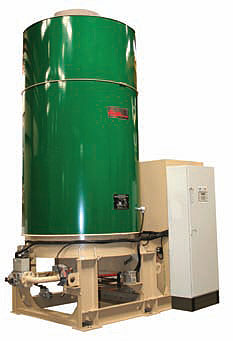 Today Clayton Steam Generators are available in sizes from ten to 1300 Boiler Horsepower (BHP), which equates to 100 to 13,000 kilowatts (kW) or 157 to 20,000 kilograms (Kg) of steam per hour. The units are designed to burn natural gas, propane, light oil, and heavy oil, as well as a combination of fuels. In addition to the generators themselves, Clayton provides a complete line of feedwater components that can be packaged together in a variety of skid-mounted configurations, and complete contained boiler houses. As such, the complete boiler system is pre-piped, wired, inspected and tested before delivery, ready for immediate hookup on site.

As an extension of this range, Clayton has also developed a series of steam generators for superheated steam. These units use the same proven design as the basic Steam Generator, but with the addition of an integral superheated section to the helical coil the steam is superheated to temperatures of up to 343°C and 57 bar pressure. The boiler can also be provided in a configuration that allows the user to provide either saturated or superheated steam as desired.

The third cornerstone of Clayton’s business is a complete range of heat recovery systems and exhaust gas steam generators for marine, industrial and power plant applications. The most popular use of the units is co-generation, where as well as burning biogas, diesel, heavy fuel oil and natural gas for reciprocating engines, the system also recovers waste heat to be used for engine plant or in the factory’s process and production activities.

To accompany its hardware, and to protect the investment made by its customers, Clayton has developed a successful water treatment programme designed to ensure trouble-free and cost-effective operation of its steam units. All of the chemicals used for this purpose have been especially tailored to Clayton Steam Generators to give the best possible protection. This includes a number of compounds for specific requirements such as preventing condensate corrosion, elevating the PH of the feedwater, protective coatings, as well as general purpose oxygen scavenging and control of residual hardness.

Having been operational for over 50 years in its own right, Clayton of Belgium is the company’s headquarters for Europe, Africa, and the Middle East, ensuring the production, sale, and service of thousands of advanced steamsystems throughout these regions. An extensive network of sales and service representatives serves to support this spread. From this location, Clayton of Belgium supplies a huge variety of customers including manufacturing, dairies, pharmaceuticals, power stations, beverages, hospitals, petrochemicals, aerospace, chemicals, textiles, automotive, electronics, shipping, food, horticultural, metal treatment, and converting.

Recently, Clayton of Belgium supported Ytong, part of the international manufacturer Xella, in the replacement of three heavy fuel oil fired conventional firetube boilers at its Burcht facility. The plant utilises steam in order to cure its concrete products, which are then used in construction projects. After a study into available technology, the Clayton Steam Generator was selected as the best solution, with two Model EG-604-1 units installed. The new system has a much smaller footprint than the old boilers, and also offers stable steam pressure even during rapidly varying loads. The Clayton Steam Generator also makes the old pressure reduction station obsolete, as steam can be fed directly to the autoclaves at the generating pressure.

Another notable development has been Clayton of Belgium’s successful commissioning of a mobile steam plant in the Algerian desert. This type of solution is ideal for circumstances where a steam supply is required for more remote locations, or when portability is necessary. The complete steam system is installed in two trailer-mounted containers and is designed to run completely independently of any external services with a supply rate of over 8.5 tonnes of steam per hour. The first trailer contains the power and feedwater units, as well as a compact electricity generator, whilst the second trailer is home to three Clayton Steam Generators.

As these, and numerous other successful projects across the world, demonstrate, when it comes to providing an economical, safe, and reliable source of steam, even after all this time the principles behind the Clayton Steam Generator continue to generate results.