Back to Profile Gallery > Coalview Ltd. 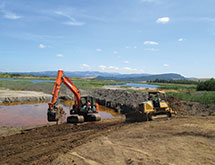 For Coalview Ltd., the waste materials left behind from coal mining are not an unpleasant, but necessary, part of the process – they’re an economic opportunity.

The Coral Gables, Fla-based company specializes in processing the refuse – or slurry – from coal mines into usable fuel that can be sold back to end users. Slurry consisting of coal fines, water, rocks and dirt is produced during the processing and washing of coal and other minerals. Most slurry is disposed of above ground, either in small pits constructed of coarse refuse called slurry cells or in lakes or ponds called impoundments, which are generally constructed by damming up a hollow at the mine site.

“We are one of the few companies who can perform sample testing and analysis of coal slurry impoundments,” says David Henry, president of Coalview’s recovery group. The company uses a proprietary drilling system – which it calls Vibracore – to take and transport samples.

“We have perfected the Vibracore drilling technique over hundreds of successful slurry pond drilling projects,” the company says. “We have developed a unique 8-wheel drive, low-ground-pressure, all-terrain, amphibious drill rig that is capable of drilling quickly, accurately and inexpensively even in the hardest-to-reach places. We are familiar with slurry deposition patterns so we know where to locate holes for reliable results.”

Collected samples are then transported back to the company’s laboratory in Somerset. The company calculates the volume of the waste reserve to determine the rate at which reusable materials can be recovered.

“Our ability to sample and analyze these materials is truly what sets us apart,” Henry says. If an impoundment is deemed to be a viable resource, the company then designs, develops, builds and manages a coal recovery plant to process the slurry, he adds.

The company was founded in 2011 following the acquisition of Beard Technologies, a fine coal recovery company based in Oklahoma City, by energy technology investor David Schwedel. Beard Technologies, founded in 1990, successfully constructed and operated more than a dozen coal recovery plant projects before its acquisition by Schwedel, says Henry, Beard’s former president.

Experience Applied
Coalview in 2013 secured $42 million in financing for its first major project, a 200-ton-per-hour fine coal recovery plant at the former Centralia Mine site in Centralia, Wash. The Coalview Centralia project will process the contents of three impoundment structures containing more than 20 million tons of slurry refuse on behalf of TransAlta, the owner of coal and gas-fueled power plants near the mine, which closed in 2006.

+ A two-stage concentrating coal spiral, which will separate the usable part of the slurry material from dirt and other materials;
+ Dewatering technology, which reduces the moisture content of the slurry.
Recent company investments include the purchase of KeLa Energy, a leader in engineered fuel production. KeLa’s patented technologies amalgamate waste coal fines,and other coal processing waste streams into valuable engineered fuels. The fuel is water resistant, easy to handle and has proven to lower SOx, NOx and VOC emissions.

Non-usable materials in the slurry at Centralia consisting of native soil and minerals will be processed through a two-stage thickener process system and then disposed in an existing open pit and reclaimed partly by creating desirable wetlands.

The removal of the slurry impoundments and the filling of the open pit significantly reduces a sizeable reclamation liability for TransAlta. The reusable fine coal portion of the slurry will be transported via conveyor belt to TransAlta’s coal stockpile, Henry says.

The dredging system used to transport the slurry was designed by Coalview in conjunction with Rohr-Idreco Sludge Systems of Richmond, Wis. Henry has worked with Rohr-Idreco on other projects dating back more than 15 years. Dredging is the best way to handle the material because it is too wet to transport through conventional means such as excavators or trucks, Henry notes.

“This system uses a water jetting head, which loosens materials before they’re delivered to the suction, which is a more effective means to handle the slurry,” Henry says. “They designed this dredge to handle the specific needs of our system.”

Other major contributors to the project include Rock and Coal Construction, a West Virginia-based contractor specializing in installations for the aggregate industry. The contractor built and designed the plant systems, he adds.

The plant is anticipated to become fully operational before the end of 2014.

The Centralia project is the first of what Henry anticipates to be a long line of successful projects for Coalview. “We’re in various stages of development for recovery projects in Canada, Alabama, Illinois, Pennsylvania, and West Virginia,” Henry says.

Coalview is able to fund all of its projects upfront and can design, engineer, construct, install and manage plants. “Within the next three years, I expect to have several of these projects off the ground, and we’ll continue to grow the company into a global leader in coal technology,” he adds.