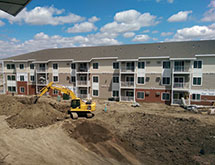 Consolidated Construction Co. Inc. currently performs projects in 11 states across the Upper Midwest. Founded in 1950, the company continues to grow and predicts it will soon be working in 15 states.

The company’s executive leadership is composed of four majority shareholders who each possess a unique skill set in construction. Formerly a family-owned business, the four shareholders obtained ownership in 2006 and resolved to diversify the company’s presence in both geography and business market. Based in Appleton, Wisconsin with additional offices in Milwaukee and Bismarck, N.D., Consolidated Construction launched a major westward push in 2011 spearheaded by executive vice president Mark Schwei. The firm then opened a new office in Bismarck, N.D., to serve the western portion of the Upper Midwest.

“Our roots were founded in more industrial projects for manufacturing facilities and food and dairy customers,” Schwei says. “When we set out to diversify, hotels, offices and retail centers quickly comprised about half of our work. Now, we’re finding that institutional work on schools, churches and daycares, and multifamily housing are growing steadily. That’s really where we’re finding a great deal of success today.”

With the addition of multifamily housing and more school work to its portfolio, Consolidated Construction’s business volume is growing. “We are currently enjoying a 30 percent increase in annual revenue for the third year in a row,” Schwei says. “God willing, it will soon be four.”

During the recession of 2008-09, Consolidated Construction added Steve Dietrich, a vice president of commercial lending at a Wisconsin bank, to its team. Dietrich’s experience in creating sustainable loan packages was brought in-house and offered to Consolidated’s customers in order to bypass deep financing delays experienced during recessionary times. By reviewing and cleaning up financial statements and creating loan package propositions in-house, especially when the banking sector was constricted, Consolidated Construction convinced lenders to extend financing more readily, and allowed more construction projects to move forward. “That helped us take it regional,” Schwei says. “If you were trying to build a hotel in 2009, the banks were compressed and trying to realign their portfolios based on federal intervention. So it was hard to get a project off the ground.”

With these economic development resources, as well as other preconstruction experts in house, Consolidated Construction could offer services such as assistance in reviewing site plans, floor plans, elevations and budgets to understand if projects were feasible regardless of market conditions. This unique, one-stop package was such a success the company expanded west into North Dakota in 2012, a move it had been researching since 2006. It is now pursuing opportunities in the Bakken Shale where infrastructure is lacking and opportunities abound due to oil production.

Oil Boom, Construction Boom
Consolidated Construction is not limiting itself to the Bakken oil region but is also active in the rest of the state, as well as South Dakota, Montana and western Minnesota. “We have seen substantial growth here,” Schwei says. “It is now more than 50 percent of company revenues. There is a demand out here for consolidated services that make construction faster and leaner.”

Strong partnerships with subcontractors from around the region haven’t hurt either, says Schwei, who shuttles from North Dakota to company headquarters in Wisconsin. “Having a large pool of resources allows us to work around labor shortages and keep schedules on target,” he says.

The company was selected earlier this year to construct a new liquid natural gas plant in Tioga, N.D. It is progressing well with first phase completion scheduled for the first week of August. Plum Energy Liquid Natural Gas contracted Consolidated Construction to build the $3 million plant to turn natural gas into liquid natural gas (LNG), which is utilized as fuel for engines and generators. “This project is extremely unique because it is the first LNG liquefaction plant to be built in the state,” Consolidated Construction says. The plant is slated to produce more than 10,000 gallons of LNG per day. Phase two of the project will begin in September and will generate an additional 60,000 gallons of LNG per day.

In addition to the LNG plant, Consolidated Construction is also constructing a new 7,000-square-foot elementary school in Menoken, N.D., a new Microtel Inn & Suites hotel in Moorhead, Minn., a 111-room, 71,000-square-foot Bismarck Holiday Inn, a 9,000-square-foot office building in Keene, N.D., and a 107-unit apartment building in Watford City, N.D., among other projects.