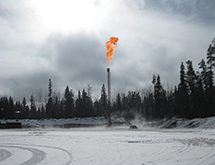 Engineering a corporate turnaround is not an easy task, but Contact Exploration Inc. has successfully managed it, President and CEO Steve Harding says. Though the company was once on the brink of bankruptcy, “We’re in a much more stable position today,” he asserts. “We’re probably averaging $1 million [in revenues] a month and growing.”

Based in Calgary, Alberta, Contact focuses on oil and gas exploration in New Brunswick and its home province. The company was formed 18 years ago, and after a few staggered starts, underwent a turnaround when Harding and COO Raymond Sully took over Contact in 2010.

Harding, who has 32 years’ experience as a geologist, previously worked at Husky Energy Inc. and Encana Corp. While working as an independent, he was asked to take a look at Contact.

In his evaluation, Harding saw an opportunity for a turnaround. Although the previous team had good ideas about Contact’s properties in Atlantic Canada, “They had not executed well operationally,” he recalls.

Following a friendly management takeover, Harding and Sully orchestrated a successful drilling program in New Brunswick, which re-energized the company. “We brought new technology to an old field, drilling a couple of horizontal wells and multistage-fracking them,” Harding says. “It allowed for the oil production to be much better and stabilized the company.”

Rich in Resources
Contact is primarily focused on its project in the Montney Formation at Kakwa in the Deep Basin of Alberta. After an evaluation indicated that the region was prospective for condensate-rich gas, Contact acquired a 25 percent interest in 16 sections of land in the area. Today, Contact has 72 net sections, 86 gross.

The company had great success with its first well in the region, and is currently drilling its 10th, Harding says. “The value of these assets is extremely high,” he says. “There’s room to drill another 120 wells on just the initial East Kakwa property.” He notes that currently Contact is drilling up to eight wells per year.

Critical Factors
Harding is proud of Contact’s turnaround, a company that was on the brink of bankruptcy, now on a steep growth curve. “We understood technically what needed to be done,” he says, adding that the company has drilled only successful wells under their leadership.

He credits the company’s turnaround to numerous factors, including the fact that Contact is a very technical company. “That is something we pride ourselves on,” he says.

For instance, he says, Contact has used sophisticated geotechnical modeling to find areas with the right characteristics for liquids-rich Montney reservoir. “In order for these projects to be successful, you need to have a good-quality reservoir that can hold reasonable volumes of hydrocarbons, but also be positioned in areas where liquids (condensate) have been preserved,” he says.

Another factor is Contact’s strong group of technical people, which includes Sully. “Ray has been instrumental in enabling our programs to be successful in using the best technologies and operational practices to grow the company and get these big wells drill and completed,” Harding states.

He also praises Vice President of Exploration Mark Hadley, who has more than 25 years of experience in oil and gas. “The combination of Mark’s exceptional technical insight and Ray’s strength in operations has enabled our growth in the Montney in a big way,” Harding states.

Big Deals
Contact will continue growing thanks to its Montney project, Harding predicts. “We have secured a significant piece of acreage in a rich oil and gas region,” he says. “From a value perspective, we’re amidst the best of the best.”

Although the Montney will be solid for years to come, “We’re in a very prolific oil and gas region,” he states. “There will continue to be other zones that become a very big deal. We’ll obviously be able to partake in that as well because we own a big piece of it.”