Back to Profile Gallery > Conuma Coal

Its relationships with local communities and government agencies were critical to Conuma Coal’s successful reopening of two British Columbia mines.

When it took over three mines in Canada last year, no one knew the name “Conuma Coal.” But the newly formed coal mining company pledged to bring back jobs and treat the surrounding communities with integrity. “I made a commitment to them that I wouldn’t do something that didn’t result in long-term security for their family,” President Mark Bartkoski says of his pitch to the people of northeastern British Columbia.

Nine months later, Conuma is proving that was more than talk. Its dedication to worker safety and collaboration with local officials and First Nations groups has demonstrated its willingness to act as a partner to all those living in the region. The community has reacted in-kind, welcoming Conuma and providing it with resources to help revitalize the local mining industry. The biggest vote of confidence came in May, when 80 percent of Conuma’s Wolverine Mine employees voted to decertify their union – a step Bartkoski took to symbolize their faith in the young company’s direction.

“This showed proof of how well our employees are buying in,” he says. “Those are the results of treating a team right and building a group of owners that are very much together in the output of the organization.” 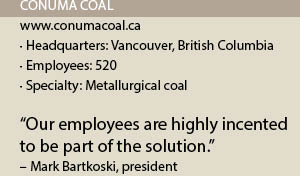 Ramping Up Production
Conuma began in 2016 when its investors purchased three Canadian coal mines from Walter Energy, but the seeds of the company were planted a year earlier. In mid-2015, five coal industry veterans founded ERP Compliant Fuels as a mining company specializing in metallurgical coal, which is used in steel production. ERP started with four distressed mining operations in the United States and later bought three Walter Energy mines.

When the opportunity arose to acquire Walter Energy’s defunct mines in British Columbia, ERP’s leadership realized it would be more efficient to set up a separate Canadian entity that could better manage local regulations and security, while also allowing for some new investors. As a result, Conuma is not a subsidiary of ERP; rather, it is a stand-alone company.

Conuma owns and operates the three mines that formerly made up Walter Energy’s assets in northeast British Columbia: Brule, Wolverine and Willow Creek. The company is headquartered in Vancouver and maintains a regional office in Tumbler Ridge.

The acquisition of the Walter Energy mines was completed on Sept. 9 of last year and the first truckloads of coal left Brule 13 days later. The speed of the change in ownership and resumption of mining was in response to the strength of the coal market – the price of premium hard metallurgical coal had doubled to $180 per metric ton from the early fall of 2016 when Conuma took over the mines to the end of the year.

Not wanting to lose out on rising commodity prices, Conuma accelerated its schedule for Brule and even moved up the reopening of the Wolverine mine. Production employees for Wolverine were not hired until January, but the company began to prepare the mine a month earlier to shorten the lead time to production.

Wolverine was also still sitting on a couple hundred thousand tons of coal that had been dug out by Walter Energy but never processed and shipped. Conuma transported the coal down to Willow Creek where it could be shipped to market. “The Wolverine operation was originally forecast to be open in fall 2017 but the market responded strong to the quality of coal that would be available so we decided to open early and hire another 250 employees,” Bartkoski explains.

Between Brule and Wolverine, Conuma has already produced more than 2 million tons of coal. All of that has been shipped from the Willow

Creek mine loadout. The mine at Willow Creek itself has not yet reopened, but the location serves as the hub for the other two sites.

However, the accelerated speed of the mine reopenings has created a transportation challenge. When Conuma decided to restart Wolverine at the beginning of 2017, it found that the rail line that carried coal between Wolverine and Port Ridley was in need of extensive repairs. Conuma had to scramble and lean on its partners to speed up that work. “We joined with CN [Canadian National Railway] on an investment to rehab the rail line to get it in quicker,” Bartkoski says.

The railway is expected to reopen by Sept. 1. In the meantime, about 30 trucks are hauling 3,000 tons of coal along the nearly 40-mile route between Wolverine and Willow Creek each day. Another 8,000 tons are trucked daily from Brule to the Willow Creek loadout. From there, more than 10,000 tons of coal per day is shipped by rail to Port Ridley on British Columbia’s coast.

Although it will make transportation more efficient, Bartkoski does not expect the refurbishment of the rail lines between the three mines to increase production. Brule is already on pace to mine 2.4 million tons of high-quality, low-phosphorus and low-sulfur pulverized coal injection (PCI) coal. Likewise, Wolverine is expected to produce 1.4 million tons annually of hard coking coal. Between the mines, Conuma expects to have 15 years of production in the area – possibly more if it can tap into contiguous reserves.

Moral Responsibility
The previous closing of the mines left hundreds of people unemployed in the Tumbler Ridge area. Conuma’s attempt to revitalize the mines has returned many of those people to work, but the company must also take a different approach if it wants to find long-term success where the previous operators failed.

In restarting the mines, Conuma has two primary advantages over the previous operation: It purchased the mines during a low period for the market and has low debt, and new mining processes will help it run more efficiently. Conuma is following a different mining plan than what was used at Brule and Wolverine before. Cast blasting, for example, uses surplus explosive energy to remove overburden from above the coal seam more effectively than traditional techniques.

Other methods, bundled in the company’s Total Quality Control Program, are aimed at improving the quality of the coal. Conuma is mining the coal seams in different levels so it can customize the blending to create a homogenous product. The process allows Conuma to consistently offer customers coal that contains less than 9 percent ash and at variation of only 0.2 percent, making it very valuable for steel production. Higher levels of ash can result in quality issues during steel production, Bartkoski says.

Implementing homogenous blending required contributions and buy-in from employees at every level of the company – and serves as an example of the collaborative culture Conuma strives to create. “One of the signatures of Conuma is the fact that the people are very involved in every aspect of our business,” Bartkoski says.

The company holds monthly meetings with workers to discuss production goals, the quality of coal and other issues that arise. “We look at everybody as an integral part of the group,” Bartkoski says. “Our employees are very much incented to be part of the solution.”

It also offers an aggressive profit-sharing program that not only rewards productivity but also encourages workers to be vigilant about job safety. At the end of every month, if no accidents have occurred and production and quality targets are met, employees receive additional compensation in their paychecks in accordance with the team’s performance.

The program is one way Conuma teaches its workers to focus on loss prevention, which eliminates downtime and reduces waste. “Our business plan is that loss prevention earns long-term job security,” Bartkoski says. “Safety is an uncompromising value. It’s not a choice.”

The approach has seen immediate results. Through the first six months of 2017, four of the 17 major mine complexes in the province had perfect safety records – and three of those were the ones operated by Conuma. “Right now, we are the No. 1 safety-rated mining operation in British Coumbia and probably Canada,” Bartkoski beams.

Worksite safety is especially important considering the pledge Conuma made to take care of Tumbler Ridge and the other communities where it operates. “We have a moral responsibility to make sure we take care of the area we’re investing in and to be a blessing to the communities,” Bartkoski says.

Other mining projects often bring in outside workers to live in temporary housing, spending as much as $10 per ton on camp costs. That can quickly become expensive and eat into the security and profitability of a mine in the long run.

Because of its lean strategy, Conuma chose instead to hire primarily from the surrounding population. “We feel like that is a longer-term commitment to local communities,” Bartkoski says. “Partly because of that, we’ve earned a tremendous respect, appreciation and a partnership relationship with the community,” he continues.

Conuma has benefited from those relationships as well. Because it showed its willingness to hire and train locally, the government of British Columbia allowed Conuma to reopen the mines acting as a contract miner under Walter Energy’s original permits. The unusual setup meant that production could begin immediately while waiting for the permits to be transferred to Conuma. Within two months of reopening, 200 people were already employed.

“It’s been a neat success story to be able to show how industry, community and government can all work toward a common cause,” Bartkoski says. “Nine months later, we have 520 direct jobs and probably 4,000 indirect jobs.”