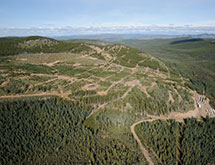 When Dr. Harlan Meade took over as president and CEO of Copper North Mining Corp. earlier this year, he knew right away there was a lot of work to do. The company had been spun off from Western Copper Corp. in 2011 along with the Carmacks Copper Project in Yukon and the Redstone and Thor properties in British Columbia, but things had not gone smoothly for the junior exploration and development company since then. Investors were wary about the Carmacks project, especially after a feasibility study completed in fall 2012 painted a less-than-rosy picture of the property.

On top of investors’ indifference to the company’s flagship property, the company was in serious debt to numerous suppliers. Meade says a revised look at the Carmack property is allaying investors’ fears about the project and generating new interest, and an unprecedented joint venture between the company and Chinese firms is putting it in position for a bright future. “This will be a very, very attractive project,” Meade says.

Hidden Assets
The only significant oxide copper project in Canada, Carmacks is an open-pit mine located approximately 220 kilometers from Whitehorse, Yukon. The initial feasibility study completed in 2012 was replaced with a new plan that Meade says demonstrates the true value of the property. At the same time, Copper North Mining Corp. has been hard at work paying down its debt and finding new methods of reducing capital development costs for Carmacks.

The 2012 feasibility study, for example, only considered the leaching of copper from the mine, but Carmacks also has considerable gold and silver resources.

Another problem with the original feasibility study that made investors nervous was the projected mine life at Carmacks. The site’s oxide resources are projected to last approximately eight years, Meade says. However, most investors are uncomfortable with investing in anything that does not have a mine life of at least 10 years. Again, the original feasibility study omitted a crucial fact – the Carmacks property has a significant resource of sulfide mineralization in addition to the larger oxide resources; leaching of the sulphide resources could add more than three years to the life of the mine. “We’re going to be here for a lot longer than the [original] feasibility study says,” Meade says.

In another effort to bring capital costs down, Copper North Mining Corp. took its feasibility study to China and shared it with some of the top engineering firms there to see if the project could be developed with Chinese equipment. “That basically gave us a second confirmation of significant capital reduction,” Meade says.

The company is close to announcing the Canadian firm that will oversee all the work on the Carmacks project, including the work being done in China. Meade says the formation of a joint Canadian/Chinese feasibility study is something that has never been attempted before. “That’s going to open a lot of eyes,” he says.

Climbing Back
Along with revamping the Carmacks project to become more attractive to investors, Meade says his other major task has been bringing Copper North Mining Corp. out of debt. “The obvious problem we had was we had the deficit and people were afraid that if they provided services they weren’t going to get paid,” he says.

The company has worked closely with its suppliers and vendors to work out a plan for getting the company out of the red, and Meade says so far it’s working. “Bit by bit, we’re getting close to the end now,” he says. “We’re not going to give up – we’ve said we were going to do this and we were going to find a way.

“We did find out who our friends were, and we’re not going to forget them anytime soon,” Meade adds.

Copper North Mining Corp. now is in a much better position with the Carmacks property than it was after the original feasibility study was completed. Meade says that the company expects its new study to be completed sometime within the coming year, and Carmacks could be put into operation by 2018.