In April 2019, waste management specialist Cory Riverside Energy appointed former Interserve director Dougie Sutherland as its new CEO. When we asked Dougie what attracted him to the new role, his answer was simple. “One of the deciding factors was Cory’s strategy around the river,” he said. “As a business, it is quite unique.”

Cory’s relationship with the River Thames dates back to 1896, but in 2020, the company sees the river as a green highway of the future. “Looking ahead, there is going to be more and more 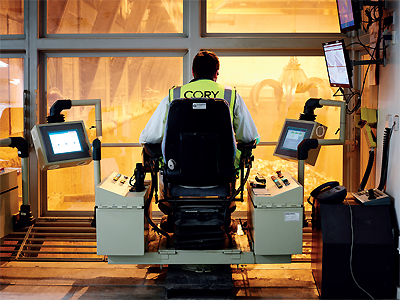 pressure, particularly in London, to get vehicles off the road, and the River Thames is a perfect natural resource to support businesses,” Dougie explains.

Today, Cory uses the Thames to transport London’s waste on a fleet of barges, before turning it into reliable, sustainable energy at its Belvedere energy from waste facility. The river-based infrastructure eliminates the need for up to 100,000 road journeys per year, reducing NOx emissions and contributing to a safer, healthier environment. “That’s why we continue to invest in the river,” Dougie says. “What Cory is doing is fit for the future already in many ways.”

Currently, around three million tonnes of the UK’s waste is exported abroad. Of the remaining residual waste, around half goes to landfill and around half is sent to Energy from Waste (EFW) plants such as Cory’s. Politico-economic factors continue to bring change and upheaval to the waste industry though, none more so than the Netherlands’ recent decision to increase tax on waste imports to €32 per tonne. “Around 1.8 million tonnes of our waste is imported by the Dutch,” Dougie states. “With these tax increases, and Brexit looming, the cost of exporting waste is becoming uneconomic. The question is, where does all the waste go?”

New facility plans
The most eco-conscious solution to this problem would be the construction of more EFW plants. Since 2011, Cory’s Belvedere facility has produced a total of over 3.7 million MWh of electricity from waste – enough energy to power around 140,000 homes per year over that period and a significant contribution to the baseload required in the UK. The company hopes that the introduction of a second facility in the coming years will enable it to address the significant discrepancy between the waste London produces and the city’s ability to process it, an issue that Cory has labelled ‘the capacity gap’.

“Energy for Waste plants are all pretty well contracted to capacity, so a second plant of a similar size to the existing one would be an important milestone for us,” Dougie says. The company has submitted a planning application for the new facility and is currently awaiting approval from the secretary of state. If the proposals are approved, Cory hopes to begin construction in the first half of next year. The plant could be operational as early as 2024. “It’s such a big deal,” Dougie says. “We provide an important public service and there remains a lack of infrastructure to deal with our 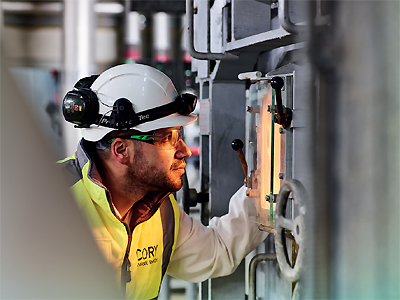 waste. The new facility would be a strategic asset. It’s not just the waste, but also the increased contribution we could provide to the UK’s baseload.”

Along with Cory’s existing facility, a new plant would play a role in the company’s district heating project. Strategic Infrastructure Development Director, Andy Pike, explains that the company is already in advanced discussions to take the scheme to the next level. “We’re actively in search of a strategic partner at the moment to work with us on district heating, from both the existing facility and the proposed new facility, out to the borough of Bexley and the Thamesmead area. It’s got potential to be one of the largest district heating projects in London.”

District heating plays an important role in Cory’s emissions strategy, which remains at the core of all its activities. “There are good economic reasons behind the project, but it also helps to reduce our carbon footprint,” Dougie says. “The offset by generating heat into a network is very, very meaningful.”

Exciting times
The importance Cory places on valuing its staff and ensuring their welfare is something that is paying off for the company. “We don’t struggle to recruit or retain,” Dougie states, though he thinks this may also be related to a public shift in perspective surrounding the importance of the environment. “People want to come and work for companies like ours. I suspect it probably wasn’t as cool to work for a waste energy company ten years ago, but comnow, it’s actually quite a cool place to be.”

It certainly is an exciting time to be involved with the company. At the end of 2019, Cory was named in The Sunday Times Top Track 250, a list of Britain’s top-selling, best-performing, mid-market growth companies. Dougie remains very humble about the achievement. “It was quite a surprise,” he says, “but any sort of recognition is always good.”

As London’s energy needs increase, Cory remains a key contributor to the diverse regional energy mix. With a potential new facility on the horizon, increasing the company’s capability to build on the circa 750,000 tonnes of waste it already turns into electricity per year, it certainly won’t be the last time Cory is recognised for its achievements.