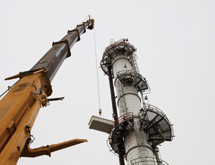 Some firms are willing to let their equipment go without maintenance, but not Crane Service Inc. “Maintaining our equipment is really high on our standards [list],” Marketing Coordinator Chris Martin asserts.

By doing so, Crane Service ensures that its machines stay reliable and ready for when its customers need them to perform, Martin states. “We’ll take up that expense and not skimp on the equipment,” he says.

Based in Albuquerque, N.M., the company sells and rents cranes to clients in the construction, nuclear energy, oil and gas, and mining industries. President Scott Wilson explains that Crane Service started operations in 1960, when its original owner saw a need for cranes in Albuquerque.

At the time, the city was still developing, Wilson says. “[The founder] got a few cranes and a few people together to help shape the city,” he explains. Today, Crane Service employs a staff of 165 and enjoyed sales of $34 million last year.

Wilson says that the company is a leader in its industry. However, “We’re by no means as large as some of our competitors,” he admits. “We’re kind of middle of the road when it comes to the size of our company.”

Changing With The Times
Crane Service has kept successful by changing as the construction and energy markets have evolved, Wilson says. “It is now a whole lot different than it was when I started [working here] seven years ago,” he admits. “The concerns over safety, quality [and] reliability of equipment, [and] environmental issues with equipment are totally different.”

The company keeps up by continually training its employees, Wilson says. Although it can be challenging, “That’s part of the changes in the industry,” he says.

Crane Service also has to provide daily and weekly training due to the diversity of its customers. For instance, “You might be in the Gulf Coast on Monday and the Rocky Mountains on Friday,” he says. “Every client has their own safety challenges.”

On another day, workers might find themselves working on site with nuclear waste, an oil rig or on a project related to green energy. “It’s just really diverse,” Wilson states.

A Good Business
After more than three decades in the crane industry, Wilson still enjoys working in it, especially at Crane Service. This is largely due to its staff, which includes “a lot of younger, smarter people,” he says. “It’s people like Chris Martin, who have come to the table with energy and passion for a newfound business, and take what they’ve learned [to make it successful].”

He also praises its branch managers and field workers. Many, he notes, have up to 20 years’ experience at Crane Service. “It’s a good business to be in,” he says. “We’re all happy here.”

Martin agrees. “There’s a lot of energy here, and [in a good] way,” he says. “Every day’s a different job for the field guys. They’ve seen … things that would boggle the minds of the public.”

The ability to enjoy the local scenery of states such as Texas and New Mexico does not hurt, either, Martin says. “It’s always a treat to be here,” he states.

Order of Excellence
Crane Service’s industry has experienced a large amount of consolidation, Wilson says. “The barrier to entry in the crane business is very high,” he admits. “It’s quite the capital-intensive business to be in.”

But Wilson is optimistic about Crane Service’s future. “Our strategy right now is not just to grow, but to grow with quality people and equipment and the right locations. We want to maintain this order of excellence.

“In seven years, we achieved nine locations when we started with two,” he says. “In the next five years, we can see [ourselves adding] five or six locations [to the] company.”