Back to Profile Gallery > Cryomar

A joint venture between the companies Innogas and ARITAS, Cryomar is a Norwegian registered limited liability company involved in the design, construction and installation of maritime LNG fuel and tank systems.

Also responsible for the engineering, procurement and delivery of these complete fuel and storage applications for ships based on pressure vessel technology, the complete system provided by Cryomar comprises of tanks, a ‘cold-box’ with valves and process equipment, a bunkering system and a bunkering station.

“Cryomar’s sister company, Innogas, was established some years ago and has long represented ARITAS and its capabilities within the Scandinavian region,” explains Ragnar Slettestoel, managing director of Cryomar. “ARITAS’ core business is cryogenics, something it has over 35 years of experience in, and has its own engineering capabilities that it uses to make full system designs for tanks, equipment and process systems. What the two parties discovered was an opportunity to service customers all around the world with LNG systems and that formed the basis for the joint venture.” 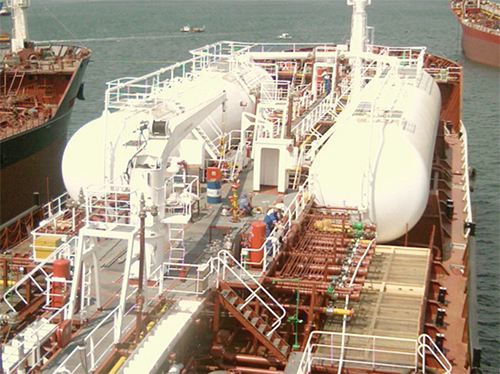 “Innogas has a lot of experience of working with cryogenic tanks, particularly pressure vessel type tanks with vacuum insulation,” states Audun Jetlund, managing director of Innogas. “These units are well suited to provide fuelling systems for ships, which is a business the company has wanted to move into for some time. What the two companies saw was that there is an increasing number of ships installing LNG fuelling systems, particularly operating in the North Sea, and the number is steadily growing.

“Since Cryomar was formed in 2010 there has been an even greater rise in LNG activities, and today there are now even tankers being rebuilt to incorporate LNG fuelling. Previously LNG fuelling has been most common for ferries, offshore service vessels, and liner operations. Even larger Ro-pax vessels may install LNG fuelling in the near future. So with different models of ships now looking to convert to this method of fuelling Cryomar, Innogas and ARITAS all foresee tremendous growth in this sector over the coming decade.”

ARITAS as a company was established in 1976 and in the time since has built up a long and distinguished track record for the quality of its delivered products. Tolga Eyyuboglu, owner of ARITAS, details how the growth of the company proves that the cryogenic and LNG business is on the rise: “ARITAS has customers spread throughout Europe, Asia, Africa and the Americas, customers that include Air Liquide, Air Products and Linde to name just a few. The emergence of LNG as a viable, environmentally beneficial fuel source has resulted in ARITAS expanding its own operations, constructing an additional facility with a total area of 86,000 square metres on top of its existing 22,000 square metres of operation space.”

As Audun goes on to highlight, there are numerous benefits that go along with a vessel converting to an LNG fuel system: “Above everything else this type of system generally makes for a cleaner vessel, one that creates fewer particles and reduces NOx, sulphur and CO2 emissions. These capabilities are of great importance to ship owners today as the environmental requirements enforced by IMO and EU are getting more strict in the next years. The onus is now on ship owners to adapt the way their vessels are fuelled and it is the major reason why many in the industry are predicting that by 2020 a very large percentage of those operating at sea will have an LNG fuel system.”

Boosted by the combined experience of the maritime market and LNG technology possessed by Innogas and ARITAS, and its ability to reach and service global clients from its base in Norway, the coming years are now all about developing Cryomar into a company that will lead the industry into a new era of vessel fuelling: “The majority of ship owners, builders and shipyards all share a common desire and that is to have access to complete service packages that can be attained in one place,” Ragnar says. “Not only do they want an LNG package, they also want the engines and various other systems, so Cryomar has a strategy now to build closer relationships with global manufactures and suppliers to be able to meet these one-stop-shop requirements of its customers.

“While it is difficult at this point in time to make exact predictions on just how rapid the increase in LNG projects will be in the short term, this is a growing market, and one which is not just confined to one region, but rather the world as a whole. As time goes on it is Cryomar’s belief that gas will equal, if not exceed, diesel use in the maritime industry, and with LNG being the cleanest form available its role in this change will be nothing less than substantial.”