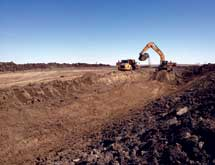 Pipelines are thought to provide the most economical transport of oil and natural gas, but if railroads were run the same way, all trains would go to the same place. The advantage of transporting crude oil by rail is that it can be shipped wherever in North America that the price of oil is best.

“Building pipelines is lengthy in time, and you’re committing yourself to a single market,” points out Dakota Plains Holdings Inc. President and COO Gabe Claypool. Contracts with pipeline companies can commit a crude oil producer to terms lasting from three to five years, and pipelines can take a similar amount of time to build, Claypool says. In a down market, such a contract can result in substantial losses.

“Rail is a one-year construction project and committing yourself to any market you want to go to,” Claypool notes. “That is exactly why people consistently say that crude by rail will be here for a very long time, and that’s supported with enormous investment.” Railroad, terminal and petroleum refining companies – even airlines – are investing in oil facilities near railroads, Claypool says.

The practice of transporting crude oil by rail is barely four years old. “The first crude-by-rail train launched out of North Dakota in December 2009,” Claypool declares. “We just celebrated our three-year anniversary as an industry. Our company has been here since August 2010. We’re the third-oldest crude-by-rail business in North Dakota.” From one transloading facility in 2009, the industry has grown to approximately 15 focused on crude by rail, many of them owned by large and midstream pipeline or oil companies, Claypool reports.

“We’re a little unique in our business model, where we own the terminal but we are also the marketing entity,” Claypool explains. “We are buying all the oil that comes through our terminal and putting it in our tank cars. We pick it up at the well in our trucks, from the storage tanks deployed to support each well. We drive the trucks to our terminal, load the oil into our tank cars and sell it at the destination or refineries on the East and Gulf Coasts. So we are as vertically integrated as you can get in the field side of the crude-by-rail marketing business. We have 1,100 tanks cars under long-term lease.”

Cold Construction
The Pioneer transloading facility is being built on a 192-acre site. It will consist of two 8,300-foot loop tracks that each can hold trains of up to 120 railroad tank cars. The tankers will be rolled into a building that can hold 10 such cars and then loaded with crude oil from two 90,000-barrel storage tanks, which in turn will be served by 10 truck stations and five pipeline interconnections. Enough space for a third storage tank is being set aside.

The new facility is being built next to Dakota Plains’ existing facility, which includes four 2,500-foot tracks. These will be converted when the Pioneer project is completed to transport the other inbound oilfield commodity supplies – such as proppant sand, concrete aggregate and diesel fuel – that are needed for hydraulic fracturing of oil wells. Claypool estimates the amount of materials needed for a single oil well can be up to 40 rail cars.

Construction of the $50 million Pioneer project by general contractor Piping and Equipment Co. Inc. began March 25 and is scheduled for completion in December. Approximately 20 subcontractors will work on the project. A bridge will be built over the tracks to provide 24/7 access to the more than 70 acres available for industrial development inside the loop.

“Mother Nature is one of our biggest adversaries in ongoing operations,” Claypool maintains. Construction can only proceed outdoors for six or seven months before the earth begins to freeze to a depth of four feet. Interior, aesthetic work can continue after year-end.

The soil at the Pioneer project has required much engineering. “It is basically a wheat field and not compacted at all,” Claypool maintains. “The soils are incredibly soft loam. You can accommodate it and work around it. It takes an enormous amount of soil sampling and boring to understand what you’re up against. There’s also an enormous amount of engineering that has to go into the soil, such as soil cement and increased foundational work.”

Once the Pioneer project is completed, additional projects are in the works for Dakota Plains Holdings, although Claypool cannot say what they are yet. “We’re building a very viable, long-term business here,” he says.