Back to Profile Gallery > Dammam Shipyard

Making a vision a reality

On 25th April 2016, Crown Prince Mohammad bin Salman outlined a grand vision for the Kingdom of Saudi Arabia, dubbed Saudi Vision 2030. An ambitious undertaking designed to reduce Saudi Arabia’s dependence on oil, diversify its economy, and develop service sectors such as health, education, infrastructure and tourism, the plans include 80 different largescale projects, each costing up to $20 million. Some of the goals set out by the Crown Prince include reinforcing economic and investment activities, expanding non-oil industry trade, and increasing government spending on the military, manufacturing equipment and ammunitions.

As expected, the announcement of Saudi Vision 2030 helped spark an increase in industry-specific projects. One of the beneficiaries of this has been Dammam Shipyard. A part of the Al Blagha Group, one of the largest marine infrastructure companies in Saudi Arabia, Dammam Shipyard, with its sister company Jeddah Ship Repair, is the premier shipyard in the Kingdom. Since 2015, the shipyard has completed 12 jack up rig repair and fabrication projects, and since its concession in May 2012 it has completed over 500 vessel repairs. Located in the King Abdulaziz Port of 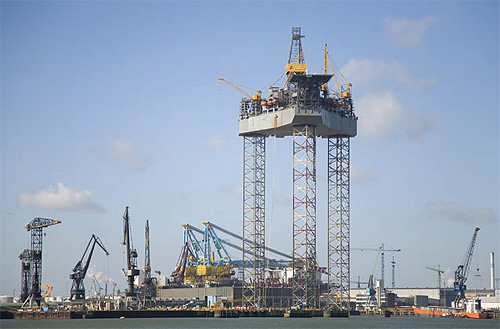 “As a proud Saudi-based company, we have been very focused over the last couple of years on supporting Saudi Arabia’s national petroleum and natural gas company, Saudi Aramco, and its contractors, as well as important institutions like the Royal Saudi Navy and the Saudi Coastguard,” explains Jason French, Chief Executive Officer of Dammam Shipyard. “As well as continuing to provide customers with ship and rig repair services, we have also expanded our passive fire protection, and blasting and coating applications.”

The latter activities are now being put to use in one of the most important infrastructure projects taking place in the Kingdom, the Riyadh Metro. A rapid transit system serving the city, it will consist of six metro lines spanning a total length of 176 kilometres and host 85 stations. The project will cost $22.5 billion to build and is scheduled to open in 2019. “Working with the BACS consortium, made up of Bechtel, almabani, CCC and Siemens, which is responsible for the design and build of lines one and two of the Metro, we are operating as blasting and coating applicators, providing blasting and painting management and personnel, and applying passive fire protection to the project. We have been a part of the Riyadh Metro project for approximately one year now and our work remains ongoing as we continue to be awarded new packages to complete.”

Back at its port home, and at Jeddah Ship Repair’s facilities, Dammam Shipyard is busy working on projects for the Saudi military. For the Royal Saudi Navy’s Eastern Fleet, it is in the process of completing a water-chilled AC refurbishment contract, while for the Western Fleet it is carrying out DCNS work. At the same time, it continues to support those drilling contractors and jack up rig operators working with Saudi Aramco, as well as providing repairs and maintenance for handling tug boats, crew boats and dredgers operating in the area.

While the steep decline and subsequently slow rebound of oil prices in recent years has caused widely publicised disruption and pain to much of the industry, Dammam Shipyard hasused the time constructively, investing capital in order to transform into a leaner, stronger entity. Supported by its shareholders, it has a long-term vision for its future growth, part of which is to target those EPCI contractors who enter into long-term agreements with Saudi Aramco for the building and maintenance of jackets and offshore platforms.

“I personally came into the shipyard four years ago and at that time it was essentially a dead yard for all intents and purposes,” Jason says. “In the time since our team has completely changed the face of the business, bringing in new talent, systems and processes, which I believe has given us an excellent foundation to build upon. As far as the future is concerned, our aim is to evolve our offering, expand the size and capability of the yard, and target the inevitable increase in fabrication and maintenance work that will accompany Saudi Vision 2030.

“We believe we have achieved something special by not only surviving, but prospering in one of the toughest markets known and we want to build upon this through further investment to the dock, our workshops, our cranes and so forth. We are currently discussing this with the Port Authority, who are very conducive towards our ideas. Competition in this market will only get stronger and more intense, but we will continue to work with all of our customers, providing them with the best service possible and leading turnaround times. This is what Dammam Shipyard is all about, doing a fast, quality job at a competitive price.”